The narwhal’s unusual tusk clearly didn’t grow by accident—but what is it there for?

Like the horned white horses of ancient lore, narwhals, called the unicorns of the sea, are mythical—or at least nearly so. In remote areas around the Canadian Arctic and Greenland, these elusive whales dwell in an ice-covered region cloaked in darkness for half the year.

Most people recognize narwhals by their famous long tusk. But when asked to explain the tusk’s purpose, most people don’t have a clue. Even scientists aren’t fully sure. But such a prominent feature—a 9-foot (2.7 m) tooth—doesn’t arise by chance and keep getting passed down as a defining family feature unless there’s a reason. We just don’t know what it is yet.

One thing is certain: our imaginative Creator God made all kinds of “great sea creatures” on day five of creation week, and the amazing variety of their descendants continually invites us to explore them further.

Long in the Tooth

What do we know? The tusk is actually a giant canine tooth, like those on walruses, hippopotamuses, and elephants. But unlike animals with curved tusks, the narwhal sports the only straight tusk in the world. And what a tusk! It can grow to over half of the narwhal’s average length of 15 feet (4.5 m).

Though mostly male narwhals grow tusks, around 15% of females also develop them. When it comes in, the tusk protrudes through the narwhal’s upper lip and grows in a spiral design. (Adding to the strangeness, it’s the only tooth that erupts through their gums.)

The structure of the narwhal's tooth is very different from ours. In fact, if you consider our teeth the standard, the narwhal’s tooth is inside out. God designed our teeth with an outside layer of enamel—the hardest substance in the body. Enamel shields the next layer, the dentin, which contains millions of microscopic tubes that make it elastic and porous. Dentin forms a protective barrier for the sensitive inner part of the tooth, the pulp. The pulp contains nerve tissue, which no human wants exposed. Let’s just say if the dentist’s drill hits the pulp, it’s not pretty!

The narwhal’s tooth is distinct from ours, with a flexible, sensitive outer layer and a rigid inner layer. Cementum, a durable, porous substance, covers the dentin. Like the dentin on human teeth, thousands of tiny channels run to the nerve-containing central pulp.

It seems the purpose of such a unique tooth would be obvious, but researchers can only take stabs at how narwhals use their tusk.

While frolicking in the cold water, males stick their tusks straight up out of the water and even wave them around, perhaps in some kind of communicative display. Sometimes they cross their tusks peacefully, but some bear scars from “sword fights,” leading scientists to believe that the tusks are used, to some extent, for sexual display. 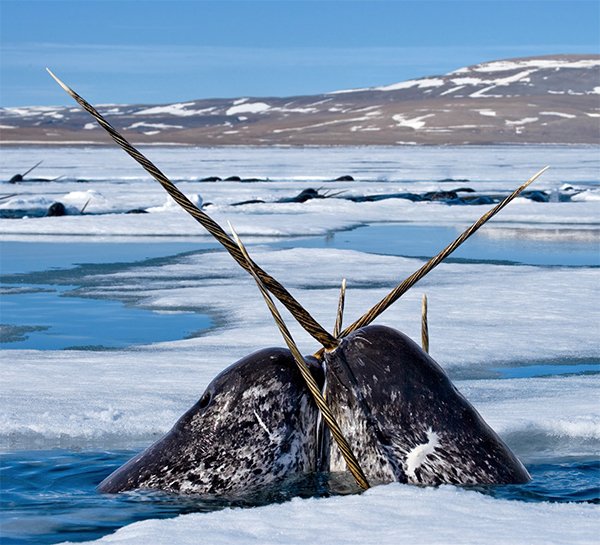 Though researchers still debate the main purpose of narwhals' unusual tusks, males sometimes spar with them.

The most intriguing hypothesis comes from a research dentist who conducted tests on captured narwhals. When he poured fresh or salty water on a tusk, the narwhal’s heart rate increased as if it were stressed or stimulated. From this test, researchers suppose that the hypersensitive tusk can detect changes in water temperature, pressure, and even salinity.

Because salt concentration fluctuates in freezing or thawing seawater, narwhals might use their tusk as a sensory device to determine if they are near freezing or closing ice. After diving thousands of feet for halibut and flounder, narwhals have little time to find air when they return to the surface under the ice. Could the tusk help them lock in on a small opening in the ice at the last minute?

Recently, drone footage revealed another interesting scenario. Narwhals were filmed striking fish with their tusks before swallowing down the stunned prey. Perhaps this tusk is a multipurpose tool for the narwhal, like a Swiss Army knife.

Getting to the Point

In many ways, the narwhal is just another whale, in the same family as belugas. Narwhals and belugas can, in fact, interbreed, so it appears that they belong to the same created kind. The narwhal’s distinctive tusk may have arisen later, among the varied descendants of the original whales. Although we cannot rule out an ancestral tusk for toothed whales, it seems likely that the tusk arose later. But we don’t find any fossil remains of narwhals until very recently, long after Noah’s flood.

Since evolutionists can’t even explain what the tusk is for, they have a challenge trying to explain how this strange feature arose and persisted for millions of years. Creationists, on the other hand, know from God’s Word that he designed all things for a purpose, and he gave many creatures the genetic ability to diversify and fill diverse habitats, such as the cold Arctic (which may not have existed before the flood).

Like so many other creatures with unusual features—such as the armored pangolin, the proboscis monkey with the over-sized nose, and the duck-billed platypus—the narwhal’s eccentric tusk magnifies God’s creativity and challenges us to reconsider our assumptions about the way things should be. Unlike the elusive unicorn of the sea and the mystery of its tusk, God’s glory is evident throughout his creation. 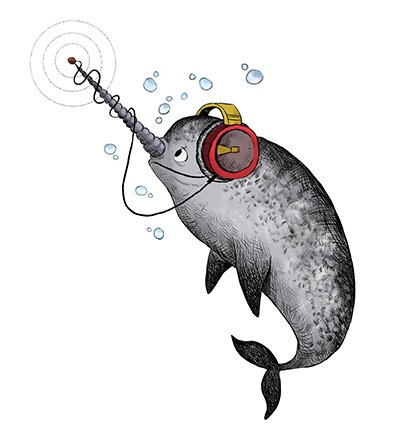 The narwhal’s tooth has a hypersensitive outer layer that researchers think can detect changes in water temperature, pressure, and even salinity.

Some narwhals grow two tusks, but the right one usually extends asymmetrically to the left one.

Narwhals communicate by clicks and other noises. Some sound like squeaky doors or deflating whoopee cushions. These sounds can be unique to each individual.

The narwhal’s tusk is the only tusk with a spiral twist, fueling stories that a unicorn tusk does exist in nature.

Narwhal means “corpse whale,” alluding to the whale’s white skin. The narwhal's tusk is actually a giant canine tooth that can grow to over half of the narwhal’s average length of 15 feet (4.5 m).

A Danish king commissioned a throne to be built of narwhal tusks for a coronation in 1671. The throne can still be viewed during tours of Rosenborg Castle in Copenhagen, Denmark. 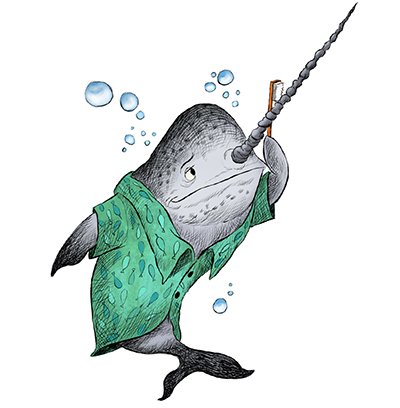 Dr. Joe Francis, dean and chairperson at The Master’s University, earned his PhD from Wayne State University and completed a post-doctoral fellowship at the University of Michigan Medical School.
Next Article There's a Map for That—Human Cell Atlas

An engineering feat that far surpasses landing a man on the moon is taking place all around us.