Few animals have names more misleading than the horseshoe crab. It is not, in fact, horseshoe shaped. If pressed to describe its form, you might blurt out “frying pan” or “lollipop.” For that matter, it’s not a crab either but is classified as an arachnid, more like an underwater scorpion than anything else.

These creatures have “aged” well—their appearance hasn’t changed much over the years. In fact, horseshoe crabs are known as living fossils, creatures that closely resemble their fossilized ancestors. Creationists and evolutionists alike note that horseshoe crab fossils look almost identical to living specimens. Evolutionists claim that the first horseshoe crabs showed up in the fossil record 445 million years ago, but biblical creationists know that the earth is only around 6,000 years old, and no fossils are much older than the time of the flood (about 4,400 years ago).

God’s design for this crab is, in turn, provision for us. The horseshoe crab’s intriguing designs make it a medical marvel, benefitting humans and animals alike and presenting Christians with a unique opportunity to mitigate the effects of the curse by wisely stewarding God’s creation.

The Eyes Have It

One of the most uniquely designed features of the horseshoe crab is its visual system. It has 10 eyes, the two largest of which are the lateral compound eyes with about 1,000 photoreceptors each. These lateral eyes contain rods and cones similar in structure to human eyes, though human eyes are simple, not compound. The similarities between horseshoe crab eyes and human eyes have led to a better understanding of human vision.

Two eyes on the horseshoe crab’s underside near the mouth help it keep its orientation while it’s swimming. Finally, an “eye” (an interconnected series of photoreceptors) on the tail serves as an aid in helping the animal keep its day and night cycles synchronized.1 For an alleged “primitive creature,” the horseshoe crab boasts an abundance of design features perfectly suited for it to survive and thrive.

Perhaps the most interesting aspect of this creature’s design is its blood, which is bright blue due to a high concentration of copper. If you’ve ever had an injection, vaccination, or surgery, you have most likely benefited from the horseshoe crab.

For the past 40 years, this blue blood has been at the center of an indispensable diagnostic test for endotoxin. Endotoxin, a component of some bacteria, causes a severe immune response in humans and many animals. If it enters the bloodstream, endotoxin can cause fever, toxic shock, and even organ failure. Many vaccines, IVs, and implanted devices (such as pacemakers and artificial knee joints) potentially can carry traces of endotoxins even after sterilization and must be screened for its presence. When vaccines, devices, and other implements are tested for sterility, the horseshoe crab blood clots in the presence of endotoxin.2

In addition to being diagnostic for endotoxin, horseshoe crab blood can detect beta-glucans, which may indicate fungal infections within hours, whereas conventional diagnoses can take up to a week.3 Horseshoe crabs have definitely been a medical miracle for mankind.

Since diagnostic tests require actual blood from horseshoe crabs, the creatures have become a staple of the medical industry. They are raised in aquacultures or caught commercially and then bled in laboratories. Horseshoe crabs can afford to “donate” up to a third of their blood at a time, but that much bloodletting is risky for the crabs. An estimated 10–30% of horseshoe crabs that are used for medical bleeding don’t survive when returned to the water, and those that do survive struggle to thrive. Since the 1980s, restrictions have been placed on harvesting horseshoe crabs for commercial or biomedical research, and state parks and national sanctuaries have been designated to help ensure that crab numbers do not decline. 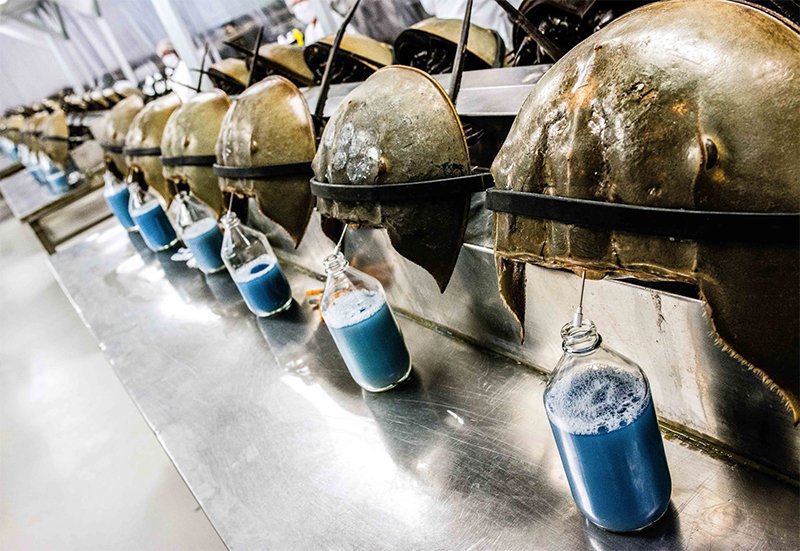 Scientists harvest the bright blue horseshoe crab blood to test for contaminants in injected medicines, such as vaccines.

The horseshoe crab’s enduring design is confirmation of God’s provision both for this unique creature to survive and for humans to benefit from its design.

The horseshoe crab’s enduring design is confirmation of God’s provision both for this unique creature to survive and for humans to benefit from its design. But we are reminded in Scripture that “a righteous man regards the life of his animal, but the tender mercies of the wicked are cruel” (Proverbs 12:10 NKJV). Compassionate animal care is a biblical principle of creation stewardship. As we work to mitigate the effects of the curse, may we be counted as good and faithful stewards (1 Corinthians 4:2) of the resources God has given us, including the horseshoe crab.

Troy Lacey earned his bachelor of natural sciences (biology/geology) degree from the University of Cincinnati. Troy is a science writer on AiG’s content support team and is the chaplain services and prison ministry coordinator for AiG–USA.
Next Article Sublime Slime 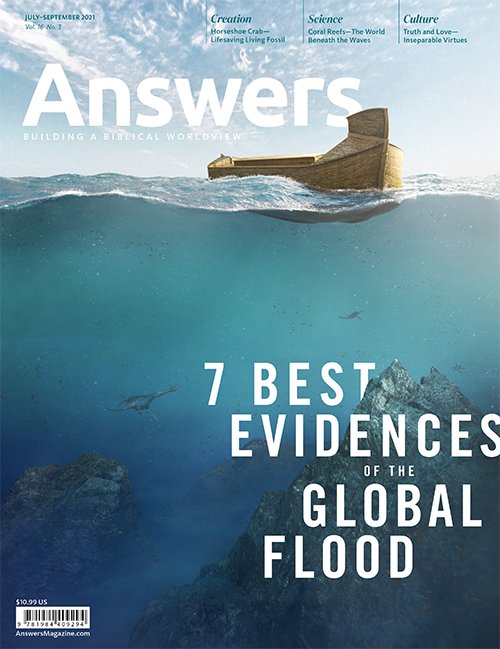 The earth is scarred with evidence of the worldwide flood in Genesis.