What makes orcas so successful at filling the oceans? If you think it’s their size and strength, listen up.

The captain of the fishing vessel Oracle knew he was in trouble when he sighted orcas on the horizon. He was right. In a coordinated attack, dozens of the huge mammals made off with 12,000 pounds of halibut on his lines and cost him 4,000 gallons of fuel trying to save the rest of his day’s catch from the interlopers. They even seemed to be teaching their young how to get a free meal. On another day, 50 orcas followed his boat for 65 miles and then loitered for 18 hours after he shut the engines down. After waiting two days, he had to abandon that fishing trip altogether.

Orcas, or killer whales (Orcinus orcas), have been hugely successful at obeying God’s command to fill the earth. They are found at every latitude on every major ocean and live in large communities off Norway, British Columbia, Japan, Antarctica, and other locations. Their secret? They are killer communicators!

You might think the orcas’ success is due to their strong, sleek bodies and sharp teeth. But these majestic cetaceans really owe their success to their advanced social skills. True, a single orca can best a great white shark, and small groups sometimes feed on other, much bigger whales, but most don’t prey on large sea creatures at all. Most orcas live in highly structured societies and work together to feed exclusively on small fish.

Off the coast of Washington and British Columbia, researchers have identified three major groups of orcas: residents, offshore orcas, and transients. The residents live in groups near shore, and the offshore orcas live farther out to sea. They congregate into groups called clans and pods.

Each pod produces its own distinct sounds. Yet each pod is part of a larger clan that has its own dialect.

Each pod of up to 20 orcas is led by several mothers. In fact, a male orca will often stay with his mother’s pod and swim by her side for her entire life. Each pod produces its own distinct sounds. Yet each pod is part of a larger clan that has its own dialect. Researchers believe that each clan was most likely started by a female who established a pod with its own dialect. The dialects are so specific that the different clans do not communicate with each other. For instance, the resident orcas in the Pacific are divided into the northern and southern communities, but the two communities apparently do not even understand each other’s dialects.

The transients are less well organized, and live in smaller groups of only two to five. They do not speak with or associate with pods or clans. Transients are very aggressive and often attack larger animals. Such behavior is common among social mammals in our fallen world, where outcasts are often violent and unpredictable.

The type of food varies as well. Genesis 1 teaches that all animals originally ate plant material, but after the Fall many creatures began eating each other. And the food choices vary based on convenience.

The resident pods off Washington State eat salmon, for example, but the pods near Norway eat herring. Hunting strategies vary. The Norway orcas surround schools of herring, turning their white bellies toward the fish while swimming around them. This corrals the herring into a tight, rapidly spinning column. The orcas then tailslap the water to stun or kill their prey and eat the fish one at a time.

Surprisingly, humpback and fin whales join in on the orcas’ feast and actually disrupt some of their corralling work. Nonetheless, the orcas ignore these intruders. There is plenty of food for all.

The orcas’ communication and support network extends far beyond these hunting expeditions and the needs of a single pod. Bonds extend throughout the community. In one case, female orcas from many different pods worked together in an undersea “meals on wheels” to feed a young male who couldn’t fend for himself because his dorsal fin was badly damaged in a boat incident.

A God of Relationships

The orcas’ strong family structure, rather than their killer instinct, is behind their success. This is no surprise, given what the Bible says about the Creator. God made family the foundational unit of human society, and he designed many animal societies that way as well. 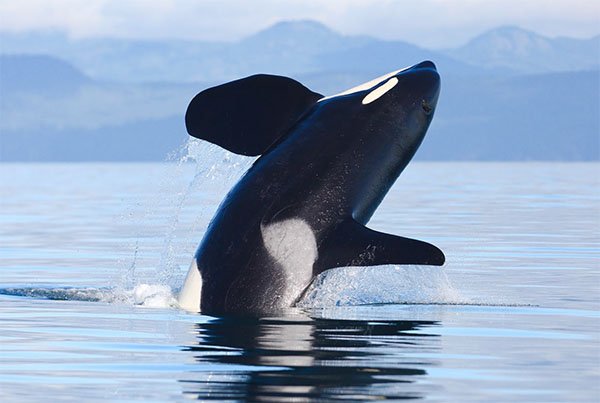 Researchers are not sure why orcas breach, or leap high out of the water. It may be a form of enjoyment or celebration.

The importance of the orcas’ language also reflects the Creator’s handiwork. God spoke the universe into existence and chose to communicate with humanity through language. He desired human beings, made in his image, to communicate as well. He even identifies his Son, Jesus Christ, as the Word. So it shouldn’t surprise us to see communication in varying degrees throughout creation.

How wonderful to see God’s relational nature reflected in this way! Our first reaction to these wild and fearsome creatures is to consider the Creator’s power and majesty. But when we look closer at the way they communicate and care for one another, we also see reminders of his tenderness and love. 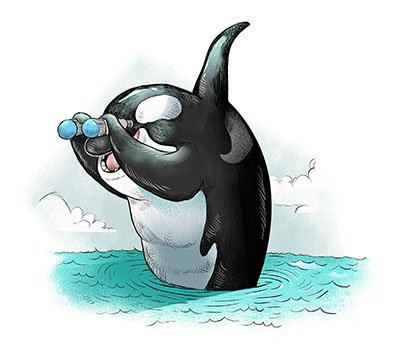 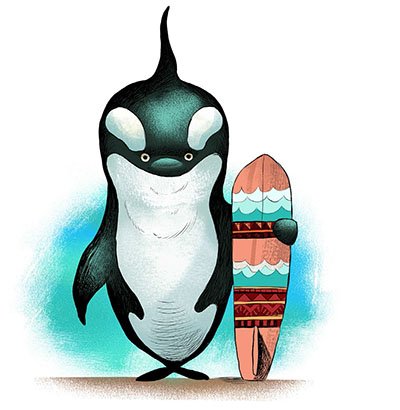 Dr. Joe Francis, dean of the school of science, math, and health at The Master’s College, earned his PhD from Wayne State University and completed a post-doctoral fellowship at the University of Michigan Medical School.
Next Article Tuxedo-Tailed Deception

Dr. John Whitcomb explains the timeless truths that will help us reach the next generation with God’s message of redemption.