Did Eels Evolve Better By Biting?

Aquatic animals face some special challenges as they eat, for they must get their food into their mouths and swallowed before it washes away. Many grab it with their teeth, but the majority of aquatic vertebrates suction food into their mouths. Evolutionary researchers comparing eels that suck in their prey to those that nab it with their teeth report they have shown that the evolution of biting behavior opened the door to the enormous biodiversity in the skull shapes of other vertebrates.

This eel, a whitespotted conger, suctions food into its mouth. Like all such suction feeders, it possesses an optimal collection of anatomical designs that enable it to rapidly increase the volume of its mouth and vacuum in the food-containing water near its mouth. Image by Rita Mehta, via University of California Santa Cruz.1

“When you look at the skulls of biters,” explains UC Santa Cruz evolutionary biologist Rita Mehta, whose team conducted the research, “the diversity is astounding compared to suction feeders.” Vacuuming in your dinner is a process that has less room for variation than biting.

Mehta’s team compared the anatomy of 32 species of eels that bite their prey and 27 suction feeders. Their goal was not only to learn how much diversity was possible in each group but also to determine how losing the anatomical constraints of the more complex feeding strategy—suction—might have enabled greater evolutionary diversity to develop. The suction feeding eels they studied turned out to all have essentially the same skull shapes, with far more minor variations than those in the biters. Therefore they conclude that—because only a certain set of skull characteristics can produce successful suction—evolution produced the same result over and over and over again.

“The biters are three times more diverse than the suction feeders. It's an incredible increase in diversity just from a shift in feeding strategy,” Mehta said. “The suction feeders evolve the same traits over and over again, whereas the biters go in a lot of different directions.” 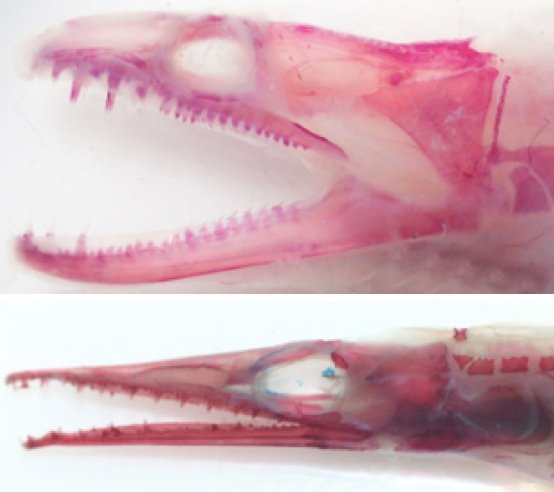 These two eels, a Kikado moray (above) and a short-tailed pike conger (below), grab food with their teeth. They do not rely on the coordinated anatomical constraints needed to generate suction. Therefore a more diverse range of skull designs is possible in biting eels. Image by Rita Mehta, via University of California Santa Cruz.2

Vacuuming in the Victuals

In order to suction in its food, a fish must coordinate the movements of several parts of its skull to rapidly increase the volume of its mouth, thus creating a vacuum sufficient to generate a strong flow of water when it opens its mouth. It must drop the floor of its mouth downward, for instance, while expanding the gill chambers, and all the necessary movements must be coordinated properly or the system fails to function. Accordingly, suction feeders generally have short skulls, strong jaws, a well-developed hyoid bone on the floor of the mouth cavity, and large bony flaps (opercula) covering the gills. “All these different parts of the anatomy have to work together to generate suction, so there are only a few ways you can evolve suction feeding,” explains Mehta. “Biters have hyoids of all different sizes, short and long skulls, all types of teeth in different places in the mouth cavity—it's a much more variable and flexible feeding strategy.”

Some eels and other fish combine suction and biting, typically grabbing their food with their teeth and then sucking it down their throats. Others exhibit more unusual designs. Moray eels, for instance, have an extra set of teeth to help them swallow without the need to generate suction at all. “Moray eels are the outliers,” explains Mehta, “really pushing the envelope of morphological space to the extremes. Biting and suction are not mutually exclusive—many biters still use suction to swallow their prey—but morays have lost suction altogether.” We must point out here, however, that observational science cannot demonstrate that moray eels “lost suction” or that they ever had it. Observational science only shows that they do not have it now and that they instead possess an anatomical design that enables them to swallow without suction.

The authors of the report in Nature Communications have nicely demonstrated that more biodiversity is possible in the skull shapes of biting fish than in those that require a particular set of anatomical traits to generate effective sucking force.3 But they have not, as they suggest, demonstrated that evolution of biting anatomy was the watershed event that opened the way for many kinds of vertebrate skull shapes to evolve on the way up the evolutionary tree.

Indeed, they acknowledge that their conclusions “preclude testing”:

Variation observably occurs within each kind of animal as genetic information is reshuffled and expressed and selected. Nevertheless, the evolutionary authors assume that such variation illustrates an evolutionary process that could produce greater complexity in completely new kinds of animals, even though such a process would require the unprecedented acquisition of new genetic information. They write:

Our results suggest that functional integration can play an important role in driving one of the most intriguing patterns in macroevolution.5

Yet biological observations have not demonstrated any way such macroevolution could occur, no matter what functional engineering marvels supposedly drove it.

Suction feeding is, as the authors note, a very complex operation. Though the authors simply assume that a particular set of anatomical features had to evolve into simultaneous existence to make suction feeding possible, they cannot explain how a hypothetical common ancestor acquired the information to produce all of these features, much less to do so through random processes all at the same time. The irreducible complexity of suction feeding anatomy is a much better argument for the existence of an intelligent designer than for a fortuitous bit of evolutionary magic even once, let alone multiple times. And from the history in God’s Word, which fits the observable way animals reproduce and vary only within their created kinds, we know who that intelligent designer is: the Creator God who has told us the truth about the origin of all things about 6,000 years ago in the Bible.

We cannot know for certain now how many kinds of eels God created in the beginning, or even how they each ate. However, because it is clear from the Bible that the original world God created was a good one devoid of death and suffering, we can be confident those fish did not rip their fellow creatures to shreds but used the feeding designs God gave them to meet their nutritional needs in other ways. The variety of feeding strategies among eels today—those that suction their food, those that grab it with their teeth, and even the moray eels that have an extra set of back teeth to gain a particularly powerful purchase on their prey—are built on the information available in the genomes of those original kinds, not the result of random processes of molecules-to-man evolution.

When we look around at our sin-cursed world, “red in tooth and claw,” and perhaps wince a bit when we watch a television program showing a moray eel tearing into its victim, we should be reminded that the death and suffering we see was not part of the world that God “saw was very good” (Genesis 1:31). Defense and attack structures were not necessary in that very good world, but God in His wisdom made provision for the needs of His creatures, all designed mature and fully functional in the six days of Creation week about 6,000 years ago. We see in biology that animals vary and develop diverse species, but in accordance with what the Bible teaches in Genesis 1 they only do so within their created kinds.

Death and suffering and the violence that increased as animals adapted to the curse of man’s sin (Romans 8:20–22) are the result of our rebellion against our Creator. God made provision for His creatures to cope with sin’s curse on this world. But He has done something far more remarkable for His human “creatures,” the only ones He made in His own image. God sent His Son Jesus Christ to die for our sin so that all who repent and trust in Him can be restored to a right relationship with Him and someday spend eternity in a world without tears or suffering or death, at home with the Creator who loves us.