Photo from the Creation Museum

When Charles Darwin wrote his famous book On the Origin of Species, he was in essence writing a history concerning death. God’s Word presents a different view.

“Annie’s cruel death destroyed Charles’s tatters of beliefs in a moral, just universe. Later he would say that this period chimed the final death-knell for his Christianity. … Charles [Dawin] now took his stand as an unbeliever.”1

From his evolutionary perspective on the origin of life, Darwin recognized that death had to be a permanent part of the world.

When Charles Darwin wrote his famous book On the Origin of Species, he was in essence writing a history concerning death. In the conclusion of the chapter entitled “On the imperfections of the geological record”, Darwin wrote, “Thus, from the war of nature, from famine and death, the most exalted object which we are capable of conceiving, namely, the production of the higher animals, directly follows.”2

From his evolutionary perspective on the origin of life, Darwin recognized that death had to be a permanent part of the world. Undoubtedly, he struggled with this issue as he sought to reconcile some sort of belief in God with the death and suffering he observed all around him, and which he believed had gone on for millions of years.

This struggle came to a climax with the death of his daughter Annie—said to be “the final death-knell for his Christianity”.3

Belief in evolution and/or millions of years necessitates that death has been a part of history since life first appeared on this planet. The fossil layers (containing billions of dead things) supposedly represent the history of life over millions of years. As Carl Sagan is reported to have said, “The secrets of evolution are time and death.”4

This phrase sums up the history of death according to those who believe in evolution and/or millions of years. In this system of belief:

This phrase sums up the history of death according to the Bible. From a perspective of the literal history of the book of Genesis, there was a perfect world to start with—described by God as “very good” (Genesis 1:31)—but it was marred because of Adam’s rebellion. Sin and its consequence of death entered the world that was once a paradise (Romans 5:12 ff., 8:20–2; 1 Corinthians 15:21–22).

In 1 Corinthians 15:26, Paul describes death as the “last enemy”. And that’s the point—death is an enemy—it’s an intrusion. The death of man and the animals was not part of the original creation.

Even though death reigns in this present world, one day in the future there will be no more death: 'And God shall wipe away all tears from their eyes; and there shall be no more death, neither sorrow, nor crying, neither shall there be any more pain: for the former things are passed away' (Revelation 21:4).

In reality, the battle between Creation and evolution, between young Earth and old-Earth views, is in fact a battle between two totally different histories of death. 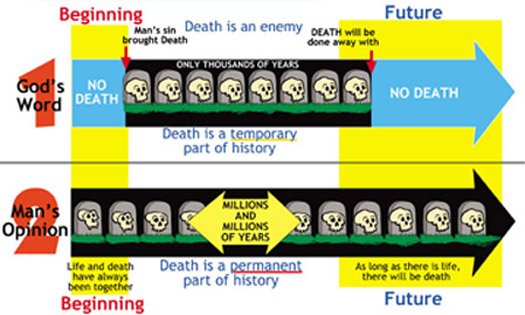 For the Christian, which history of death you accept has major theological implications.

This view of history, if consistently applied, would lead to the situation summed up by the heretical Bishop John Shelby Spong:

“… But Charles Darwin says that there was no perfect creation because it is not yet finished. It is still unfolding. And there was no perfect human life which then corrupted itself and fell into sin … . And so the story of Jesus who comes to rescue us from the fall becomes a nonsensical story. So how can we tell the Jesus story with integrity and with power, against the background of a humanity that is not fallen but is simply unfinished?”5

Bishop Spong accepts the history of death over millions of years. As a result of this, he cannot accept a perfect creation that was marred by sin. Thus, the groaning (death and suffering, etc.) we observe today has continued for millions of years. This is also true of all “long-age creationists”. These are those who accept the secular belief in an old world, while opposing evolution in favour of “progressive creation” or “intelligent design”.

2. However, if a Christian accepts the history of death as given by a literal reading of the Genesis account, then this history can be represented by the following diagram:

The perfect creation with no death, disease or suffering is described as “very good.” The Bible makes it clear that God does not delight in death. We read in Ezekiel 33:11, “Say unto them, As I live, said the Lord God, I have no pleasure in the death of the wicked; but that the wicked turn from his way and live: turn you, turn you from your evil ways; for why will you die, O house of Israel?” God takes no pleasure in the afflictions and calamities of people (death etc.).

The Bible makes it obvious that death is the penalty for our sin. In other words, it is really our fault that the world is the way it is—God is a loving, merciful God. When we sinned in Adam, we effectively said that we wanted life without God. All of us also sin individually (Romans 3:23). God had to judge sin, as He warned Adam He would (Genesis 2:17, cf 3:19). In doing so, God has given us a taste of life without Him—a world that is running down—a world full of death and suffering. As Romans 8:22 says, “the whole creation groans and labours with birth pangs”. Man, in essence, forfeited his right to live.

However, even though we are sinners, those who have turned from their sin and trusted Christ for forgiveness will spend eternity with their Creator in a place where righteousness dwells—and there will be no more crying, suffering or death.

The true history of death, as understood from a literal Genesis, enables us to recognize a loving Creator who hates death, the enemy that will one day be thrown into the lake of fire (Revelation 20:14).

Which history of death do you, the reader, accept? Is it one that makes God an ogre responsible for millions of years of death, disease and suffering? Or is it one that correctly places the blame on our sin, and correctly represents our Creator God as a loving, merciful Saviour who wept at the tomb of dead Lazarus (John 11:35)?