Granites … They Didn’t Need Millions of Years of Cooling

The timescale and conditions for the formation and cooling of granites are totally consistent with a 6,000–7,000 year-old earth and a global cataclysmic flood 4,500–5,000 years ago.

An oft-repeated objection to the earth’s being only 6,000–7,000 years old is that large bodies of magma (molten rock) supposedly require millions of years to accumulate and cool inside the earth’s upper crust to form granites.1,2,3 Exposed at the earth’s surface today due to erosion, these large bodies of granites (plutons) sometimes cover hundreds of square kilometres. It is thought that up to 86% of the once-molten rocks which have intruded into the upper crust are granites.

Deep in the lower crust, the temperatures sometimes reach 700–900°C. This is high enough to melt the rocks locally, particularly if there are high pressures, thus generating large ‘blobs’ of granitic magmas. Recent research indicates that the amount of water which can dissolve in granitic magmas increases with depth because of increased pressure.4 Thus more than 10% of the magma weight may be dissolved water.

Once molten, the ‘blobs’ of magma are ‘lighter’ than the surrounding rocks so the magma tries to rise, not slowly as large ‘blobs’ as once thought, but squeezed through fractures to be rapidly injected into the upper crust.5,6 The water in the magma makes it less viscous (more fluid), greatly helping its flow into and along fractures.7 Calculations indicate that the magma could ascend at more than 800m per day.8 At that rate, the 6,000 cubic kilometre Cordillera Blanca pluton of north-west Peru could have been formed by magma injected from more than 30km depth through a 6m wide and 10 km long fracture conduit in only 350 years.9

Plutons exposed at the earth’s surface were once thought to extend many kilometres down into the lower crust. This would imply that an enormous amount of heat needed to be dissipated as the original magmas cooled, thus requiring millions of years. However, geophysical investigations have revealed that many plutons are only a few kilometres thick, and some are made up of thin (100–1,000m) sheets stacked on top of one another10—for example, the Harney Peak Granite pluton that includes Mt Rushmore in the Black Hills, South Dakota, where the famous president’s heads are carved.11 This discovery of itself greatly diminishes the cooling ‘problem.’ 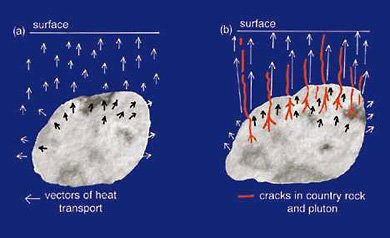 Figure 1. Cooling of a pluton by (a) conduction and (b) convection. The sizes of the arrows are proportional to the rate of heat flow to the surface. Convection dissipates the heat along fractures very quickly.

Research has also shown that the higher the water content of a magma, the faster it will cool.12 This is simply explained. As the magma cools and the granite crystallizes, the contained water comes out of solution. But it is still very hot and confined as steam by the surrounding cooling granite, and the country rock. As continued cooling occurs and more water is released, the pressure inside the forming pluton increases to the point where the water can no longer be confined, so it is driven by the heat outwards towards the crystallized granite at the pluton’s margins and escapes into the surrounding country rocks by fracturing the granite.13 In so doing it takes heat with it outwards along fractures also in the country rocks (Figure 1). At the same time, cooler water in the country rocks can seep inwards into the pluton, where it is heated and then circulates out again, taking more heat energy with it. Thus what is known as hydrothermal circulation is established.14 As the cooling front advances deeper and deeper into the heart of the hot pluton, the cracking and hydrothermal circulation also move inwards, and thus the pluton rapidly cools.

Previously, it had been assumed that cooling of plutons was only by way of conduction. So it is not surprising that calculations suggested millions of years were needed (Figure 1). That process can be likened to the cooling of a hot potato which is surrounded by a thick blanket. The heat from inside the potato takes a lot of time to work its way to the surface of the potato, and then to work its way through the blanket. Now suppose that we remove the blanket. The potato will cool more rapidly. Now let us slice the potato. Immediately, we see steam come out, and rise in a column. This indicates that not only is heat rapidly leaving the potato, but the heat transfer now is mostly by convection. It is the circulation of air near the potato which is largely responsible for its cooling. Of course, if we want to cool the potato still faster, we can pour ice-cold water into it after we slice it.

In many ways, the buried pluton is like that hot potato. If only conductive cooling is allowed, heat can only work its way out slowly from within the pluton, through the thick layers of rock enclosing it, and to the surface (Figure 1). Now consider what would happen if the thick layers of enclosing rocks became cracked. Water would naturally percolate through the rocks, and this would speed up the cooling of the pluton. The very heat supplied by the pluton would help drive the circulation of water, and hence the ‘carrying-away’ of the pluton’s own heat (Figure 1). Now let us take the analogy of the potato further. Permit not only the surrounding rock layers to crack, but also allow the pluton itself to crack as it cools. This makes it possible for ground water to percolate right into the hottest regions of the very interior of the ‘hot potato’ pluton.

How rapidly then does cooling occur? Based on mathematical cooling models, the time to cool a large pluton falls from several million years to only a few thousand, at most.15,16,17 The most recent models actually enable the cooling to be computer-simulated,18,19 but the timescale for cooling is still only hundreds to a few thousand years, depending on the sizes of plutons.20

Is there evidence that ancient plutons have been largely cooled by convective water cooling? Definitely. The rock layers in contact with granites often contain chemicals which show that water has been greatly involved in cooling of the granites.21,22 Virtually all plutons are dissected by cracks of various sizes.23 In fact, it is next to impossible to locate uncracked granites! Many granitic bodies contain mineral-filled cracks, clearly proving that water has once flowed through them (the minerals crystallized out from a water solution). Furthermore, under special lighting, seemingly-intact granite samples show previously-filled channels between the major mineral components.24 Some granitic minerals, such as quartz, show evidence of having cooled under fluctuating temperatures. This is all consistent with rapid water-induced cooling, not slow-and-even cooling over millions of years.

To begin with, the amount of heat to be dissipated by rapidly-cooling plutons is not great. A large granite body will heat to boiling point only about its equivalent mass in water. This means that there is plenty of water on earth to have carried away the heat of cooling plutons. Most of the earth’s water would be unaffected by the heat of the world’s plutons undergoing cooling during and shortly after the biblical Flood. Nor would rapidly-cooling plutons cause excessive local heating. Simple computations show that the heat given off at the surface by a large granite body cooling in 3000 years would be only half the rate of the heat emitted in a modern geothermal field in Iceland.25

Millions of years are not necessary for the formation and cooling of granite plutons. New evidence shows that thick plutons are not the result of one-time slow intrusion of great amounts of magma into the earth’s upper crust. Instead, they are the result of rapidly-injected coalescing sheets of magma. Each of these sheets probably at least partly cooled independent of the other sheets, thereby greatly accelerating cooling. Less than 3,000 years would be needed to cool most plutons, and the vital ingredient is water in the magma and in the surrounding rocks. Thus the timescale and conditions for the formation and cooling of granites are totally consistent with a 6,000–7,000 year-old earth and a global cataclysmic flood 4,500–5,000 years ago.