by Dr. Elizabeth Mitchell on May 9, 2014
Featured in Answers in Depth
Share:
Email Using:
Gmail Yahoo! Outlook Other

“Water world” is a “geological approach to life’s emergence.”

Water world, proposed in 1989, has taken on new life since the 2000 discovery of the “Lost City,” a North Atlantic hydrothermal vent that fits the “prebiotic” conditions originally suggested by NASA astrobiologist Michael Russell. “Knowing the environment from which life sprang and the commonalities between the geochemistry and metabolism can surely help us understand life’s first steep ascents and faltering steps,”1 Russell and his colleagues write. They hope that their “submarine alkaline hydrothermal emergence of life” theory outlined in “The Drive to Life on Wet and Icy Worlds” published in Astrobiology will guide NASA’s ongoing search for alien life.

The Lost City of Life

Lost City is an undersea limestone chimney featuring warm alkaline conditions less extreme than those in many hydrothermal vents. Lost City’s indigenous microbes (Methanosarcinales) thrive on chemicals like methane, sulfates, and nitrates and release substances like carbon dioxide and acetate as waste.1 Water world theory proposes a gentle, basic beginning for life in this ancient oceanic version of a car’s catalytic converter.

Lost City is a chemist’s paradise. Warm alkaline water percolates through mineral-coated microcompartments in the Lost City amidst a sea of slightly acidic ocean brine. Russell’s team believes that when the catalytic capabilities of membrane-like minerals combined with “particular disequilibria”2 of chemicals and contrasting conditions like those in and around Lost City, life was “an inevitable outcome.”3 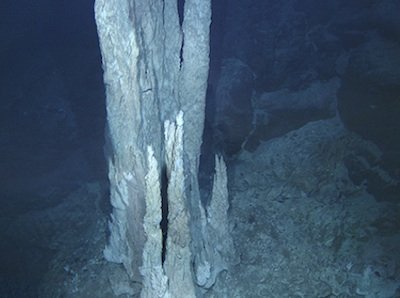 While some hydrothermal vents are places of extreme heat, this limestone chimney in the North Atlantic, dubbed the “Lost City,” provides a gentle, warm, alkaline environment to the anaerobic microbes that thrive there. NASA astrobiologists speculate that life may have evolved from chemicals in such locations because the minerals coating the surfaces act as catalysts for chemical reactions. Image: from D. Kelley and M. Elend/University of Washington through NASA Jet Propulsion Laboratory, California Institute of Technology 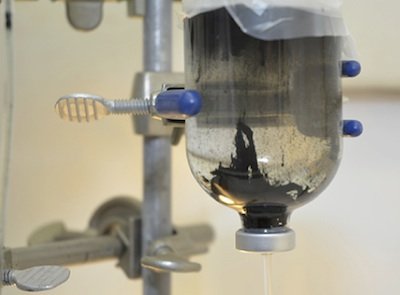 This is a laboratory version of an undersea limestone chimney like that surrounding a warm alkaline undersea vent. Minerals coating its tiny compartmentalized surfaces can catalyze the movement of electrons and protons along gradients, thus catalyzing chemical reactions that store energy or synthesize simple carbon-containing molecules. Image: NASA/JPL-Caltech

Looking for Life Where It Must Evolve

“One reason why NASA works on the question of the emergence of life is because we want to look for life on other planets. But how can we do that if we don’t know how life started on this planet?”4 Russell has said. “Any wet rocky planet will have the same chemical imbalances. We need to understand how that happens before we can look carefully at how life might exist elsewhere.”5

Putting their work in its historical context, Russell’s coauthor Laura Barge explains, “Michael Russell’s theory originated 25 years ago and, in that time, JPL space missions have found strong evidence for liquid water oceans and rocky sea floors on Europa and Enceladus. We have learned much about the history of water on Mars, and soon we may find Earth-like planets around faraway stars. By testing this origin-of-life hypothesis in the lab at JPL, we may explain how life might have arisen on these other places in our solar system or beyond, and also get an idea of how to look for it.”

Like the famous Miller-Urey experiment, nothing in Russell’s decades of research has actually demonstrated evolving life. He does not claim that it has. Nor has this research produced a “prebiotic” chemical storehouse of biochemical building blocks. (As we reported recently, all attempts to devise a “prebiotic chemical” start-to-life have been dismal failures anyway.) Russell’s “geological approach to life’s emergence”6 focuses on ways to drive life’s chemical engines.

Batteries, like those in your flashlight, work because of the disequilibria between compartmentalized substrates for various electron-moving chemical reactions. Life’s inception, Russell believes, would demand similar chemical “tension” between contrasting conditions, such as between alkaline and acidic conditions, coupled with compartmentalized mineral catalysts to complete the circuit and resolve these chemical imbalances. “Life takes advantage of unbalanced states on the planet, which may have been the case billions of years ago at the alkaline hydrothermal vents,” says Russell. “Life is the process that resolves these disequilibria.”

In Russell’s “bottom-up”7 approach to abiogenesis, if energy to drive chemical reactions like those in cells is available, life not only can but must come into existence. Why? Because present-day living things—familiar things sharing our oxygenated world as well as extremophiles metabolically optimized to process methane, hydrogen, carbon dioxide, and minerals in hydrothermal vents—work that way. “The present is the key to the past,”8 Russell says. “Life promotes reactions between molecules that are out of equilibrium to produce more stable molecules. At the same time, it generates a system that continues that process.”9

“We argue here that metabolism was forced to emerge,” Russell and colleagues write, “in such fine compartments to resolve the disequilibrium between the hydrogen and methane delivered in an off-ridge alkaline hydrothermal convection cell, with volcanic carbon dioxide and other oxidized entities such as nitric oxide dissolved in the acidulous Hadean Ocean.”10

Lost City features natural batteries allowing spontaneous movement of protons or electrons. For instance, electrons flow between hydrogen and methane gas driving carbon-capturing chemical reactions that could, Russell’s team contends, have been used to build more complex biochemicals. Also, when protons move from a region of higher acidity toward the alkaline interior of the vent across an iron-containing hydroxide called green rust (fougèrite), chemicals in the water can react to produce a phosphate-containing compound that, in a way analogous to ATP in living cells, stores energy in its chemical bonds. Molybdenum, a trace metal found in our own bodies in association with certain enzymes, is another mineral catalyst found in the Lost City. Electrons can move “two at a time” across molybdenum, making molybdenum, according to Russell, “one answer to the ultimate question of life!”

But just because something can live there, does not show something could have evolved there.

Just dumping life’s building blocks into the right soup wasn’t enough, they surmise, but once the circuit was compartmentalized and completed by natural mineral “nanoengines” in the “Hadean Hydrothermal Hatchery of Life,”11 life got underway. “Within these vents, we have a geological system that already does one aspect of what life does,” explains co-author Laurie Barge. “Life lives off proton gradients and the transfer of electrons.”

Mitochondria—the “powerhouses” of cells—use electrochemical gradients to transfer protons and electrons across membranes to generate usable energy. In fact, the microbes that live in the Lost City derive sustenance from their extreme environment and work to maintain homeostasis. But just because something can live there, does not show something could have evolved there, much less that such abiogenetic production of life was inevitable.

Make It Go but Going Nowhere

“These mineral engines may be compared to what's in modern cars,” says Russell. “They make life ‘go’ like the car engines by consuming fuel and expelling exhaust. DNA and RNA, on the other hand, are more like the car’s computers because they guide processes rather than make them happen.”

And that, actually, describes much of the problem with Russell’s water world theory of life’s origins. Life requires information. Information is necessary to “guide processes.” No amount of chemical energy captured by the natural battery power of chemical gradients in seawater near hydrothermal vents, no “self-organizing” molecular structures, no self-replicating reactions, no meteoric rain of organic gunk, no self-assembling sudsy bubbles, nor the supposed synchronous emergence of all these processes at once—none of these things can supply the information to build living cells or substitute for its absence.

On Mars and on exoplanets as on earth, however, the persistent problem is a lack of information. The study of living things faithfully and consistently demonstrates that living things only come from other living things. This principle is considered a scientific law, a law of nature. Ironically, therefore, when evolutionists insist that life evolved from chemicals through natural processes, here or elsewhere, they are claiming that natural laws operated differently in the past or on other worlds than in the present-day on earth. Doesn’t that fly in the face of the scientific method? Isn’t that rather un-scientific?

What we observe in the natural world—living things reproducing themselves and varying within their created kinds—is consistent with the created world described in the Bible. God tells us in the Bible that He created all things in the course of just six days (Genesis 1 and 2; Exodus 20:11). The Living God who has always existed is the source of all life, the physical universe, all energy, and all information. God did not require a toolkit of stardust or an ocean of chemical batteries to create life but rather had the power to create through His very words, “And God said . . . .”