So you thought borax was just a laundry additive?

While Curiosity continues to search for signs of life on Mars, eager earth-bound evolutionary scientists are out-sourcing the origin of life off-world. In “Planets, Minerals and Life’s Origins,” presented to over 4,000 geochemists at the 2013 Goldschmidt Conference in Italy, Steven Benner asserted that the Martian environment would have supported the molecular evolution of life’s building blocks far more plausibly than the inhospitable early earth.1

Benner believes boron and molybdenum-containing minerals—which have been found in meteorites—acted as catalysts to form and protect the sugar ribose, an essential component of RNA. RNA—ribonucleic acid—is a polymer that copies the genetic code and transforms the coded blueprint into protein. Many evolutionists propose that life got started when ribozymes—RNA functioning as genetic code, enzyme, and protein template—randomly evolved in the prebiotic world. One of the big problems with the RNA World hypothesis has been the inability to explain how significant amounts of ribose sugar could have formed in “prebiotic” conditions.

Benner proposes that early Martian environmental conditions were right to allow minerals like borax (a boron containing mineral) to exist in the oxidized chemical state that could have facilitated ribose formation. “There is hope through mineralogy,” he said, maintaining that catalysts in Martian minerals could have kept nascent organic compounds from degrading spontaneously to a useless gooey mess. Suggesting that ribose, and then RNA built from it, thus formed on Mars, Benner proposes that this RNA hitched a ride to earth on Martian meteorites, seeding the earth for the further evolution of life.

“It's only when molybdenum becomes highly oxidized that it is able to influence how early life formed. . . This form of molybdenum couldn't have been available on Earth at the time life first began, because three billion years ago the surface of the Earth had very little oxygen, but Mars did,” Benner explains. “The evidence seems to be building that we are actually all Martians, that life started on Mars and came to Earth on a rock. It’s lucky that we ended up here nevertheless, as certainly Earth has been the better of the two planets for sustaining life. If our hypothetical Martian ancestors had remained on Mars, there might not have been a story to tell.”2

“Transpermia” is this idea that molecular evolution was so improbable on the evolutionary version of the early earth that the chemical building blocks of life had to form elsewhere in space and then get transported to the earth to seed it and produce life. Benner, like other supporters of this idea that developed decades ago, thinks that the earthly problems impeding molecular evolution could be successfully managed on Mars. 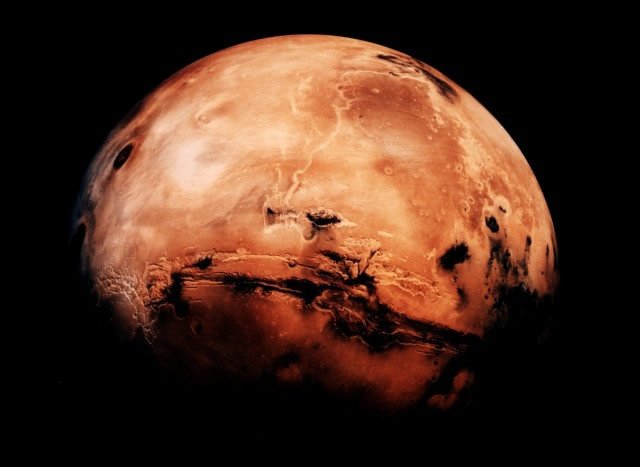 Did the Red Planet provide the raw materials for the evolution of life on earth? The hypothetical process of molecular evolution encounters insurmountable difficulties on earth, so some scientists hope that what couldn’t happen on earth might have happened on Mars. Image by NASA, via Ars Technica.3

Despite the oft-heard mantra that evolution is a proven fact, one of the most insupportable tenets of evolutionary dogma is the notion that life evolved from non-living chemicals through random processes. Benner pointed out several of these problems in his presentation. These include:

The Tar Paradox: Organic molecules, given energy and left to themselves, devolve into complex mixtures, “asphalts” better suited for paving roads than supporting Darwinian evolution. Any scenario for origins requires a way to allow organic material to escape this devolution into a Darwinian existence, where replication with imperfections, where the imperfections are themselves heritable, allows natural selection to avoid a tarry fate.

The Water Paradox: Water is commonly believed to be essential for life. So are biopolymers, like RNA, DNA, and proteins. However, the biopolymers that we know find water corrosive. Any scenario for origins must manage the apparent need of life for a substance (water) this is inherently toxic to life.

RNA and other essential molecules for life (like adenosine triphosphate, ATP) also require bio-available phosphate, another commodity in short supply on the evolutionary version of the primordial earth. Other researchers led by Christopher Adcock proposed in a paper published September 1 that Martian minerals more readily gave up their phosphate to the environment than earth rocks do. The “low prebiotic availability of phosphate may have been a complicating factor in terrestrial abiogenesis,”5 they write. By comparing the solubility of phosphorus-containing minerals in the context of the environments that secular cosmologists think existed on earth and Mars billions of years ago, they “predict phosphate release rates during water–rock interactions on Mars that are as much as 45 times higher than on Earth and phosphate concentrations of early wet Martian environments more than twice those of Earth.”6 They conclude, “We suggest that available phosphate may have mitigated one of the hurdles to abiogenesis on Mars.”7 (The author of another recent primordial phosphate-source hypothesis, Matthew Pasek, incidentally, says Adcock’s model doesn’t supply sufficient phosphate to fire up the evolutionary process.)

But would the presence of ribose and phosphate together for a long enough period of time produce RNA and kick-start the origin of life? Would dropping such chemical goodies onto a lifeless earth get life going? And what was the early earth like? All evolutionist versions of the early earth are based on worldview-dependent assumptions that reject the historical account provided by earth’s Creator in the Bible. Yet nothing that scientists actually observe contradicts that biblical history. Biological observations tell us life only comes from life. And despite evolutionist claims that information can emerge from random processes, observational science shows that genetic information must come from a source of information and does not pop into existence on its own.

Evolutionists like Benner consider the earthly evolutionary problems he outlined to be “paradoxes” because they believe molecules-to-man evolution really happened. They only seek to determine some way that it could have occurred. Likewise, the phosphate problem has had a variety of proposed solutions, Adcock’s only being the most recent.

When scientists begin their inquiries by assuming chemical evolution happened, they ignore or reject the historical account provided by the Creator of life.

There is no scientific evidence, however, that molecules-to-man evolution happened. These so-called “paradoxes” are in fact some of the flaws in the evolutionary effort to explain how life got its start without a Creator. Whether in an earthly sudsy pond, a geothermal pool, a phosphate-rich Martian shore, or a chunk of molybdenum-rich Martian mineral—the serious and multitudinous problems with molecules-to-man evolution remain. No experimental, observational scientific research has ever demonstrated the random emergence of life from lifelessness—abiogenesis. Without abiogenesis, evolution-the-proven-fact cannot even get off the ground.

The fact that some chemical reactions proceed spontaneously, even producing a few of the chemicals found in living things, in no way demonstrates that those randomly produced chemicals could organize themselves into progressively more complex molecules—like RNA and DNA—to carry actual genetic information and instructions in a readable, spontaneously replicating code.

Many secular surveys consider the question of how life began to be one of world’s most important questions. When scientists begin their inquiries by assuming chemical evolution happened, they ignore or reject the historical account provided by the Creator of life. Proposing chemical reactions on Mars that could have produced chemicals like those found in living things does not fill in the fundamental flaws in the evolutionary just-so story of life’s origins. Transferring the insurmountable problems in the earthly evolutionary scenario to Mars does not solve the problems of abiogenesis.

Making Man Without a Martian Toolkit

The Bible tells us that God spoke the earth into existence. On the third, fifth, and sixth days of Creation Week, He created the living components of His creation, fully equipped to function and to reproduce, without waiting for evolution. He made the sun, moon, and stars on the fourth day to serve life on earth. Genesis specifies that God made Adam (the first man) from the dust of the ground and Eve (the first woman) from Adam’s rib. God made the earth and the other planets, but He needed no raw materials from Mars to complete His creation, a process He concluded in just six days. Exodus 20:11—a portion of the Ten Commandments that God wrote on stone tablets Himself and gave to Moses—proclaims, “For in six days the Lord made the heavens and the earth, the sea, and all that is in them, and rested the seventh day.”