Self-assembling virtual crystals are said to show the path to life from lifelessness.

How did life come to exist? Evolutionists have never been able to observe life emerging from non-living components through natural processes, but this first step in molecules-to-man evolution demands an answer. Some hope physicists investigating the properties of inanimate matter will shed light on this evolutionary conundrum.

Materials that, as a result of their structure, convert energy from their environment into motion and then assemble themselves into some sort of organized structure are called active matter. Active matter is not alive, but some think it may hold the secret to life’s beginnings.

Sharon Glotzer and colleagues in the University of Michigan’s Materials Science and Engineering department have been investigating active matter. Such research has applications in the field of nanotechnology, for ordinary assembly procedures are quite ineffective when constructing something a thousand times smaller than a grain of sand. Their work is making headlines, however, for the insight Glotzer and others claim it gives into the mechanism of abiogenesis—the notion that life once evolved from lifelessness—shedding light on “how the first living structures emerged from a soup of chemicals.”

Although similar work has been done using actual particles—such as an experiment reported from New York University last year in which the properties of polymer-coated hematite crystals were explored—Glotzer’s group confined their activities to the virtual world of computer simulations. What would happen, they wondered, if crystals that start spinning in response to light were left to interact over time? 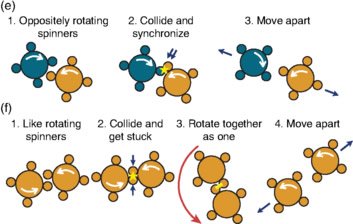 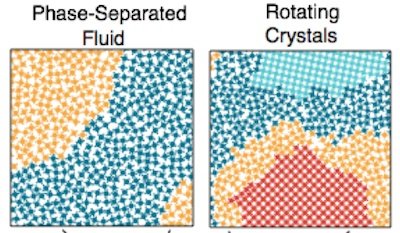 Computer simulated pinwheels spinning in opposite directions bounce off each other instantly when they bump. When pinwheels are spinning in the same direction, however, bumping blades push against each briefly and therefore stick together momentarily. As a result, spinners spinning in the same direction tend to cluster together in separate “phases,” as shown in the “Phase Separation” diagram. Eventually enough synchronization occurs to allow the clusters to rotate as a unit. Images: H. P. Nguyen et al., “Emergent Collective Phenomena in a Mixture of Hard Shapes through Active Rotation,” Physical Review Letters 112, no. 7, doi:10.1103/PhysRevLett.112.075701.

Simulating this scenario, Glotzer’s group found that spinning crystals eventually interact in ways that allows the energy of “blades” spinning in the same direction to transfer energy effectively between themselves, cluster together, and rotate as a unit. Individual spinning crystals bounce off each other differently depending on whether they are spinning in the same or in the opposite direction. (See the illustrations.)

Pinwheels spinning in the same direction momentarily lock their blades together as they push against each other. Blades of spinners moving in opposite directions never interact this way and instantly bounce apart. Their simulation shows that in time spinning nanoparticles could assemble themselves into something like “living rotating crystals” in which “the spinners organize into crystals that rotate collectively about their centers of mass”2 and “no longer rotate about their individual centers.”3

“If we can understand that, not only can we begin to imagine new ways to make materials and devices, but also we may begin to understand how the first living structures emerged from a soup of chemicals,” says Glotzer. “One way biology approaches the challenge of assembly is by constantly feeding building blocks with energy. So, that’s what we did with nanoparticles.” The simulation was conducted in only two dimensions, but the team suspects that a three-dimensional simulation would eventually produce an even more impressive “living” rotating crystal.

Last year New York University physicists Jérémie Palacci and Paul Chaikin reported that under the right conditions microscopic cubes of hematite partially covered by spherical polymer coats would defy the thermodynamics of random motion and repeatedly draw themselves together. To achieve this, the particles had to be placed in a bath of hydrogen peroxide exposed to blue light. The correct wavelength of light catalyzes a chemical reaction between the exposed bit of hematite and the peroxide, generating electricity that ultimately drew the particles together. Palacci said, “There is a blurry frontier between active and alive. That is exactly the kind of question that such works raise. . . . Here we show that with a simple, synthetic active system, we can reproduce some features of living systems. I do not think this makes our systems alive, but it stresses the fact that the limit between the two is somewhat arbitrary.”4

Life Is Not So Fuzzy

Students in biology classes soon learn that “life” in the biological sense is difficult to define, but not difficult to describe. They learn that living things consist of one or more cells and are inherently able to grow, move, reproduce, and use energy. They also learn living things only come from other living things; this is the law of biogenesis. It even sounds great in Latin! Omne vivum ex vivo. “All life from life.” First articulated by Louis Pasteur, the law of biogenesis describes what biologists always observe. Despite this succinct statement encapsulating the most fundamental principle of biological science, evolutionists assume that this natural law was once not true: that once upon a time, life created itself.

Experiments like these—in which inanimate particles assemble themselves into some sort of organized structure—explore the physical properties of inanimate matter. Technology benefits, or will benefit, as applications are discovered. Medical science may even benefit if drug delivery systems or cancer fighting agents are integrated with materials possessing these properties. But it is impossible for the science of discovering the origin of life to benefit without violating the laws of nature.

The Dream of Abiogenesis

Evolutionists seeking the “holy grail” of abiogenesis sometimes look to enzymatic molecules resembling the building blocks of DNA and RNA thinking to see how an information-carrying self-replicating code might produce itself. But showing that various molecules are capable of being used as a biological code does not solve the problem of where the genetic information in living things comes from. Some evolutionists search for the answer to the energy problem. Hence we’ve seen the idea that in the beginning chemical batteries provided the spark to get life started. Other evolutionists approach the problem from the organizational angle—looking for inanimate matter that by its nature captures energy and uses it to move or self-assemble into organized units. We’ve thus seen proposals that life evolved in a sudsy pond in which fatty acids formed membrane-like bubbles. But demonstrating how the physical properties of the chemicals and biomolecules in this world function in ways useful to living things in no way shows how those inanimate particles become alive.

These experiments with active matter fall under this latter category. Owing to their physical properties, these inanimate particles—whether imaginary ones in a computer simulation or carefully contrived ones designed in a laboratory—are able to convert energy to motion and then the random interactions that result can even lead to some sort of organized structure. But the resulting structure is no closer to being alive than the particles that formed it. Nor should we expect it to be, for that would violate the law of biogenesis—something that has simply never been observed.

The Origin of Life

Answers in Genesis molecular geneticist Dr. Georgia Purdom has observed, “The origin of life is very problematic to explain using naturalistic mechanisms.”5 As each suggested mechanism to deal with one of the barriers to naturalistic origins is investigated, Dr. Purdom notes, “What becomes obvious is that evolutionists are really exercising their imaginations rather than engaging in real research as they come up with their origin-of-life theories.”6

“Once again we see scientists claiming that matter plus energy equals the first steps towards life,” Dr. Purdom explains, commenting on this study. “But all the matter, energy, and ‘spinning crystals’ in the universe won’t cause life to come from non-life. Life requires information and thus, an information giver. The only one capable of creating and encoding this information is the Creator God.”

The wonders of nanotechnology, made more feasible through the physical properties of active matter, may revolutionize technology. But they will not enlighten our understanding of our origins. If we want to understand how the physical world and the living things in it operate today, scientific experiments and observations can show us. But the origin of living cells (and all other kinds of biological life) is a historical question that can only be correctly answered on the basis of the completely truthful testimony of the only eyewitness, the Creator.

God created all life and all biological principles governing it. If we want to understand the origin of life, we should look to its source, the living God who has always been alive (John 1:1–3), and trust His account of what He did about 6,000 years ago when He created “the heavens and the earth, the sea, and all that is in them” in just six days (Exodus 20:11).

Just as the living God is the only source that could have created physical life, so He is also the only source of spiritual and eternal life. The Bible tells us that God created man in His own image. Adam soon rebelled against God, and as a result (Genesis 2:17) Adam and Eve and all their descendants not only die physically but were born spiritually dead (Romans 3:23, 6:23, 5:12–17). The same God that made us alive physically in the first place graciously made a way for us to become spiritually alive, however, both now and for eternity, by trusting in the sacrificial death and resurrection of Jesus Christ God’s Son, who has provided the only way (John 14:6) to be reconciled with our Creator and to have abundant life forever.