Some locations on earth seem just too extreme to support life. One such extreme environment is vents at the bottom of the ocean that spew out superheated water and toxic chemicals. Yet even here we find an abundance of living things, well designed for life at the extreme.

An ugly gash slices across the earth’s surface, zigzagging 49,700 miles (80,000 km) around the globe. Superheated water gushes out of underwater fissures, spewing clouds of toxic chemicals. Temperatures can reach 700°F (400°C), and pressures can exceed 10,000 pounds per square inch. Surely this should be the most desolate spot on the planet.

Scientists first discovered hydrothermal (“hot water”) vents in the 1950s and 1960s when improved sonar equipment allowed them to map the ocean floor in rich detail. The vents appeared along mid-ocean ridges, wherever the earth’s plates were pulling apart.

When probes reached these murky depths in the 1970s, scientists were surprised to find a bustling community of bizarre creatures, including giant white crabs and odd worm-like creatures called tube worms. In fact, hydrothermal vents may support the most populous habitat on the planet.

Bacteria to the Rescue

Before these discoveries, the standard biological model assumed that life requires solar energy and can tolerate only a very narrow range of harsh conditions. Since no sunlight pierces the inky blackness of the ocean floor, scientists expected to find a wasteland. So how does life thrive at such extremes?

Bacteria are so thick they form a crust over the entire vent region. Upon closer inspection, scientists discovered that the bacteria run a special filtering system around the vents. On the one hand, they take toxic hydrogen sulfide out of the environment and basically turn it into food. The bacteria also grow on some of the creatures, creating a bacto-blanket that protects them from heat.

In addition to the special abilities of the bacteria, we are beginning to understand some of the specialized designs of each creature that help it flourish under these extremes.

More than 300 types of creatures have been discovered so far living at various vents, and 95% of them are previously unknown species. The registry includes naked snails that don’t even have shells because the shells would dissolve in this toxic environment. 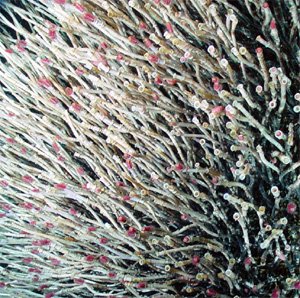 GIANT TUBE WORMS are designed to endure extremely high temperatures and sulfur levels. With no sunlight available as a form of energy, the tubeworms rely on bacteria to convert hydrogen sulfide into useable energy. Photo courtesy of NOAA

Perhaps most well-known of the vent creatures are the giant tube worms, which live together in large clusters. They resemble worms, except that they live in fleshy tubes and have no mouth, no stomach, and no intestines.

The giant tube worm, or Riftia pachyptila, which grows to nearly 8 feet (2.5 m) lives very close to the boiling-hot hydrothermal vent. Its designs for enduring such heat were so unusual that scientists originally gave it its own special classification or phylum. Each worm has a red head, or plume. The red color indicates a specialized chemical, similar to the hemoglobin in our blood, but this chemical transports hydrogen sulfide instead of oxygen.

The hydrogen sulfide is deposited in a cavity in the worm’s body, called the trophosome. This large, stomach-like space is filled with trillions of bacteria that eat the hydrogen sulfide. In return for the shelter, the bacteria provide food for the worm.

The worm has no mouth and no digestive system. This may not sound fun, but in fact this creature never gets indigestion and never needs to use the bathroom. It’s a very efficient system, with minimal “working parts” in a very dangerous environment. 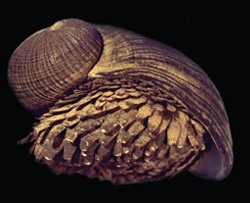 ARMORED SNAILS use iron scales and a triple-layered shell to withstand the heat of deep-sea vents. Photo courtesy of Dr. Anders Warén

Another type of worm also lives in a tube, but it wears a unique heat shield made of slimy bacterial “fur.” It may, in fact, be the most heat-tolerant animal on earth. Its head sticks out of its tube into waters as warm as 70°F (21°C), while its tail dangles in water up to 176°F (80° C).1 The fur on the body is actually colonies of bacteria that not only shield the worm from heat but also provide food. The worm secretes mucus that helps the bacteria form this fleecelike coat.

Any form of life is a wonder, no matter where we find it, even in the most pleasant places. Yet life is not rare. We’re finding it everywhere. Creationists should not be surprised that fully functional, amazingly designed life is abundant even in extreme environments. In fact, creationists should expect abundance because God commanded the oceans to “teem with life” and living things to “fill the earth.” 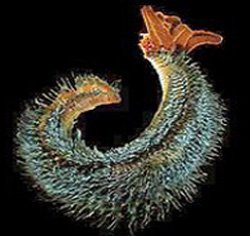 POMPEII WORMS may be the most heat-tolerant animals on earth. They are able to withstand the intense heat of hydrothermal vents thanks to a fleece-like coat of bacteria. Photo courtesy of Dr. Anders Warén

Hydrothermal vents are a powerful example of how the “living God,” the giver of life, left His fingerprint everywhere (see Romans 1:20). He made life so resilient that we find it glibly fulfilling His original command to fill the waters in the ocean even after the devastating catastrophe of the Flood, which broke up the “fountains of the deep” and resurfaced the face of the whole planet.

Benefit for All Life

The mid-ocean ridges are evidence of the catastrophic plate movements during the Flood. This massive scar—the largest geological structure on earth—is a sobering reminder of God’s judgment on past sin. Yet the fissures perform an invaluable service today, not just for living things on the seafloor but for life everywhere.

Hydrothermal vents form when ocean water seeps down into the cracks on the ocean floor where the large tectonic plates are separating. The water encounters hot rocks, causing it to shoot upward, geyser-like, spewing boiling-hot toxic chemicals into the surrounding ocean. The pressure at the greatest depths prevents the water from boiling and explains why temperatures can reach such extremes. As a consequence, lots of minerals get dissolved in this superheated water.

This water restores valuable chemicals in the world’s systems. In fact, fountains of different kinds have played an important role in the earth since creation (Revelation 14:7 says God made “heaven and earth, the sea and springs of water.”)

Living things are made of trillions of different kinds of atoms and molecules, and these must be constantly circulated. In fact there are more than 100 trillion atoms in one single cell in your cheek. Multiply 100 trillion by the number of cells in your body, and the resulting number is greater than the estimated number of stars in the universe.

Where do these atom-level chemistry pieces come from, and how do they transfer to you?

According to Genesis, they were initially taken from the earth and intricately arranged in living things by the Creator (Genesis 1:20, 24; 2:7). But all living things need a constant supply of these small building blocks, and many of these chemical elements are locked up in rocks or buried in the depths of the earth.

So how are they released from their earthly prison to find their way into snails, toads, trees, and us? The answer is “water.” Flowing water can break down rocks, and then microbes help distribute the nutrients to living organisms. Add some heat, and you have an even more efficient process for transporting the chemical nutrients that living things need. This is most dramatically illustrated in hydrothermal vents.

We can’t be absolutely certain, but it appears that hydrothermal vents could have been part of a system to distribute carbon and other minerals even before the Flood. It is possible to supply nutrients by other means, but hot fluids are very efficient suppliers. And even though we think of these chemicals as toxic, it is clear that many animals have designs enabling them to make vents their home.

So the mid-ocean ridges are not just reminders of judgment. They remind us that God promises life from death. After the Flood, He promised never again to destroy the earth by water, and through Christ He promises abundant life to anyone who trusts Him. Though a person is dead in sin, He can become a “fountain of water springing up into everlasting life” (John 4:14).