on November 16, 2015
Featured in Thinking Outside the Box
Share:
Email Using:
Gmail Yahoo! Outlook Other

Noah and his family members must have worked very hard to care for the animals during their year-long stay on the Ark. But no matter how many long hours they put in, they must have had some downtime to relax and recuperate. Have you ever wondered what they might have done during these times?

Since the Bible tells us very little about what happened on board the Ark during the Flood, we can attempt to make educated guesses based on what the Bible reveals about the individuals and their world. For example, based on Genesis 4:21, we know that they could have had access to musical instruments. Perhaps one or more of the family members spent some time playing music. 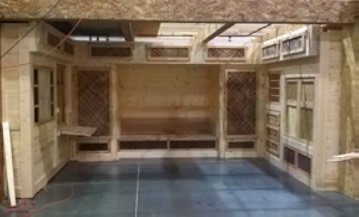 An unfinished mock-up of one of the bedrooms to be displayed in the Ark.

It is likely that one or more of the Ark’s passengers was adept at working with wood. Thus, it is not a stretch to think that someone may have spent time building wooden items, such as furniture or crafts. Maybe one of them enjoyed painting and another liked making fabrics and clothing. Did they play games together, tell stories, or talk about what the world might be like after the Flood?

As a righteous man, Noah would have wanted his family to worship and serve the Lord. Perhaps they set aside regular times to worship the Creator who had spared their family from the global Flood.

At the Ark Encounter, we have been considering the family’s downtime while on the Ark, for we plan to depict each of the family members in various settings. On the third deck, guests will have an opportunity to visit the living quarters of Mr. and Mrs. Noah, as well as for their three sons and daughters-in-law. Each couple will have their own room designed to feature items that highlight their possible various hobbies and interests.