on December 28, 2015
Featured in Thinking Outside the Box
Share:
Email Using:
Gmail Yahoo! Outlook Other

In thinking through and designing the many striking exhibits for the Ark Encounter, AiG researchers and designers have to think about a variety of means by which the message can be delivered. Each exhibit needs to have a unique look and feel, while seamlessly blending teaching content in a highly entertaining way with video, sculptures, art, and interactive displays.

Dioramas can bring biblical accounts to “life” in a powerful way, so the Ark will feature several highly detailed dioramas (currently in various stages of development). Modern technology has allowed us to produce these scenes much faster than ever before. 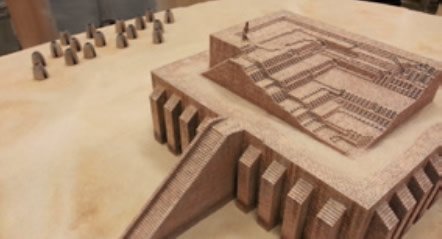 The Babel diorama currently being constructed will eventually feature 1,000 people, 400 animals, and much more.

The stunning Tower of Babel diorama will show the tower under construction along with the surrounding city. About 1,000 miniature people and 400 animals were 3D printed and then carefully painted by staff artist Greg Iocco. These figures will be part of the bustling construction project to be depicted, complete with reed and brick homes and ovens for baking bricks.

Our Ice Age exhibit will be home to a diorama that is without equal! Visitors will see how logical a “rapid ice age” model is in explaining Earth’s history. For instance, it demonstrates how true, observational science regarding the formation of snow and ice layers strongly supports the biblical timeline of a recent creation, rather than evolutionary long-age thinking.

The Pre-Flood World exhibit will feature three large dioramas, each focusing on a different aspect of the pre-Flood society. Visitors of all ages will be able to get a carefully presented taste of what that wicked world may have been like.

Recently, our designers even figured out how to utilize video game technology to customize the dioramas to a greater degree and produce more realistic-looking figures. We can now capture a 3D scan of a real person! This computerized scan can be touched up, resized, and then sent to the 3D printer to be built.

It is truly exciting to see the exhibits coming together in time for the opening of the Ark Encounter this coming July 7.

Previous Article Downtime on Noah’s Ark Next Article What Was the Pre-Flood Population Like?