New methodology may help combat what some consider a modern evolutionary nightmare.

Antibiotic-resistant “nightmare bacteria,” experts agree, “pose a catastrophic threat”1 worldwide. The Centers for Disease Control has just issued its 2013 analysis of the escalating morbidity and mortality due to antibiotic resistance.2 To no one’s surprise, the problem is rapidly getting worse. CDC data show that at least 2 million people in the United States alone get infected with antibiotic resistant bacteria yearly. At least 23,000 die as a direct result, and many more die from conditions complicated by antibiotic-resistant infections. And while most deaths occur due to infections acquired in health-care facilities, overuse of the antibiotics has led to the development of reservoirs of resistant bacteria throughout the population and the environment.3

The CDC analysis confirms that overuse of antibiotics is the primary reason that resistant bacterial populations are emerging so rapidly. “It is not too late,” warned CDC director Dr. Tom Frieden during a press conference. “If we’re not careful, the medicine chest will be empty when we go there to look for a lifesaving antibiotic for someone with a deadly infection. If we act now, we can preserve these medications while we continue to work on lifesaving medications.” The detailed report includes germ-specific treatment guidelines for outpatient care as well as for hospitalized and nursing facility patients. 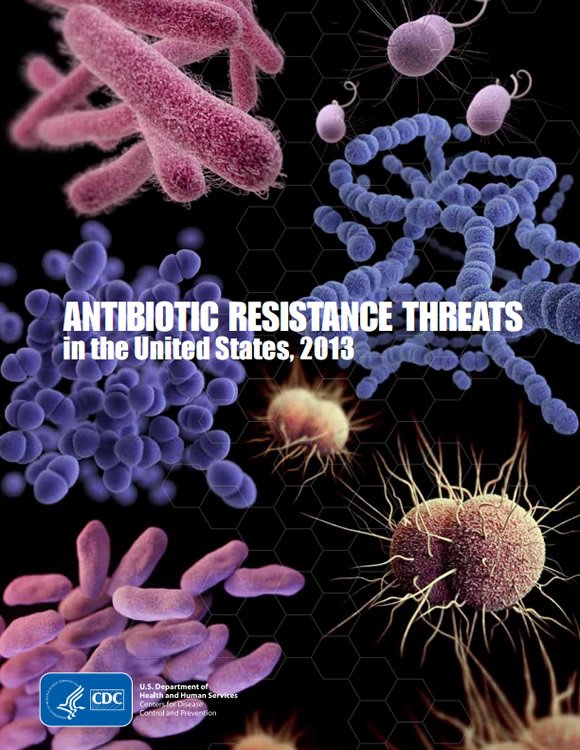 The CDC report indicates that programs promoting a more judicious use of antibiotics in institutional settings combined with simple measures promoting hand-washing and minimizing the duration of intravenous lines and catheters have been proven to reduce the incidence of resistant infections.5 Nevertheless, recent history has shown that some pathogenic populations can even emerge with resistance to standard decontamination. An outbreak of Klebsiella pneumonia at the U.S. National Institutes of Health Clinical Center in 2011 managed to spread in spite of strict decontamination and infection control procedures.

“Every time antibiotics are used in any setting, bacteria evolve by developing resistance. This process can happen with alarming speed,” warns Dr. Steve Solomon, director of CDC’s Office of Antimicrobial Resistance. And while it appears overuse of antibiotics in health-care facilities is the greatest culprit causing resistant bacterial populations to emerge, excessive use of antibiotics in the food industry is also worrisome because, Bell says, “there is always going to be bleedover in the environment and the ecosystem.”

On a hopeful note, new research from the University of California, San Diego, reported in the Proceedings of the National Academy of Sciences promises a way to develop effective drugs for the arsenal to battle resistant bugs more quickly. Biologist Joseph Pogliano, who led the research team, hopes the new technology will help researchers develop new drugs faster by quickly determining just exactly how anti-microbial molecules work. 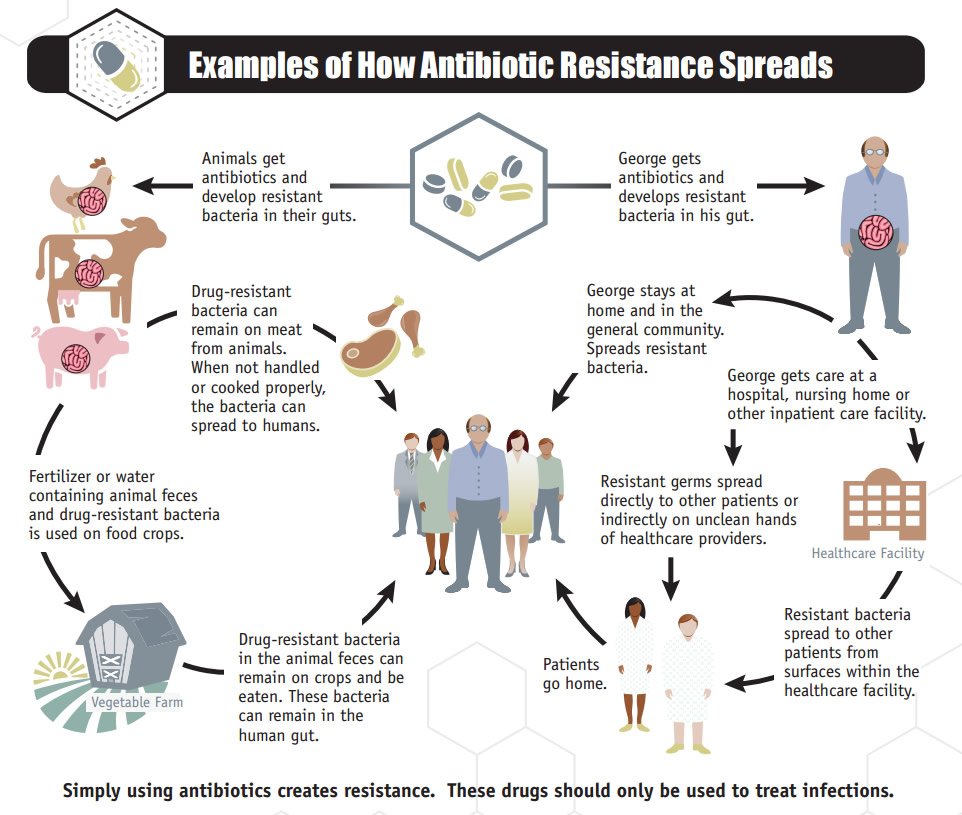 When penicillin was discovered in the 1920s, no one knew its mechanism of action. And while our knowledge of how drugs attack bacteria has increased greatly, the precise molecular targets vulnerable to various antimicrobials is actually difficult to determine. The methodology for testing potentially useful antibiotics is fairly inefficient and in most cases “cannot distinguish between inhibitors that affect different steps of the same pathway.”7

Efficiently identifying the part of a cellular pathway targeted by a given antimicrobial should help develop drugs faster by showing not only which ones will probably work but also exactly how some bacteria in a given population resist certain antimicrobials, allowing them to multiply into whole resistant populations.

This will provide a powerful new tool for identifying compounds that kill bacteria and determining how they work. Some bacteria have evolved resistance to every known class of antibiotic and, when these multi-drug resistant bacteria cause an infection, they are nearly impossible to treat. There is an urgent need for new antibiotics capable of treating infections caused by antibiotic resistant bacteria.

Our new method represents the first time that a single test can be performed and identify the likely mechanism of action for a new compound. This method will allow us to more quickly identify chemicals that kill bacteria, which will accelerate the development of new medicines. Understanding how antibiotics work is key to understanding how they evolve resistance.

It’s easy to identify thousands of molecules capable of killing bacteria. The hard part is picking out the winners from the losers, and choosing molecules that are the best candidates for drug development. One key piece of information needed for this choice is knowledge of how the drug works, but this is traditionally difficult information to obtain, usually requiring months of intensive work. We’ve applied 21st century methods that within just two hours provide this information, allowing more rapid prioritization of new molecules. This will open up the discovery pipeline, allowing us to more rapidly identify new molecules with potential to enter the clinic for treatment of multi-drug-resistant pathogens.

The new technology—bacterial cytologic profiling (BCP)—involves examining bacteria using a battery of automated microscopic techniques to see what subtle changes in bacterial morphology result from exposure to various molecules that are toxic to bacteria.

“Why does BCP work?” the researchers write. “A bacterial cell is built by thousands of enzymes working in unison. We speculate that the various pathways are largely uncoupled by checkpoints so inactivating a single essential enzyme reduces one key product, while the rest of the cell continues to replicate, leading to unique cell-shape changes in response to each specific challenge.”8

Unlike methods currently in use, the test is rapid and promises to be fairly accurate. While it unfortunately can only identify the morphological result of an antimicrobial attack and “does not identify the precise molecular target”9 it should serve as an efficient tool to screen possible antibiotics for their likely usefulness against dangerously resistant pathogens.

Clearly the path to victory against resistant bacteria must be a two-pronged approach involving not only far more judicious use of antibiotics but also more efficient methods of determining the precise molecular mechanisms at work when antimicrobial agents attack bacteria and when bacteria fail to succumb to our best efforts.

As shown in this chart provided by the Centers for Disease Control, antibiotic resistance does not develop through the evolution of new kinds of organisms; rather it is through the selective survival of microbes that already possess the “work-around” that enables them to survive assault by antibiotics to which they are exposed. This process illustrates natural selection, not molecules-to-man type evolution. Image from Centers for Disease Control.10

But what does evolution have to do with antibiotic resistance? The “e-word” gets thrown around quite a bit, often applied to everything from ordinary speciation happening before our very eyes to unobservable speculations about molecules-to-man evolution and the supposed emergence of humanity from ape-like ancestors. Antibiotic resistance is often held up as the “poster-child” proving evolution-in-action.

In truth, however, the very first “antibiotics” were natural substances—such as the penicillin produced by bread mold. Microbial communities exposed to molecules secreted by their neighbors—often other microbes—only survive because some of the microbes being attacked are already equipped with the genetic information enabling them to circumvent the attack. Resistant survivors become the basis for the continuing population, but the resistant survivors are not new, more complex kinds of organisms. They are only resistant varieties of the same kinds of bacteria.

How did the resistant varieties in the population get to be resistant? Answers in Genesis molecular geneticist Dr. Georgia Purdom explains:

An antibiotic kills a bacterial cell by simply disrupting a critical function.11

Mutant bacteria, for instance, may have a mutation in some small aspect of a critical protein. Such a mutation may allow the protein to function but render it unrecognizable to the antibiotic—whether a natural substance or a synthetic molecule—being used to attack it. Thus, as Dr. Purdom explains:

In short, antibiotics kill susceptible organisms, while the resistant ones survive and reproduce. The resistant microbes simply get selected for survival when their neighbors succumb, and then the survivors reproduce and thrive.

Despite the repeated use of the word evolution, nothing in the PNAS study or the CDC report demonstrates bacteria can evolve into something new. As we’ve said many times before, antibiotic resistance is natural selection in action, not evolution in action.

So where did all the genetic information in microbes come from in the first place? It came from our Creator when He created a perfectly good world (Genesis 1:31) about 6,000 years ago. Much has gone wrong in this sin-cursed world since then, yet even now most bacteria are still harmless and even helpful.

God created microbes for important functions, and the majority are still harmless. The existence of biochemical means to keep bacterial populations in check as well as the genetic information to enable microbes to resist such “natural antibiotics” likely provided a balance in the pre-Fall world. Changing conditions in the post-Fall world have allowed helpful bacteria to become dangerous. A combination of mutations, horizontally transferred genes, environmental changes, and host changes can transform harmless microorganisms into pathogens. From an evolutionary point of view, killing the host is a particularly bad idea! But a biblical understanding of a good world gone wrong is consistent with the antibiotic resistance and bacterial pathogenicity we see in the world.

The battle against resistant bacteria is surely a battle against a nightmare at times, but not against an evolutionary one. Finding precise molecular targets at which various molecules attack pathogenic bacteria does not unveil evolution in action but just the ordinary, and unfortunately in this case very efficient, process of natural selection.