Did Triassic dinosaurs wake up and smell the roses?

Flower evolution has long been assigned to the Early Cretaceous period. New discoveries, however, have found that the roots of floral origins and diversity reach down into the Middle Triassic, dated at about 243 million years. Evolutionary paleobotanists Peter Hochuli and Susanne Feist-Burkhardt now suspect that flowers were blooming in their diversity by the time dinosaurs evolved, more than 100 million years earlier than previously thought.

Pollen out of Place

Flowers are too fragile to be reliably and widely preserved as fossils. Therefore, the place of flowers in the fossil record is best marked by pollen. “The earliest accepted records are essentially based on dispersed pollen grains, which due to their high numbers and their high preservation potential represent the most appropriate tool to trace the timing of early angiosperm evolution,”1 Hochuli writes. Flower-associated pollen can be distinguished from the pollen of non-flowering seed producers, like conifers. Such fossil evidence of flowers appears in the Early Cretaceous and all strata above that.

Hochuli and Feist-Burkhardt have discovered six different types of floral pollen in two drilling cores from northern Switzerland’s Middle Triassic strata. They obtained detailed three-dimensional images of the pollen grains using confocal laser microscopy and confirmed the grains met all criteria for flower pollen. The characteristics suggest it was suitable for pollination by insects. However, because evolutionists believe bees didn’t evolve until the Early Cretaceous, they speculate that beetles did the pollinating. 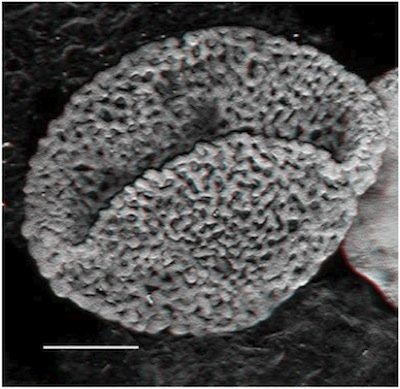 This tiny grain of pollen is one of six different types of flower pollen recovered from Triassic rock samples. Because evolutionists believe the Triassic rock was deposited about 243 million years ago, they now believe flowers evolved more than 100 million years earlier than they previously thought. Scale bar=10 micrometers. Image by Peter Hochuli and Susanne Feist-Burkhardt, via Guardian Liberty Voice.2

Previously, in 2004, Hochuli and Feist-Burkhardt found Middle Triassic pollen in marine sediment from the Barents Sea, 3,000 kilometers to the north. A Chinese team led by Xin Wang has also reported a floral fossil from the Early Jurassic. Those discoveries plus the presence of diverse types of pollen in these samples suggest, the researchers believe, that floral diversity had already evolved by the time the dinosaurs made their appearance. Hochuli says, “We believe that even highly cautious scientists will now be convinced that flowering plants evolved long before the Cretaceous.”

Evolutionists have long been puzzled about how flowers could diversify to fill the earth so rapidly after they evolved. From their Early Cretaceous appearance 130–140 million years ago, evolutionary interpretation of the fossil record concludes they rapidly diversified to dominate the botanical world by 90 million years ago. Furthermore, though generally thought to have evolved from extinct gymnosperms (plants like conifers with “naked” unenclosed seeds), neither the fossil record nor molecular clock dating has provided any consensus about the “hows” and “whens” of floral evolutionary ancestry.

Writing in Frontiers in Plant Science, the researchers report that molecular clock predictions about the timing of floral evolution vary greatly. Estimates point to origins much earlier (275 mya) than the “new” pollen-based time, much later (147 mya), and many possibilities in between.3 Molecular clock dating is ordinarily calibrated in accordance with the fossil record—a source of much circular reasoning, incidentally—but the scarcity of floral fossils has rendered clocking flowers a difficult proposition. 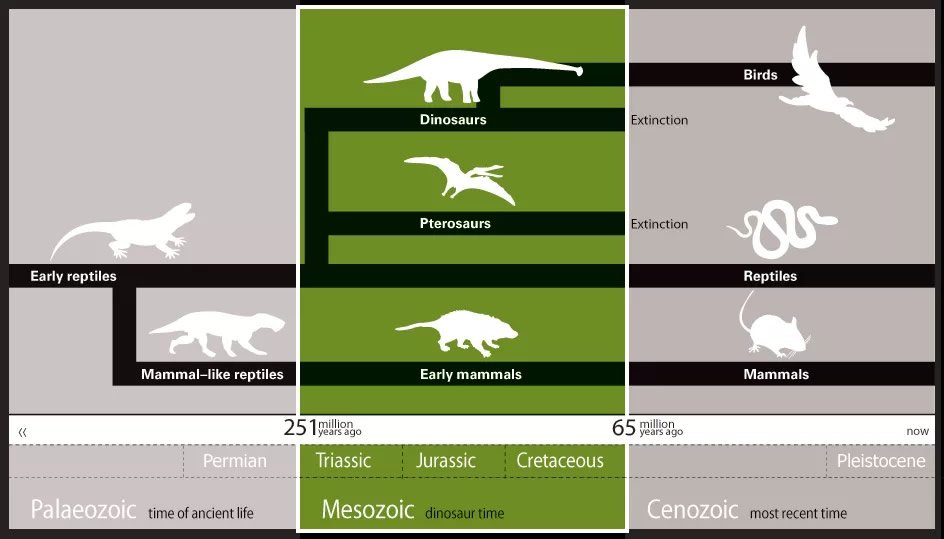 The “abominable mystery” is actually only a mystery for those espoused to evolutionary presuppositions. Evidence of floral diversity deep in the fossil record is no surprise when the fossil record is viewed not as a timeline of evolving life-forms but the order of catastrophic burial of many organisms, largely associated with the global Flood less than 4,500 years ago. The billions of dead things preserved in the fossil record were for the most part buried as various habitats were overwhelmed by violent rising Floodwaters.

The “abominable mystery” is actually only a mystery for those espoused to evolutionary presuppositions.

While we cannot know the pre-Flood earth’s geography, the order and diversity in the fossil record suggest that certain types of ecosystems—perhaps more low-lying ones—were destroyed and buried before others. This is a reasonable and biblically consistent explanation of why the majority of floral fossils appear in higher strata, just as it explains the preponderance of marine invertebrates in lower layers and the distribution of vertebrates in the higher ones.

The discovery of Triassic floral pollen is thus consistent with the biblical historical record that informs us God created all kinds of plants on the 3rd day of Creation week, about 6,000 years ago. All kinds of plants, flowering and otherwise, were created able to reproduce (Genesis 1:11–13; Exodus 20:11) and able to vary within their created kinds. Flowers did not have to evolve or to co-evolve with pollinating insects as evolutionists generally assert, as pollinating animals were created the same week. Diverse Triassic pollen is quite consistent with the presence of functioning flowers on earth from its very first week.