Bees Bond on the Right

Why do bees use the right antenna of fellowship?

Honeybees identify their hive mates by “smelling” them with the antennae. To determine whether bees depend more on one antenna more than the other, Vallortigara’s group captured honeybees from two hives. They snipped off each bee’s right or left antenna. Then they observed pairs of bees in a petri dish, seeing how long they took to approach each other. Bees ordinarily stick out their tubular “tongue” (proboscis) when offered a sugary solution. Therefore, the researchers judged “proboscis extension” as roughly analogous to a friendly handshake. Bees that brandished a stinger or opened the jaws as if to bite were judged unfriendly.

Pairs from the same colony quickly greeted each other if they still had their right antennae. However, if they only had left antennae, they seemed to not recognize their “friends.”

The right antenna was also important for “enemy” recognition. Pairs from different hives were appropriately unfriendly only if they had their right antennae intact. The investigators therefore believe the right antenna is important for consistent “context-appropriate” social behavior. They write, “Although use of the LA [left antenna] does not cause bees [from different hives] to completely avoid each other, social behaviour performed is not context-appropriate, possibly due to an inability to distinguish between hive mates and bees from another hive.”1 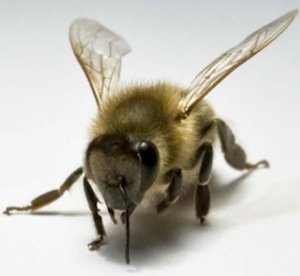 This honeybee, having lost its right antenna, cannot consistently recognize its hive mates or its foes. Image by Elisa Rigosi/University of Trento, via Nature.2

More people are right-handed than left-handed, but handshaking customs—which, though varied, span many cultures and centuries—are more typically performed with the right hand.3 Does this social convention just show that the right hand carries no weapon, or is there a deeper biological basis for the “right hand of fellowship” (Galatians 2:9)?

Lateralization refers to a right- or left-sided bias in behavior. A common example is the “handedness” of people. Lateralization also refers to the dominant localization of a function on one side of the brain. For instance, the language centers in most people’s brains are on the left. Scientists once thought lateralization, like language, was a purely human attribute. In the past two decades, scientists have found that lateralized functions are common throughout the animal world. For instance, toads, chicken, and mosquitofish “react faster to predators approaching from the left.”4

Thus, while language is a uniquely human ability, both the lateralization of behavior and the lateralization of brain function are common design features, not at all limited to humans. “Until quite recently, neuroscientists believed that brain asymmetry and lateralization of function [meaning the left and right sides of the body are better at different things] was a uniquely human phenomenon, associated with language and higher mental functions,”5 Vallortigara says, but this “asymmetry of function”6 has now been found in many mammals, reptiles, fish, and even invertebrates, like bees.

Most lateralized traits are not equally distributed across a population. Among humans, for example, there are more “righties” than “lefties.” And about 95% of humans have their brain’s language centers in the left hemisphere. “Indeed, in most species where a lateral bias is present for a behaviour, left- and right-biased individuals are not equally common, with the minority type making up from 10% to 35% of the population.”7

The biological basis for brain and behavioral lateralization is not well understood. Neither is its consistent propensity to be unevenly distributed across populations. Because righties and lefties, for any given behavior, typically perform equally well, evolutionists have been hard-pressed to explain the asymmetrical prevalence of lateralized traits. If there is no selective advantage to being right-handed, for instance, why have righties greatly outnumbered lefties by a consistent percentage since people started keeping historical records of such things?8

There must be some advantage since it is fairly common, evolutionists reason, but from an evolutionary point of view, neither lateralization nor its asymmetrical distribution makes sense. Vallortigara suspects that lateralization may offer some selective advantage to humans and to animals as they interact with each other.

“Asymmetry of the brain [lateralization] seems to be a general characteristic of the animal nervous systems, even of those with less than a million neurons, like honeybees,” Vallortigara says. He suspects that “interactions between asymmetrical individuals” have been the driving force behind the development of a particular directional bias (like right-handedness) in many species.

Vallortigara’s work has shown that lateralization is not only important for social interaction in bees but also may serve a cognitive purpose. His previous work with chickens has shown that lateralization of visual function can be induced by exposing eggs to directed light for three days before hatching. Chicks “educated-in-the-egg” actually perform better in visual tests like picking out grain from a bed of pebbles and tracking flying predators.9 In humans and in many animals, Vallortigara suspects “the different specialization of the left and right side of the brain may increase brain efficiency.”10 Yet the biological basis for lateralization remains elusive.

This conclusion is based not on any sort of biological facts but merely on the worldview-based assumption that living things share a common evolutionary origin.

The “direction of bias for a given function . . . is often consistent across taxa (fishes, amphibians, reptiles, birds and mammals).”11 For instance, Vallortigara indicates the brain’s left hemisphere is typically occupied with routine choices, while the right is often specialized for rapid response to unusual situations and “spatial functions.”12 This, Vallortigara believes, suggests “an ancient (very likely homologous) origin in early vertebrates.”13 Yet this conclusion is based not on any sort of biological facts but merely on the worldview-based assumption that living things share a common evolutionary origin.

The mysteries of the advantages lateralization offers as well as the anatomical, behavioral, and genetic basis for it have yet to be worked out in humans and in animals. Much remains to be learned about this aspect of the brain and behavior. The solution to these mysteries will not benefit from evolutionary speculation but from continued experimental science. Whatever advantages lateralization offers and whatever functions it serves, cross-species similarities are consistent with creation by a common Designer and require no evolutionary explanations.