From Bacteria to Giraffes: Adapting Reality to Fantasy

What can pink shower scum tell us about the origin of the giraffe’s long neck?

It may sometimes seem like the nasty pink shower scum that keeps coming back will take on a new life of its own. Harvard evolutionary biologist Christopher Marx has been trying to see what the pink monster’s genetic tricks can reveal about our supposed trip up the evolutionary tree of life.

“Did a giraffe’s neck get longer because there were thousands of mutations each resulting in a millimeter increase?” Marx wonders. “Or were there three or four changes over time that changed the size of the vertebrae dramatically?” Marx and his students study the bacteria Methylobacterium extorquens in hopes of answering this sort of question.

Methylobacterium is a kind of bacteria that grows on leaves. “It's also the main cause of that pink scum in your shower,” says Marx. Methylobacterium ingests methanol and excretes formaldehyde. Marx’s team used genetically engineered Methylobacterium in which this metabolic pathway had been sabotaged.1 Then they observed how the resulting populations coped. Essentially, they “handicapped” the bacteria in order to force them “to evolve.” They studied the kinds of mutations that appeared in the “multiple evolved lineages” that resulted and measured their growth rates.2

Seventeen distinctly different mutations appeared in response to this stress. These mutations decreased the impact of the metabolic handicap on bacterial fitness in various ways. In no case, however, did any mutation go on to dominate a bacterial population. “Despite conferring a large selective benefit,” the researchers write, “the majority of these alleles [different versions of genes] rose and then fell in frequency due to other lineages emerging that were more fit.”3 This competition, called clonal interference, kept any one mutant population from taking over. 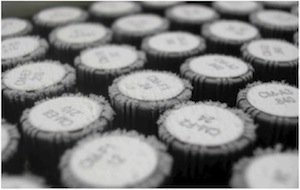 Vials of bacteria, genetically engineered to have a metabolic problem, were used to see how bacterial mutations may help them overcome the stress imposed on them. All the mutations that developed involved the use or suppression of existing genetic information, not the generation of new genetic information. Image by Christopher J. Marx/Harvard University, via Phys.Org.4

The competition produced when too many “good” mutations appear simultaneously, Marx concludes, apparently diminishes the advantage they can offer to the bacteria. If such mutations were rare, as has been previously assumed, they might provide a persistent selective advantage and last. “One consequence of the rarity of beneficial mutations would be that any improvement that arose would have a chance to take over before another beneficial mutation would arise, and would thus proceed unchallenged,” Marx explains. “This would lead to a series of rare, step-like jumps in performance. It would also mean that the mutations that won—rising to 100 percent of the population—would give a fairly clear picture of what is biologically possible for that organism.”

Research has failed to demonstrate that evolution of new kinds of organisms is biologically possible.

Bacteria—because they are unicellular, have only one copy of their chromosomal material, and reproduce asexually—are more likely than multicellular organisms (like people) to reveal the observable characteristics—the phenotypic effects—caused by mutations. Yet even in bacteria, beneficial mutations have generally been considered to be a fairly rare occurrence. In recent years, however, researchers have learned that mutations beneficial to bacteria exposed to stressful environments may be fairly common. Molecular geneticist Dr. Georgia Purdom and microbiologist Dr. Kevin Anderson explain,

In bacteria, a wide range of mutations can be shown to provide a beneficial phenotype to the cell. These benefits are often of sufficient phenotypic effect that they can undergo strong positive selection. But the benefits are generally temporary and limited. . . .

Bacteria also can undergo adaptive mutation; a phenomenon used by bacteria to survive very specific stressful conditions. The exact mechanism is controversial because some results suggest a directed mutation specifically enabling adaptation to the environment but at a mutation rate higher than random mutations would produce.5

Environmental conditions associated with such bacterial adaptations make those particular adaptive mutations beneficial. Because bacteria rapidly produce large populations of clones, they are easy to study. And because “bacteria have numerous mechanisms for introducing genetic variation”6 into their populations, “bacteria have become a popular system for studying mutations and alleged evolutionary transformations.”7 However, as Drs. Purdom and Anderson explain, “these [adaptive] mutations do not provide a genetic mechanism that accounts for the origin of biological systems or functions.”8 Adaptive mutations cannot explain the origin of life.

The mutations favored by natural selection in the populations of Methylobacterium tested are those that improve the metabolic efficiency of the genetically engineered “handicapped” bacteria. But all of the Methylobacterium remain Methylobacterium. None of the Methylobacterium become non-bacteria, or even another kind bacteria. Adaptive mutations of various sorts may help bacteria survive in adverse conditions and beneficial mutations do occur, as discussed thoroughly in “A Creationist Perspective of Beneficial Mutations in Bacteria,” but they are not evidence for molecules-to-man evolution. In no case does the beneficial mutation represent an acquisition of the information needed to become a new kind of organism.

So why would this be important in a practical sense? “The recent use of sequencing to discover cancer variants within a polyp, for example, has re-discovered what researchers in the lab had already shown,” Marx explains. Many mutations beneficial to the cancer cells tend to emerge simultaneously, rather than sequentially. “It turns out that beneficial mutations become less valuable [to the cancer cells or to the bacteria] when combined with each other.” Thus, Marx’s research and other work like it, such as similar discoveries in the laboratory of University of Houston’s Tim Cooper about the behavior of E. coli, may ultimately offer clues to the best treatment approaches for severe infections and even cancer.

All the information researchers have learned about these bacteria is actually consistent with the creation science model. As Drs. Purdom and Anderson summarize,

Beneficial mutations of bacteria fit concisely within a creation model where (a) biological systems and functions were fully formed at creation, (b) subsequent mutations can provide conditional benefits that enable the organism to survive harsh post-Fall conditions even though the mutation is generally degenerative, and (c) most bacteria need the ability to rapidly adapt to ever changing environments and food sources.9

Researchers will learn nothing about the origin of the giraffe’s long necks from pink shower scum. Biblical history informs us that God created all kinds of land animals on the 6th day of Creation week about 6,000 years ago. There is neither biblical nor scientific support for microbe-to-giraffe evolution.