Which Came First—Teeth or Scales?

Tooth enamel is the hardest substance in your body. But enamel also protects the scales of some fish. In fact, regardless of shape, the scales of many fish both living and extinct have a tooth-like bony core and a covering of hard enamel or enamel-like material.

For Bible-believers who accept God’s Word that He created all kinds of living things in the space of a couple of days about 6,000 years ago, this is not exactly a bulletin. After all, why wouldn’t a wise Creator use a good design, like enamel, to provide a hard protective covering in more than one place? But among those who reject God’s Word and substitute a naturalistic scenario to explain the origin of all things, this chicken-and-egg question has long been debated. Did teeth evolve from scales? Or scales from teeth?

Since evolutionists think fish are the ancestors of all terrestrial vertebrates, the question for them is not whether our smile has a fishy origin but rather which fishy part first acquired armor. Because the idea that God created teeth, scales, and enamel at the same time is not an acceptable answer to them, they claim each enameled fish fossil clarifies the confusion.

What some suggest could be the first true teeth were recently found in a fish called Romundina. One species of Romundina, dated at 410 million years, had teeth and scales both protected by an enamel-like covering. (“How Did We Get Our Teeth?” describes this fish’s unusual palate of teeth and how they grew.) Evolutionists had already given this placoderm credit for our faces (“Fish Brains Grew Till We Have Faces, Evolutionists Say”), so the discovery of Romundina’s enamel-reinforced teeth gave it additional credit for our durable smiles.

Now researchers report two ray-finned fish, equally deep in the fossil record, with enamel-coated scales but enamel-less teeth. These discoveries should put the final nail in the coffin for the notion that enamel-covered teeth evolved first and that scales subsequently evolved from them. According to Uppsala University’s Per Ahlberg, who led the research team, “This is important because it is unexpected.”1

“In us, enamel is only found on teeth, and it is very important for their function, so it is natural to assume that it evolved there,” explains Ahlberg. “As the wolf in ‘Little Red Riding Hood’ said: ‘All the better to eat you up with!’”2

The notion that enamel evolved from the “inside-out”—first on teeth, then on scales—was originally supported by tiny teeth scattered throughout the fossil record. These teeth belonged to jawless eel-like fish called conodonts. However, the discovery that some conodont teeth lacked enamel opened the door for an alternative “outside-in” view—the idea that hard enamel-coated scales evolved first and then migrated into the mouth, changed shape dramatically, and turned into teeth.

Clues Past and Present

Ahlberg’s group sought the solution to this chicken-or-egg mystery in evidence from the past and the present. On the one hand, they examined fossils of extinct bony fish, Andreolepis and Psarolepsis, dated 425 and 418 million years ago, respectively. While fragmentary fish fossils have previously demonstrated the existence of ancient fish scales covered with enamel-like material, in Ahlberg’s study there is no question that the enamel-covered scales and the teeth of naked dentin are clearly from the same fish. Therefore, Ahlberg’s team is confident, since their fish lacked them, that enamel-covered teeth were a late addition in the evolutionary history of vertebrates. 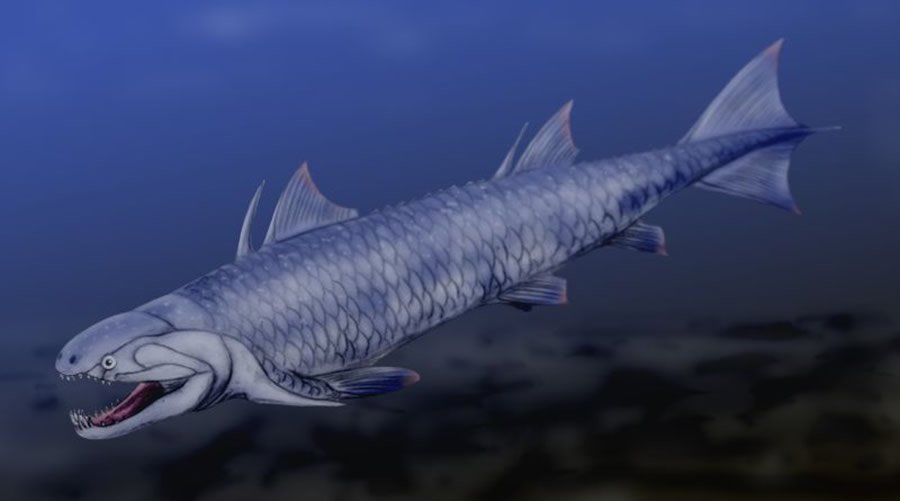 This digital image shows what the extinct fish Psarolepis romeri probably looked like. An enamel-like material called ganoine protected its scales and its facial bones, but not its teeth. Image credit Nobu Tamura, via Wikimedia Commons.

Extrapolating from the actual observable facts about these fish fossils—where they did and did not have enamel-like protection—to worldview-based beliefs about their evolutionary significance, Ahlberg says, “Psarolepis and Andreolepis are among the earliest bony fishes, so we believe that their lack of tooth enamel is primitive and not a specialization. It seems that enamel originated in the skin, where we call it ganoine, and only colonized the teeth at a later point.”3

Teeth and bones are hard because they contain a lot of minerals. (These minerals are called “hydroxyapatites.”) The exact composition of tooth enamel and the dentin beneath differ. Enamel is therefore harder but more brittle while dentin is flexible enough to absorb a lot of force without fracturing. The hydroxyapatite minerals in bone are arranged in yet another way, embedded in bone’s highly organized connective tissue. This design, described in “Bones: God’s Living Girders,” gives bone the strength to protect internal organs like the brain and to support the body’s weight.

Enamel is the most heavily mineralized material in your body. The minerals that make enamel hard cover the dentin core of your teeth before they erupt from your gums. Enamel is built from minerals deposited on a scaffold of several “enamel matrix proteins” (EMPs, for short). (See “Genetic Roots of Tooth Enamel Reveal Distinctive Design” to see how this works.) Once enamel matures, the cells that produce these proteins disappear; therefore, worn or decayed enamel cannot be replaced. Enamel is meant to last, protecting your teeth from a lifetime of grinding and chewing.

“Although this tissue [enamel] on our teeth is used for biting or shearing, it was originally used as a protective tissue such as in living primitive fishes including gars and bichirs,” explains the study’s lead author Qingming Qu.4 The gar is considered primitive because it shares anatomical features with many extinct fish.

The gar has the same kind of scales—ganoid scales—found on many fossilized fish, including the ones in this study. Gar scales, like our teeth, have a core of dentine protected by the enamel-like material ganoine. To support the connection between fossils armored with ganoid scales and modern-day enamel, the team looked to the present: to the gar’s teeth and scales and the genes that build their mineralized ganoid coat.

Ganoine is made of minerals and proteins similar to those in our enamel. Ahlberg’s team confirmed that living gar have genes corresponding to some, but not all, enamel matrix proteins (EMPs).5 These genes are expressed in the gar’s skin. While this confirms the similarity of ganoine and enamel, the team believes their evidence shows that ganoine is an earlier evolutionary version of enamel.

The team’s additional findings, however, led them to doubt the popular idea that enamel-covered scales migrated to the mouth and over millions of years put down roots there and evolved sharp new shapes. Enamel, they found, was not just for teeth and scales. Though its teeth had no enamel at all, Psarolepsis’s facial bones were protected by it. Given patchy distribution of enamel, they suggest that only the ability to make enamel migrated, not the enamel-covered scales themselves. They propose that the ability to produce enamel evolved and was progressively applied to a variety of structures—scales, facial bones, and teeth—as needed over millions of years.

Enamel as a Common Design

The research team believes that their confirmation of ganoine production associated with two of the three proteins used in human enamel is evidence of our enamel’s fishy past. And the presence of ganoine-covered scales, but not ganoine-covered teeth, in ray-finned fish fossils dated over 400 million years old is, in their view, evidence that our smiles started out on the scales of fish. These are both worldview-dependent interpretations of their observations.

Their discoveries about modern genes and ancient scales do not demonstrate common ancestry. They just reveal what used to exist on some living things and what still does on some. The dates assigned to these fossil fish are also derived from worldview-based interpretations. (See “Doesn’t the Order of Fossils in the Rock Record Favor Long Ages?” to learn more.) These evolutionary just-so stories ignore the biblical account of Creation and of the global Flood that suddenly buried the fish in this study about 4,350 years ago.

What Ahlberg’s team has actually demonstrated is variety in the common designs our Creator used to provide teeth, scales, and even some reinforced bones to many animals and to us. Many different sorts of animals with teeth and scales, both with and without enamel, are preserved in the fossil record, but that does not reveal they had an evolutionary relationship. It is possible that some of God’s original fish had scales or teeth without a protective covering or that the genetic ability to produce the hard covering was lost through mutations over time—a possibility the researchers also acknowledge. But again, this situation would not represent an evolutionary gain of information, only a loss of existing information.

Where did the information to form these genes come from in the first place? Molecules-to-man evolution has not provided that answer. Nevertheless, evolutionists assume they must have evolved because they exist and try to solve the mystery of what came first. But God’s Word, the Bible, provides the answer in Genesis. There is no mystery. In the space of just two days God spoke all kinds of fish, all kinds of birds, all kinds of land animals, and the first man and woman into existence. Scales and teeth did not evolve; all had what they needed from the beginning. The various forms of enamel-like materials, the similarities of some even at a genetic level, and their presence on both scales and teeth all affirm our wise Creator’s use of similar designs in many different kinds of living things.

Previous Article Super Staph in the Community: Is It Evolving? Next Article Did Spiders Evolve Knees Through Gene Duplication?