Fish Brains Grew Till We Have Faces, Evolutionists Say

Mirror, mirror, on the wall, what’s the fishiest fable of them all?

Evolutionists say they have filled in the gaps in the origin of the human face. Building on a 2013 report about a placoderm that turned an earlier fish story on its head the latest contributor to facial history—Romundina—is being advanced as one of the most primitive jawed vertebrates. Romundina, an 8-inch long armored fish found in Silurian and Devonian rock, was a fish of such very little brain that its nostrils had room to sink back between its eyes.

Darwin claimed in his book The Expression of the Emotions in Man and Animals that, because some animals have expressive faces, the human ability to display emotion through facial expression is a consequence of human kinship with animals. “The face is one of the most important and emotionally significant parts of our anatomy, so it is interesting to understand how it came into being,” says Per Ahlberg, coauthor of the latest fish story to be published in Nature.1 The study explains the step-by-step transitions that presumably occurred during evolution of the face from a primitive lamprey-like ancestor.

From Jawless to Jaws

Evolutionists now imagine that the ancestor of all jawed vertebrates—a category that includes most fish, all terrestrial vertebrates, birds, and us—was an armored jawed fish known as a placoderm. This ancestral placoderm, they believe, evolved from lamprey-like jawless fish. A good bit of creativity is needed to support this claim. One of the problems is that, as they try to sketch out evolutionary transitions guided by vertebrate embryonic development, they hit a bit of a roadblock in trying to transition from jawless to jawed vertebrates.

A jawless vertebrate, lacking a jaw, has a face with a big toothy lip-like structure and a single “nostril” in between its two eyes. Jawed vertebrates, like us, have two nostrils positioned somewhat forward of the eyes, allowing plenty of room for a bigger brain. Embryologically, the lamprey’s big upper “lip” and “nostril” is formed by blocks of tissue that grow forward along each side of the lamprey’s small brain to meet in the middle. The corresponding blocks of tissue in jawed vertebrate embryos grow forward in the middle underneath the brain, pushing between the two developing nostrils we are accustomed to seeing in the mirror. Therefore, lampreys have one nostril and we have two. 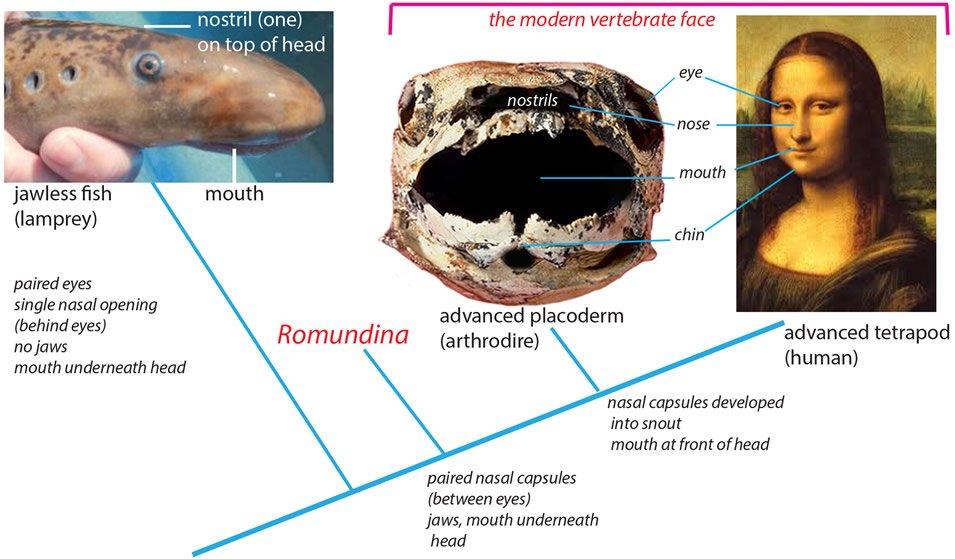 This sequence summarizes the proposed evolutionary origin of the human face from its earliest lamprey-like jawless vertebrate ancestor. In this scenario, evolutionists say that jaws had to evolve, then two nostrils had to form in place of one, and then the growing brain had to push the nose farther forward. Image from The Conversation 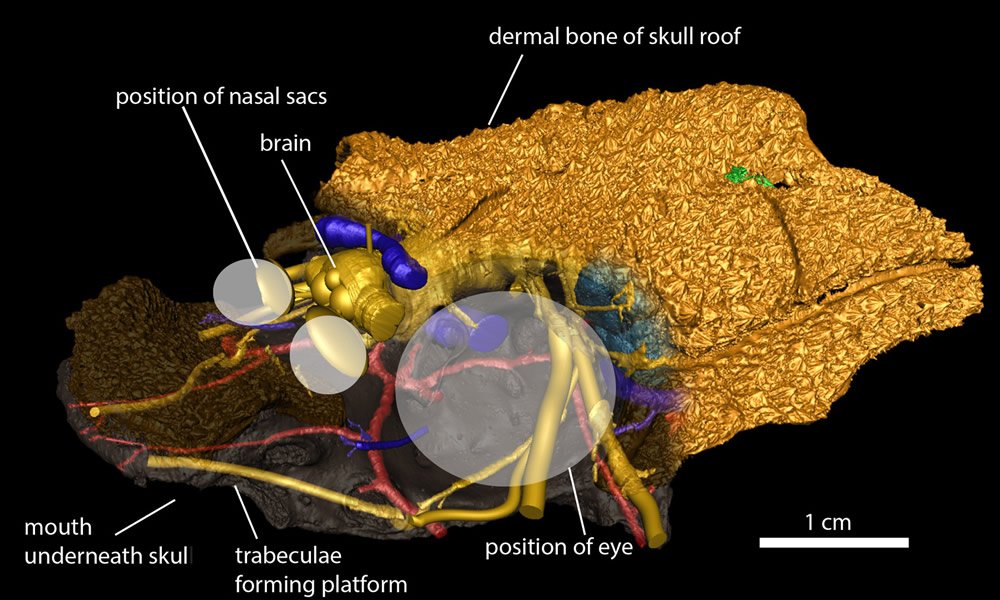 This is what scientists think the brain, eyes, and nostrils of Romundina would have looked like. It was based on X-ray images of its fossilized skull. Two nostrils were set back between the eyes in front of a small brain. Evolutionary scientists believe these two nostrils were the earliest forerunners of our nose. Image by Vincent Dupret, Uppsala University through The Conversation

From Embryo to Evolution

Evolutionists still rely on the discredited embryonic recapitulation theory to demonstrate how various evolutionary transitions supposedly occurred. Therefore, the fact that the facial architecture of jawless vertebrates develops in a pattern completely opposite to that of jawed vertebrates puzzles evolutionists. Embryology reveals why jawed vertebrates are endowed with two nostrils and lampreys with only one. But since embryology is supposed to “recapitulate phylogeny”—passing through evolutionary ancestral stages during development—how did evolution of the vertebrate face do an about face and switch the way it formed? Why did we evolve a face with two nostrils instead of keeping the pathetic alien look?

Connecting the Dots from Fossil to Fossil

A three-dimensional digital reconstruction of Romundina was created from synchrotron-based X-ray images by scientists from Sweden’s Uppsala University. The resulting virtual image, the scientists write in Nature, fills the gap between jawless and jawed vertebrates and enables them to demonstrate the steps that happened as the vertebrate face evolved.

Romundina has a jaw and two nostrils. Its forebrain is as small as a lamprey’s. Its nostrils are set deep into its face, practically between the eyes. Lead author Vincent Dupret says, “This skull is a mix of primitive and modern features, making it an invaluable intermediate fossil between jawless and jawed vertebrates.”2

Evolutionists think that the fossil record is a timeline of the order in which organisms evolved. By lining up organisms according to their traits, they imagine they are seeing a record of transitions occurring.

The placoderm Entelognathus was put forth in 2013 as a 419–million-year-old missing link early on the evolutionary path to modern facial recognition. Deciding it combined enough characteristics of bony fish and placoderms to be ancestral to both, evolutionists believed this was the first animal to have evolved upper and lower jaw bones.

Dupret and Per Ahlberh have analyzed the face and brain of Romundina’s skull. Though dated at 415 million years, they believe it is even more primitive than Entelognathus because its forebrain is smaller and its nostrils are shoved back between its eyes. Dupret says, “Watching the complete 3D model of this tiny fossil with all structures reconstructed—the nerves, blood vessels, and so on—is a big thing. But then realising that it is like watching a ‘mirror to the past’, staring back at you, with some structures close to ours, while other are closer to jawless vertebrates, is a little like Prince Hamlet looking at Yorick’s3 skull!”

Dupret and Ahlberg believe that some mesh-like cartilage in the floor of Romundina’s braincase was the primordial support for the next evolutionary innovation to come: a larger forebrain housing advanced smell-sensing ability as is found in more “advanced” jawed vertebrates. The larger forebrain would push the nose out ahead of it and after millions of years of evolution form a proper snout.

“In effect, Romundina has the construction of a jawed vertebrate but the proportions of a jawless one,” Ahlberg explains. “This shows us that the organization of the major tissue blocks was the first thing to change, and that the shape of the head caught up afterwards.”4

The scenario mapped out by Dupret and Ahlberg will doubtless create controversy among evolutionists. Flinders University paleontologist John Long, commenting on the study, says, “Every major paper on the subject in the past five years in Nature gives a completely different result of the relationships of the various placoderm families.” He hopes his work will also contribute to resolving these evolutionary relationships but says that thanks to this latest “paper we now know that the origin of the face, at least in terms of the symmetry and placement of eyes, nose and mouth, is another hallmark feature that first evolved in ancient placoderms, now passed on to us humans, through the gift of evolution.”

The embryologic development of vertebrates with sizable brains does allow room for the developing brain. The size and shape of the brain does affect the final position of the facial features. But evolutionists, harking back to the discredited theory of embryonic recapitulation, regularly assume that these developments occur as a result of evolutionary experimentation rather than design. The ability to line up a series of fossils according to their similarities and differences does not demonstrate that transitions occurred, however, only that there is much biodiversity in the world. Existence does not reveal origin. And embryologic development—which follows a blueprint programmed into the genome of each organism—produces a fully functional organism.

Ancient fish DNA had no way to acquire information to become anything more than fish. Humans are humans because they have human DNA. Human DNA has always directed the entire process of human embryologic formation. We know from the Bible that God created Adam and Eve in His own image, and as their human descendants we too have faces. That most animals have faces is a consequence of God creating them that way. He created all kinds of animals at about the same time He created man, not by using eons of evolution.

How can anyone know anything about these unwitnessed origins? Only through the account of an eyewitness, who happens to be the Creator of all. And God’s creating all kinds of animals and the first humans to reproduce after their kinds fits what we actually see in biology; the imaginary transitions posited by molecules-to-man evolution does not.

Previous Article A Tale of Shale and Oxygen in the Explosion of Life Next Article Rocks Around the Clock: Do Zircons Contain Reliable Time Stamps and Early Earth’s Secrets?