A dentist once told me that I didn’t need to floss all my teeth—only the ones I wanted to keep! Teeth show wear from abrasion and accumulation of dental calculus on the outside, particularly without the benefit of modern dental hygiene. But the inside of our teeth also tells a story. Our permanent teeth, because they are designed to last a lifetime, preserve a record of their growth in their microscopic structure. A study comparing the teeth of modern humans, chimpanzees, and hominid fossils has found results that surprised  evolutionary researchers. In a nutshell, they discovered that the teeth of Homo erectus had a growth pattern matching that of modern humans and not chimpanzees. 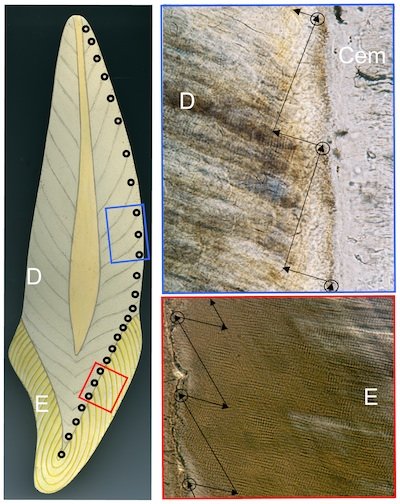 The tooth diagram on the left shows the tooth root (at the top) and the exposed crown of the tooth covered with enamel (E). Lines in the enamel (E) and the dentine (D) indicate the microscopic markers, analogous to tree rings, that show the regular pattern of tooth growth. Microscopic examination of a tooth root (top right, with the dentine adjacent to the cementum that helps hold the tooth in place) and crown (bottom right) can be used to measure how fast the tooth parts grow and to determine whether one part has been growing longer than another. Image credit: www.plosone.org

“Our roots are stuck in the past,” commented study coauthor M. Christopher Dean, indicating his belief that molar roots had failed to keep up with human evolution.

In order for teeth not to rip out of the jaw once chewing begins, they need sturdy roots.

In order for teeth not to rip out of the jaw once chewing begins, they need sturdy roots. The study’s authors noted that the hardest bit of data to uncover was the age at which chimpanzee teeth begin to peek through the gums—presumably owing to the general unwillingness of young chimpanzees to open wide for a gum inspection. Ultimately they did succeed in comparing the age at which chimp and modern human teeth erupt to the age at which the tooth roots begin to grow rapidly. If chimps are somewhat uncooperative, it can be safely said that hominid fossils are unforgivably reticent about the age at which their teeth erupt, as fossils can’t be observed teething in real time and don’t have gums. Once their teeth erupted, though, the original owners likely began to use them to chew, so eruption was gauged by the presence of abrasion.1

Dean and Tim Cole compared the age of the tooth crowns to the age of the roots indirectly. They examined the teeth of modern humans, chimpanzees, and four “hominids” by looking at the microscopic structure. Tooth growth follows a circadian rhythm. Tooth enamel covering the crown and the dentine core of a tooth’s root both contain telltale microscopic markings produced by daily fluctuations in growth.They first determined in modern specimens the growth rate represented by these markings. Then, by comparing the markings in crowns and roots, they were able to calculate whether or not each tooth root had a significant head start.2

Chimpanzee molars, it turns out, simultaneously erupt through the gums and get a root growth spurt. Modern humans, however, begin growing a sturdy root for their molars long before the teeth erupt. Four “hominid” molars, felt by Cole and Dean to represent the course of human evolution from ape-like ancestors, included three apes (one being an australopithecine) and one Homo erectus. The researchers were surprised to find the molar from the Homo erectus showed a growth pattern comparable to modern humans, with the root having gotten a head start in growth before the tooth erupted.3

Homo erectus had smaller teeth than apes. (So do modern humans.) And humans have a longer childhood than apes. The researchers propose that smaller teeth in Homo erectus represented an evolutionary change from ape-like ancestors reflecting a human’s longer childhood and diet of more cooked foods. They indicate that selection pressure caused the teeth to erupt later in a human than an ape because the childhood is longer. But they consider the fact that molar roots begin growing much earlier than human teeth to be an “evolutionary leftover,” saying that tooth roots don’t cost the body much energy and so failed to evolve a delay in development as hominids became more human.4

A much more straightforward—not to mention biblically correct—way to view the data is to note that humans and chimps develop differently because they do not share an evolutionary ancestor. Homo erectus’s molar grew like a modern person’s molar because both are human. God’s design for human development includes longer childhood than apes, smaller teeth than apes, and molar roots that begin growing long before the teeth erupt. God created apes and humans on the same day about 6,000 years ago without using evolutionary predecessors.