Surprising evolutionists but not biblical creationists, scientists have discovered an additional layer of information in DNA.

With genes, it isn’t just “what they say” but also “how they say it” that counts. The genetic code is the language used by DNA to tell cellular machinery what amino acids to string together into each protein. Those instructions are copied onto messenger RNA (mRNA) and implemented. But in addition to spelling amino acid sequences, the coding regions in DNA, scientists have learned, have embedded in them an additional code!

Two Codes in One

The genetic code “spells” instructions by which ribosomes build proteins using a “three-letter” (three nucleotide) codon to designate each amino acid. (Amino acids are the building blocks of protein.) Some amino acids can be specified by more than one codon. For instance, GGC, GGA, GGU, and GGG are all mRNA codes for the amino acid glycine. Codon “redundancy” is widely considered a “degenerate” evolutionary feature. However, an analysis published in Frontiers in Genetics shows codon redundancy is neither random nor “degenerate” but purposeful. Codon redundancy is actually an information-packed code within a code.

Far from being an evolutionary accident, these not-so-redundant and definitely-not-degenerate “synonymous” codons represent an independent secondary code in DNA. Unlike regulatory non-coding regions of DNA (often mistakenly thought of as “junk,”) this secondary independent code is woven into the coding regions of DNA and affects the speed at which amino acids are stitched together by ribosomes.

There are four nucleobases used in DNA. (There are also four in RNA. Uracil (U) and thymine (T) are functionally equivalent nucleobases in RNA and DNA, respectively.) With four nucleobases ( “letters”) available to code for twenty amino acids using three-letter codons, there are 4³ = 64 possible codons, so there is plenty of room for redundancy—and as it turns out plenty of room for life’s Designer to use that redundancy to create a whole extra set of instructions right on top of the first.

Simplistic thinking would suggest that if a codon codes for the same amino acid, then a protein made using that substitute should work just as well. But that is not the case. Though certain codons appear to be simple synonyms coding for the same amino acid, in reality the “choice of word”—the particular codon—used in the gene (and in the mRNA matching it) varies the rate at which the ribosome builds that protein.

As ribosomes build proteins, they pause when they encounter signals formed from these “degenerate” codons, researchers report. These “translational pauses” allow “the necessary time to mechanically perform folding operations”1 on the protein being synthesized. Proper protein function depends on proper folding, so this extra layer of code is very important.2

Most proteins do not work correctly unless they are folded into the correct three-dimensional shape. The elaborate way a protein folds is greatly influenced by the way its amino acids interact with each other. The folding is so complex, however, that it cannot wait until synthesis is complete to be folded. Unlike sheets coming out of your dryer, complex protein chains must be folded even while they are being assembled. Various biochemical “chaperones” help with this. This folding takes a little time, and therein lies the importance of the code that authors David D’Onofrio and David Abel have uncovered and begun to crack. 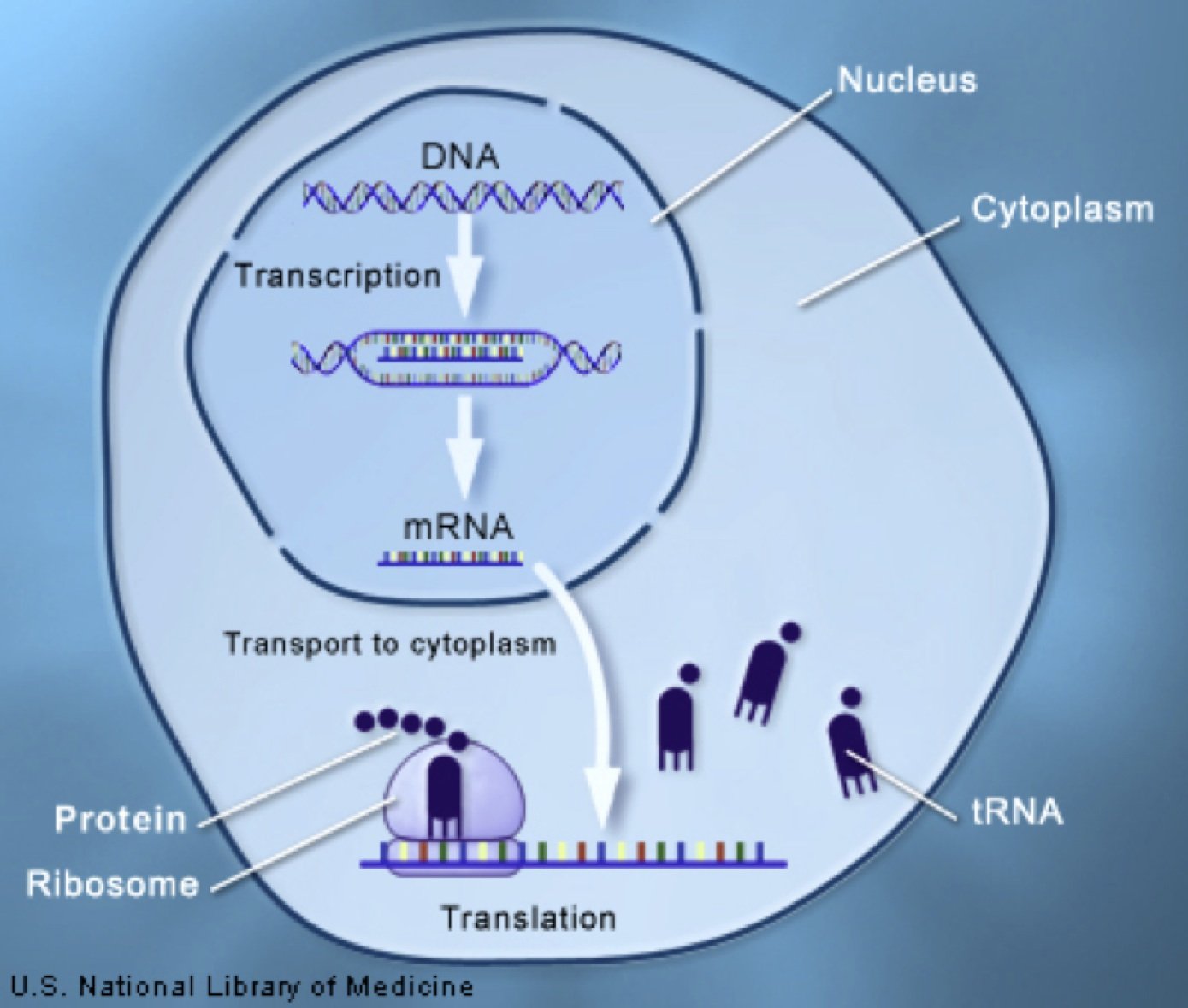 The sequence of nucleotides in a gene is copied (transcribed) into a piece of messenger RNs on the mRNA. Learn more in the discussion guide for Cosmos, episode two, “Some Things Molecules Do.” Image from US National Institutes of Health.3

D’Onofrio and Abel identified a series of “universal pausing rules” in which two “degenerate” three-letter codons appear together as a “hexanucleotide.” Furthermore, each hexanucleotide signal for a translational pause (TP) is consistently and unambiguously interpreted by the ribosome. “The TP codons in the genome constitute a code co-existing with the genetic code,” they write.4 Furthermore, the “decoding algorithms” are built into the “hardware within the ribosome.”5

The authors liken the ribosome to a computer processor hard-wired to follow the instructions written in both codes. The ribosome must read both the code for the primary amino acid sequence and the pauses that allow the protein to be properly folded. After all, a code is completely useless without a code-reader! But ribosomes, like the other parts of a cell, are built in accord with the genetic blueprint in a cell. Once again we see the irreducible complexity in the biological systems God designed when He created life.

Evolutionists have long said that the third nucleotide of a codon—the one that often differs in “degenerate” codons—is the “wobble” one, the one that can mutate without causing a problem.6 Many evolutionary proposals, as detailed by intelligent design proponent Casey Luskin on Evolution News & Views, depend on the assumption that synonymous codons are functionally equivalent. However, nothing about this discovery supports the notion that random natural processes can create information and move it across the biological barriers to increasing complexity as molecules-to-man evolution requires.

Nothing about this precise, unambiguous, critically important secondary code suggests it is a product of random chance. On the contrary, as Answers in Genesis molecular geneticist Dr. Georgia Purdom observes, this study illustrates there is nothing random about the structure of DNA. DNA is a product of design, not disorder!

Multiple codons in DNA, after being transcribed into RNA, code for the same amino acid. For example, GGU, GGC, GGA, and GGG all code for glycine. So it was thought that it didn't matter what codon was used since the same amino acid resulted in the protein. The genetic code was thought to be redundant and the official scientific term is "degenerate." However, nothing could be further from the truth.

Evolutionists have conveniently—and now science confirms quite wrongly—considered non-coding DNA for which they did not know a function to be useless leftover evolutionary “junk.” This discovery now demonstrates that even coding DNA has an additional regulatory code embedded within it.

“Junk” DNA is not junk and the genetic code is not “degenerate!” says Dr. Purdom:

Once again we see an example of codons not being “redundant” and the genetic code not being “degenerate.” Although multiple codons may code for the same amino acid, the codons have other functions too and so the specific codon is important.

This is not the first or even the second time DNA has been found to contain far more information than once thought, says Dr. Purdom. There are multidimensional layers of information that affect not only translation into proteins but transcription itself:

It was discovered late last year that some codons, called duons, not only code for an amino acid but also have regulatory functions that affect transcription—copying genes from DNA into RNA. This dual functionality of codons leaves very little “wiggle room” for evolution and seriously constrains it.

While random mutations might be beneficial for one function of the codon, they would very likely be detrimental to the other function.  The genetic code clearly shows design and not disorder.

Concurring with Dr. Purdom, the authors of this study write that they have shown

. . . why the term ‘degeneracy’ is completely inappropriate. This dual coding functionality of redundancy is anything but ‘degenerate.’ It represents, instead, far more sophistication, layers, and dimensions of formal prescription.7

Multidimensional codes and new levels of specified complexity are exactly what ID predicts, and they’re exactly what this paper is reporting. It’s this sort of sophisticated, information-rich control that is expected by intelligent design, in contrast to Darwinian biology which fails to anticipate it. On the contrary, Darwinian advocates publish mountains of papers banking upon the unquestioned assumption that there is no important, functional reason for the existence of “redundant” or “degenerate” features.

Indeed, this study illustrates a whole new level of irreducible complexity in the living cell. The genetic code contains the blueprints for building biomolecules of amazing complexity and assembling them into cells and cells into functioning organisms (like us). It is highly sophisticated, containing multiple layers of information in its coding and non-coding regions. Where does the information embodied in the genome, including the information to build the ribosomes to read the coded information, come from? Evolution has no answer.

Without an information-giver, there can be no life. Information is required for life. With no source of information, evolutionary science has never found a way to generate life through random chance from chemical soup. Intelligent design is correct that this wondrous system, like so many others in both biology and physical science, screams “designer!” But just who is that designer?

To identify “the Designer,” the Author of origins, we need a historical record of our otherwise unwitnessed origin. We need an eyewitness account of where we came from. The historical record provided by our Creator in Genesis is constantly confirmed by the observable discoveries in nature. The Author of all the codes embedded in the genetic code—a code system that reaches across all forms of life because it was designed by one Common Designer8—is the Creator God of the Bible:

Previous Article Fish out of Water Said to Rise, Lift up Their Heads, and Walk Next Article Dreadnoughtus Takes the Prize for Largest Confirmed Land Animal