Natural Trap Cave preserves a treasure trove of animals from the Ice Age until the 1970s.

Natural Trap Cave—an 85-foot sinkhole in north-central Wyoming in the foothills of the Bighorn Mountains—until the 1970s was just that: a natural trap. The 15-foot wide opening admitted enough debris and unfortunate unsuspecting animals over the years to build a mound about 30 feet deep rising from the floor of a 120-foot wide bell-shaped room. In the 1970s the U.S Bureau of Land Management (BLM) covered the hole with a metal grate but this summer opened it for the first of three scheduled excavations hoping to harvest information about the Pleistocene animals that entombed themselves.

Soft Tissue from the Ice Age

Animals that have fallen into the sinkhole, scientists have found, include many extinct species from the Ice Age. Hoping to find soft tissue preserved in the frigid—always about 40 degrees—yet very humid depths of the cave, scientists led by Des Moines University paleontologist Julie Meachen rappelled down to dig through their remains.

“Some bones still have collagen with intact DNA for genetic testing and some fossils are fragments crushed by rocks,” says Meachen. “We found evidence of bison, a bit of gray wolf and quite a lot of cheetah and horse.” They hope to recover DNA and learn more about how those Ice Age animals compare genetically to similar species today as well as clues to the climate they lived in and what they ate.

“It's an incredible site. It definitely is one of the most significant sites that BLM manages and it will provide very, very important information,” says BLM paleontologist Brent Breithaupt. “They're very excited about the potential for what they've found. The analysis, yet, is still very preliminary.”

The team has hoisted about 200 large bones from animals that roamed North America during the Ice Age, which secular scientists believe was from 12,000 to 23,000 years ago. They have also recovered lots of tiny fossils from smaller animals like birds, lizards, and snakes. Now the next phase of the work must begin: analysis of the material they recovered.

While the dates assigned to unobservable events in the distant past are biased by the worldview of those assigning the dates, one small chance event will yield some observable and confirmable data about the decay rate of animals in the present cave conditions. A rat fell into the cave and died during the 2-week dig. The scientists left it there to see what might be left when they return. Two more summer expeditions are scheduled.

Answers in Genesis geologist Dr. Andrew Snelling notes that since soft tissue like collagen has been recovered in other Pleistocene remains, the scientists are not terribly surprised of course that the animals in the sinkhole still have it in their bones:

12,000 to 23,000 years ago in the secular reckoning is actually right at the end of the post-Flood Ice Age, probably about the time of Abraham (around 2000 BC). So no one is surprised to find collagen and intact DNA with these bones.  The sinkhole theory makes sense, plus the animals falling in to their deaths.  The same thing happened to kangaroos in Australia to make fossils of them.  The whole story here is very straightforward. These are all post-Flood animals that nearly made it through the Ice Age after their ancestors left the Ark about 400 years earlier. 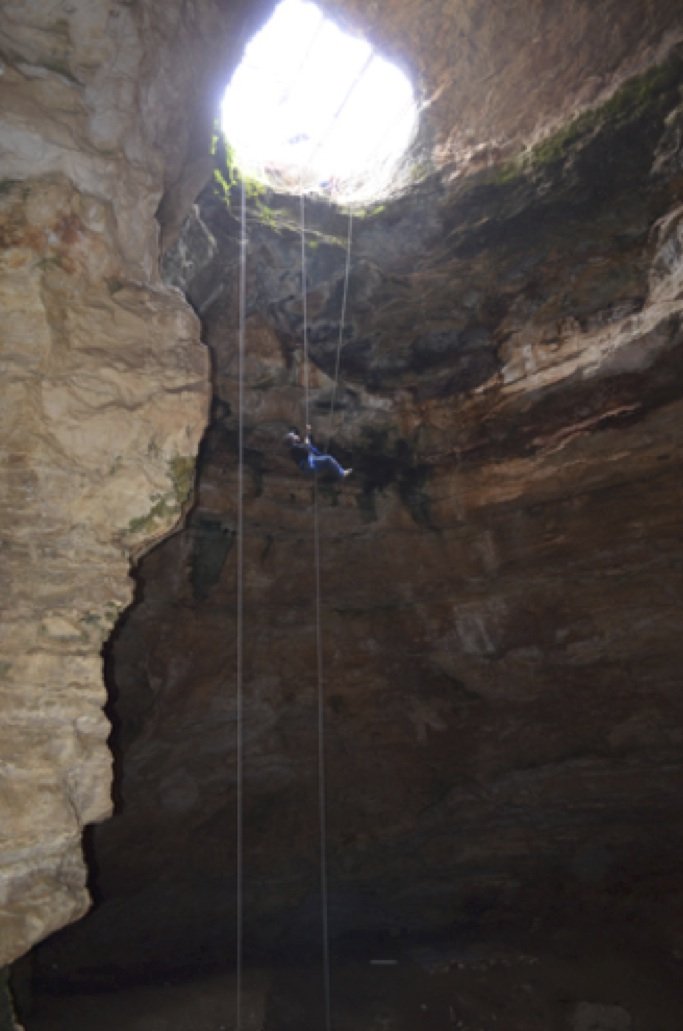 Scientist ascends from Natural Trap Cave. Her team is engaged in renewed efforts to recover the remains of thousands of animals, many of which are extinct species from the Ice Age, for analysis. Image: Associated Press, Bureau of Land Management, through CBS News

Sinkholes, which generally form when limestone bedrock is dissolved and gives way beneath surface soil, are fairly common but do occur more commonly due to the geology and other factors in various hotspots around the globe. Read more in Dr. Snelling’s article about the sudden and tragic collapse of a sinkhole in Florida, “The Florida Sinkhole Tragedy.”

Stacks of underground fossil-bearing limestone layers, up to several thousand feet thick, deposited during the global Flood of Noah’s day about 4,350 years ago, were exposed at the land surface by erosion as the Flood waters drained off the land. As the water continued to drain prior to the beginning of the Ice Age, underground it would have dissolved minerals from the rock layers, especially lime from limestone layers, opening up voids. Some of these voids in the limestone beds would have eventually reached near the land surface. There, covered by a veneer of soil, these limestone beds would have still housed groundwater aquifers, but because the limestone can be dissolved by slightly acidic rainwater, they can also give way and form sinkholes, either gradually or suddenly.

We look forward to learning more about the animals that fell to a refrigerated death in Natural Trap Cave as their remains are analyzed. Extant or extinct, all these land animals are descendants of the animals that disembarked from Noah’s Ark and diversified to fill the various ecological niches in the post-Flood world several thousand years ago. The Ice Age in which they lived and died was a direct result of unique post-Flood conditions, which you can learn more about in how “The Genesis Flood Caused the Ice Age.”