Environmentally driven changes in diet said to have driven evolution of humans.

Rapid changes in environmental conditions at the crucial time our supposed primitive ancestors were evolving their human characteristics may have stimulated the evolution of man, according to a study from Penn State geoscientists. By analyzing the carbon isotopes in fossilized leaf wax from early Pleistocene rock in northern Tanzania’s Olduvai Gorge, graduate student Clayton Magill and geoscience professor Katherine Freeman found that the east African ecosystem transitioned abruptly back and forth between wet woodland and drier grassland. This region is part of East Africa’s so-called “cradle of humanity” where evolutionists believe ape-like creatures began walking upright and developing bigger brains in their pathway to humanity about two million years ago. 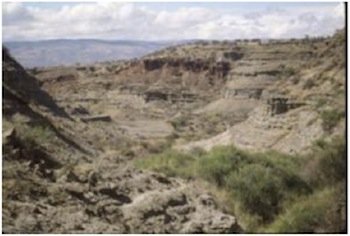 The authors of two recently published studies in Proceedings of the National Academy of Sciences examined the isotopes in fossilized material from Olduvai Gorge, a place where evolutionists claim much of the evolutionary transition to humanity occurred. The region is conventionally dated at about two million years. They found that the ecosystem of the region had undergone many abrupt transitions that likely affected the terrain and the food supply of whoever and whatever lived there long ago. Image credit: researcher and study co-author Gail Ashley, www.sciencedaily.com.

Correlation of the data demonstrated—not surprisingly—that trees were plentiful when the climate was wetter and grassland was more plentiful when the climate was drier. The surprise to the researchers was the frequency of abrupt climactic shifts indicated in the rock record. Bible-believing geologists believe Pleistocene rock was deposited during the Ice Age in the centuries after the global Flood. (The 2 million year dates are based on worldview-based unverifiable interpretations of radiometric measurements of volcanic rock layers in the vicinity of the region where the samples were collected. Based on a worldview that accepts the Bible’s account as historical, we know that this rock is less than 4,500 years old.)

“The research points to the importance of water in an arid landscape like Africa,” says Magill. “The plants are so intimately tied to the water that if you have water shortages, they usually lead to food insecurity.”

The researchers assert that the rapid shifts in climate with resultant alterations in available terrain and food forced our hominid ancestors to walk upright and think of ways to adapt to dietary challenges.

The researchers assert that the rapid shifts in climate with resultant alterations in available terrain and food forced our hominid ancestors to walk upright and think of ways to adapt to dietary challenges. Evolutionists believe that primitive hominid ancestors like Homo erectus gradually developed greater intellect and bigger brains as they had to figure out how to survive without trees and learn to put their hands to work making tools and cooking food. Cooked food can supply lots of calories more efficiently than grazing all day, so many evolutionists believe culinary arts fueled the development of the human brain from ape-like predecessors. (See “Brainfood: Cooking” for more on that Promethean theory.)

Magill says, “Early humans went from having trees available to having only grasses available in just 10 to 100 generations, and their diets would have had to change in response. Changes in food availability, food type, or the way you get food can trigger evolutionary mechanisms to deal with those changes. The result can be increased brain size and cognition, changes in locomotion and even social changes—how you interact with others in a group. Our data are consistent with these hypotheses. We show that the environment changed dramatically over a short time, and this variability coincides with an important period in our human evolution when the genus Homo was first established and when there was first evidence of tool use.” He adds, “Together, these two papers shine light on human evolution because we now have an adaptive perspective. We understand, at least to a first approximation, what kinds of conditions were prevalent in that area and we show that changes in food and water were linked to major evolutionary changes.”

The rapid changes in vegetation and climate discovered by the researchers are consistent with the meteorological instability that prevailed in the world following the global Flood. Unique conditions triggered the Ice Age in the centuries after the Flood, and continuing climate changes produced the transformation of some wet areas to desert—including the “great drying of Africa” to which the article refers. In the centuries following the global Flood and the eventual dispersion from the tower of Babel, humans did face many environment challenges as they spread out through the world, but they were already equipped intellectually with fully human brains. God created Adam and Eve fully human on the same day as land animals about 6,000 years ago. Humans did not develop from ape-like ancestors, and no amount of ecological challenge could have enabled ape-like creatures to acquire the genetic information to transform their brains into those of humans.