Too Serious to Ignore

Growing up in Kenya, Elly Odongo never doubted creation, but he didn’t consider it especially important, either. Then, when Elly was a middle-aged security guard at a U.S. military base in Iraq, God used a soldier’s ministry of showing creation videos to change his life.

Elly was so impressed with the foundational importance of the creation message, which equips Christians to present the gospel powerfully and explain life’s greatest challenges, he decided God wanted him to proclaim that vital message in his homeland. His vision is broader than his own country: “I would like to bring this message to Africa, particularly to Kenya and East Africa, because I know the need is great, and the evidence of creation is all around.” 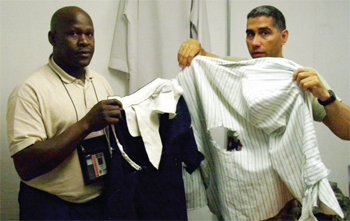 While serving as a base guard in Iraq, Elly Odongo (left) of Kenya displays holes caused by an enemy rocket that penetrated his quarters. Watching creation videos on base (including at the time of the rocket attack) moved him to become a creation missionary back home.

Elly’s burden for all of Africa began during his twenty years in the Kenyan military before he became a security guard. While serving a stint as a UN peacekeeper in the West African nation of Sierra Leone, he was troubled to see that Christians did not have a strong witness because they were elevating cultural differences and traditions above God’s Word.

Elly believes the truth of creation can change the world and that as he works together with like-minded friends, that message can turn East Africa upside down.

In September 2011, Elly left his job in Iraq and began studying for a four-year theology degree at the East African School of Theology. Earning a college degree would normally be impossible on a meager guard salary, but God prompted two American soldiers from the base he was guarding to sponsor him.

Elly’s degree from EAST will give him credentials in the Assemblies of God to visit churches all over Kenya. Seventy percent of Kenyan Protestants are Pentecostal, with more than five thousand churches in East Africa.

Elly is also excited about reaching students, since Kenya does not have the same restrictions as many Western nations. Sadly, the National Museums of Kenya are aggressively promoting evolution in the schools. Elly is eager to take advantage of a window of opportunity in the public schools and to position himself strategically to help keep that window open.

Though busy with school and a wife and children, he has promised supporters to “hit the ground running, because time is not on our side!” Others have commended his hard work and dedication during his first year of college. Moreover, when he’s not in class, he is busy translating creation seminars into Swahili, which is an official language of five East African nations and is spoken by more than sixty million people. He is also diligently researching creation evidence specific to Kenya to give his ministry more impact there. He finds the magnitude of the task humbling: “This is big and it has to be treated with seriousness.”