Visitors to Pastor Rick Piatt’s church office shouldn’t be surprised by the baby monkey in the playpen. He has twenty-seven more monkeys at home—along with an alligator, two crocodiles, fifty finches, and fifteen snakes. In addition to being a pastor, Rick is a licensed caregiver for endangered species in Florida, and he uses his animals to proclaim the gospel of a loving Creator.

Rick’s exotic interests help him reach audiences who might never visit a church.

Rick says the Lord called him to preach during his senior year at college, where he was studying to be a zoo veterinarian. So he sold his beloved exotic animals, including thirteen monkeys, to pay for seminary.

But God still had plans for Rick’s exotic interests. After Rick finished his doctoral work, animals returned to the Piatt household, and his ministry exploded into churches, countless vacation Bible schools, scout camps, the YMCA, and other venues. Today, his educational, creation-based animal presentations are in high demand. And his nonhuman “friends” help him reach audiences that might never visit a church. 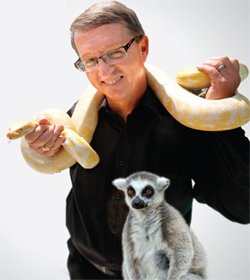 Image from The Ledger, May 7, 2012. © 2012 The Ledger. All rights reserved. Used by permission and protected by the Copyright Laws of the United States. The printing, copying, redistribution, or retransmission of this Content without express written permission is prohibited.

Rick’s certifications also give him unique credibility with professional audiences. Recently the Zoological Association of America invited him to give a talk on primate care at an international conference. As a result, Rick was able to explain his ministry to an audience who might never otherwise have heard such a message. And along the way he gently challenged their evolutionary assumptions.

Rick loves the animals God has given into his care, especially the primates, and he says they accept him as one of their number. So what is the difference between these very intelligent, social animals and human beings? Is it language, emotion, intelligence, tool use? Rick finds all of these in the animal kingdom to some degree. For example, some researchers claim that a monkey is about as intelligent as a two-year-old human. Would that make the monkey as valuable as a human baby?

Rick answers this question from the Bible: man alone was created in the image of God, with an eternal soul and capacity to communicate with Him. That is what makes a human baby special. That is his core message: God loves all of His creatures, but human beings are unique. Humans are not and never have been members of the animal kingdom. Christ died and rose again so that human beings can be saved from sin and death, enjoying a personal relationship with the Creator for all eternity—a privilege no animal was ever given.

Next Article Too Serious to Ignore