As Olympic athletes returned from London with gold and silver medals, some spectators returned with a much more valuable treasure.

They learned of that treasure from one hundred volunteers from the USA and Canada, who arrived on August 3 for an eleven-day evangelistic outreach. Volunteers distributed the booklet, Big Ben Time, which uses the famous clock tower to lead into how Adam’s sin brought a time limit—death—to every person, and then tells how Christ brings eternal life. This booklet, specially prepared for the 2012 Summer Olympics, gave volunteers many opportunities to witness on the streets of London. 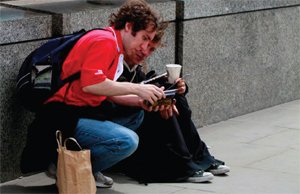 Every two years the winter or summer Olympic Games provide a golden opportunity to spread the gospel. Visitors from all around the world will take the message back to their home countries, whether through personal testimonies of their own salvation or simply by carrying a gospel booklet home in their bag of souvenirs.

During their sixth Olympic effort, volunteers with Answers Worldwide (an outreach of Answers in Genesis) saw God provide amazing openings for sharing the gospel. On the spur of the moment, one Londoner invited a team member to share the gospel with his family over afternoon tea, and some confessed Christ there and then. Once, when an angry police officer kicked a group out of a park, they moved to another public place and saw four people make credible professions of faith.

Others from non-English-speaking nations were impressed that someone had taken the time to translate the booklet into their language and accepted it gladly. Volunteers were even able to give copies to foreign dignitaries, such as the wife of Kenya’s prime minister and the Kenyan head of security.

Our team has witnessed to people from 110 of the 204 countries at the Olympics.

In all, the group reported distributing more than 53,000 booklets, to people from 110 different countries. Experience shows that each booklet is read by an average of seven people.

Only God knows how He will continue to use those Olympic booklets to draw people to faith in Christ, but 27 people made public professions while talking to volunteers in London. The treasure they take home—eternal life—will be theirs forever and will never lose its luster.

For a PDF of the Olympics outreach booklet Big Ben Time go to http://www.answersingenesis.org/go/bigbentime