A couple of years ago, one of our AiG board members, Carl Kerby, organized a special vacation for himself and his wife in Jamaica to celebrate their anniversary.

But, like any good AiG board member, Carl stashed AiG resources into his bags. He wanted to distribute these to any churches/Bible colleges he could connect with while “vacationing.”

While in Jamaica, Carl had the opportunity to speak for 20 minutes at a conservative Bible college. A young pastor in the audience became very excited about the message. He had been concerned that the usual methods Christians were using to present the gospel were not very effective.

This young Christian leader had found that by just sharing the gospel using the New Testament, the recipients didn’t seem to really understand or were not even interested. From his own study of the Scriptures, he realized that to understand the gospel and its message of sin, repentance and salvation, he needed to begin with Genesis.

Once he started sharing the gospel starting with Genesis, he found it took him much longer to present the message, but people were extremely interested and their response showed they now really did understand what it meant to be saved. Even those who did not receive the free gift of salvation indicated they understood the entirety of the gospel and its implications.

This young pastor, Devon Linton, had also seen one of his best friends, who had been brought up in the church and seemed to believe the Bible, go to university and come out rejecting Christianity. This friend was taught billions of years and evolution in his university training, and as a result, couldn’t understand how one could believe in a God of love, when there was so much death and suffering in the history of the world. (At that time, Pastor Linton didn’t have access to AiG books that would have given this man an answer—how Devon now wishes he would have had these books at that time.)

Pastor Linton has also seen an increasing number of young people who were brought up in the church but went to university and come out very skeptical of the claims of Christianity and the Bible.

When Carl showed up in Jamaica with books and videos that taught how to defend Christianity and uphold the authority of the Word of God against billions of years and evolutionary humanism, Devon became very excited. These were just the materials he had needed—and until then, he didn’t know they existed.

Recently, we brought Pastor Linton up to our offices in Kentucky to see the ministry firsthand, and spend some time traveling with me to various meetings so he could learn more of how to present our material. 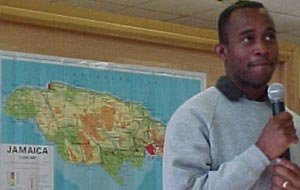 During the time he spent at the office, he also gave one of the most moving presentations I have heard anyone give to our staff. We taped his presentation so all of you can be challenged by this young pastor from Jamaica—who showed us all very clearly, that because of his study of—and commitment to—the Word of God, he had a refreshing depth of understanding of Christianity and the gospel that would put many Christian leaders in the USA and other countries to shame.

I had not known that Jamaica has more churches per square mile than any other country in the world! The Bible is still allowed to be taught in public schools, though Pastor Linton explained that the Christian basis this nation once had is slowly being eroded by the inroads of the teachings of billions of years and evolution. He also expressed dismay at some of the shallow and liberal theology that is being imported into the country from the USA.

Devon left our offices with renewed vigor to preach the AiG messages throughout Jamaica, and try to saturate the country with AiG literature. If the Lord so allows, he sees this strategy as a major way to stop the erosion of the country, and see many saved. Praise the Lord for Carl’s “vacation.”

As a ministry, we determined we would work closely with Devon and supply him with materials as God’s people continue to support us in our missions outreach program.

Jamaica is a country of only 3 million souls, but they are people who are going to live forever in Heaven or Hell. Please pray for Devon, and consider supporting our missions outreach (we supply such Christian leaders with lots of free material) to see as many as possible of these souls won to the Lord Jesus Christ. Perhaps you would consider providing a gift towards our Jamaican outreach.