We are seeing more and more “false prophets” arising in the church today. These teachers ultimately deny the true, saving gospel that everyone needs to heed.

Check out our 7 C’s of History DVD.

In the Matthew 25 passage referred to above, we read the parable of the ten virgins. Five wisely kept their lamps lit as they awaited the return of the bridegroom and five were foolish. From the context of this chapter and the preceding one, this passage helps expose the difference between nominal Christians (i.e., in name only) and true Christians.

John Gill, in his well-known Bible commentary, discusses the nominal and real Christians referred to in Matthew 25. He writes that there will be those who make “a profession of religion, and yet, at last, [will] be shut out of heaven.”

The word “virgins” in the parable describes those who are betrothed to Christ. Five neglected their steadfast preparation, and let their lamps go out and missed the joyful return of the bridegroom. They represent those who outwardly look like believers, but inwardly are not true Christians.

I have sometimes wondered whether the “foolish virgins” could apply to many church leaders/academics today—those who say they are Christians but have rejected the authority of God’s Word. They have relied instead on man’s fallible ideas to determine truth. These leaders may have never truly been born-again as the Bible teaches, and, among other things, have put their trust in “the scholars” or other religious leaders rather than the Word, Jesus Christ. 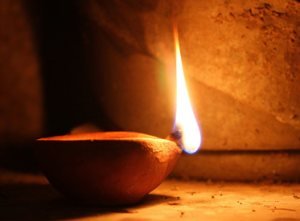 We must “keep our lamps lit” (Matthew 25) and also continue in our prayers for those who are not prepared for the return and judgment of Christ.

In essence, such “Christians” have placed their faith in the writings of man over the clear teachings of the Word—and also over many biblical doctrines, including the Fall of Adam and Eve into sin (Genesis 3).

Sadly, we are seeing more and more “false prophets” arising in the church today. These teachers deny the literal Fall and dismiss a sin nature inherited from a real Adam. Thus they ultimately deny the true, saving gospel that everyone needs to heed.

These church leaders and academics outwardly profess to believe in Christ, but like the false prophets of Jeremiah’s day (e.g., Jeremiah 23:9–40) and the Pharisees of Jesus’s day (Matthew 23:11–36), they are leading God’s people astray. One day they will find that “the door is shut.” It’s all so very sad.

I pray that none of the readers of this article would be counted among the “foolish virgins” and that the door to heaven is not shut to them. Make sure your heart is truly right with God, that you are truly born again and believe God’s Word.

In Genesis 7, we read the account of Noah and his family (eight people total) who went through the door of the Ark to be saved from a watery judgment. These were the only people living in the pre-Flood world whose hearts were right with God and who believed God’s promises.

Noah is also mentioned in the New Testament. In 2 Peter 2, the apostle Peter warns us about false prophets in the church—leaders who profess that their hearts are committed to the true God, but are really false teachers. Outwardly they were prophets/teachers, but inwardly, their hearts were not right.

In verse 5, Peter describes Noah as a “preacher of righteousness” and someone who was saved. But Peter points out that false teachers cannot expect to escape divine vengeance. Just as God shut the door when Noah and his family were on the Ark, and just as those whose hearts were not right with God suffered the judgment of the Flood, false teachers will not be on board today’s Ark of Salvation, Jesus Christ, when He comes again (this time in judgment). The door will be shut to them.

At Answers in Genesis, we are burdened to proclaim the gospel of Christ and the fact that only those who go through the open door can be saved.

I believe there is a great danger today in the church: an increasing number of “Christian” academics and pastors who may intellectually believe in God, but inwardly (and only God knows), their hearts may not be right with God—like the “foolish virgins.” And certainly, only Jesus, who is the Word, can ultimately judge their hearts (Hebrews 4:12).

Now I am not saying that if a person denies the creation account of origins and believes in evolution/millions of years, he or she can’t be truly saved. After all, God’s Word simply states that “if you confess with your mouth the Lord Jesus and believe in your heart that God has raised Him from the dead, you will be saved” (Romans 10:9).

Please pray for these academics and pastors in Christendom who are leading so many people astray. Pray that the Lord will convict them to make their hearts right with God while the “door” (the Lord Jesus) is still open. Remember, “Not everyone who says to Me, ‘Lord, Lord,’ shall enter the kingdom of heaven, but he who does the will of My Father in heaven” (Matthew 7:21).