One of the biggest challenges before us is not so much countering the teaching of evolution and millions of years in the secular culture—but dealing with this wrong teaching in the church!

Do you have questions about the Tower of Babel? Explore our new DVD.

When I was speaking at the highly memorable All-Asian Creation Conference in Malaysia in November,1 I wrote a blog entitled “Worldwide Epidemic Threatens Church.”

Here is basically what I said:

There were 20 countries represented at this conference, and I have now heard from people from nearly all of those nations pleading for a creation conference in their country. They all have said to me something like, “most of the pastors—Christian leaders—seminary professors—believe in evolution and millions of years.”

Friends, disbelief in the book of Genesis is a worldwide epidemic. Satan has used millions of years and evolution to permeate the church around the world and undermine the authority of Scripture. What a mission field we have to reach the “shepherds,” the Christian teachers and leaders and pastors, around the world to call them out of compromise and back to the authority of the Word of God.

This one conference has made me realize even more than ever how the pagan religion of millions of years and evolution has so permeated the church around the world! What a mess! And sadly, countries like the USA and England have sent missionaries around the world teaching this damaging “compromise message” because they were trained in compromised colleges and seminaries.

This makes me more burdened than ever to challenge church leaders who, whether wittingly or unwittingly, are allowing for or actively teaching compromise positions in regard to the book of Genesis.

Just before I flew to Malaysia, a Christian academic from the UK had come to Malaysia to give presentations. But he was there to encourage the church to believe in evolution and millions of years. This speaker was promoting the work of evolutionist Dr. Francis Collins, who founded the theologically liberal BioLogos Foundation. 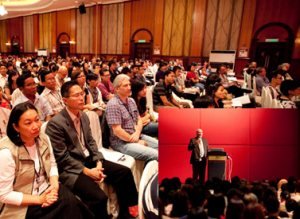 About 1,000 church leaders and others gathered in Malaysia to hear Ken Ham and other speakers talk about the epidemic of biblical compromise in the worldwide church.

Thankfully, biblical creation ministries have advanced around the world. Organizations like AiG have been able to produce and distribute a plethora of resources (many are being translated into other languages) to teach Christians how to defend the Christian faith.

At the same time, we have seen a corresponding increase in books and other resources by leaders in the church who teach that evolution and millions of years are true and supposedly compatible with the Bible. And they are sending out their compromising “missionaries” around the world in an attempt to get the church not to believe in a literal Genesis.

As we have stated over and over again for 18 years now, such compromise undermines biblical authority, and it is a major reason there has been such a catastrophic collapse of the Christian worldview in our Western nations.

As part of our work to help stop this epidemic of compromise related to the inerrancy of Scripture, AiG staff regularly attend the Evangelical Theological Society (ETS) annual conference. This is a gathering of largely conservative evangelical scholars/Christian leaders who present and discuss papers on various topics.

From our experience, probably the majority of Christians who attend the ETS meeting would either allow for or insist on believing in millions of years and in reinterpreting Genesis accordingly—not because the Bible teaches an old age, but because they have been indoctrinated by academics to accept millions of years (or they will be seen as “anti-scientific” or “anti-academic”).

Yes, biblical compromise beginning in Genesis is an epidemic. It’s now a global epidemic that is undermining biblical inerrancy and the authority of Scripture.

As we look forward to what God has for AiG this year, we recognize that one of the biggest challenges before us is not so much countering the teaching of evolution and millions of years in the secular culture—but dealing with this wrong teaching in the church!

The church needs to wake up to the fact that millions of years/evolution is really the pagan religion of this age. Christians need to realize that secular scientists reject God’s Word. In fact, to compromise and make an idol out of millions of years/evolution—as secular scientists and many church academics have done—is no different than what the Israelites did when they compromised with the idol-worshipping Canaanite religion of their age.

Do not be unequally yoked together with unbelievers. For what fellowship has righteousness with lawlessness? And what communion has light with darkness? And what accord has Christ with Belial? Or what part has a believer with an unbeliever? And what agreement has the temple of God with idols? For you are the temple of the living God.

As God has said: “I will dwell in them And walk among them. I will be their God, And they shall be My people.” Therefore “Come out from among them And be separate, says the Lord. Do not touch what is unclean, And I will receive you.”