Seed Planting at the State Fair

You may have to look harder these days, but the agricultural roots of state fairs still exist. Tractor pulls, livestock judging, and 4-H competitions continue to play a big part of this annual event. For Roger Bishop, the state fair was the perfect soil where he could plant seeds for an eternal harvest. 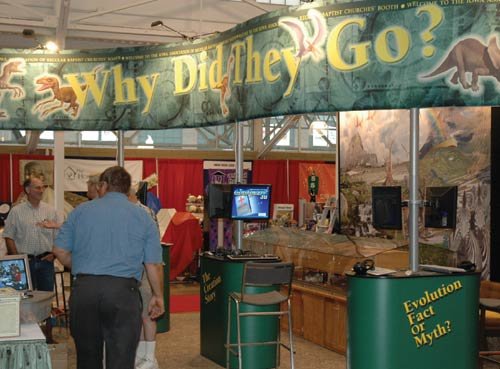 State fairs offer fertile soil for evangelism. Creation evangelist Roger Bishop discovered this when he and the association of churches to which he belongs sponsored a booth devoted to defending God’s Truth about creation and Noah’s Flood.

Every year since 2001, Roger and the association of churches to which he  belongs sponsor a booth at the Iowa State Fair, which greets nearly 1 million people over 11 days.

The most unique features of this evangelistic booth have included a 9-foot plastic, puzzle-like dinosaur, a 9-foot-long model of Noah’s Ark, and two trains that circle underneath the Ark.

Over the years they expanded the booth to also include banners with high-end graphics and computer monitors that run a creation-based game. Many conversations have been generated as a result of handing out thousands of pieces of literature, including flood cards and the booklet Was There Really a Noah’s Ark and Flood?

Through this unique outreach, many people have learned that Jesus Christ is the “Ark of Salvation.”