Lessons Learned from a Fossil

For 24 years students in Bill Minnich’s music class memorized more than notes and scales; they learned about fossilization and paleontology. 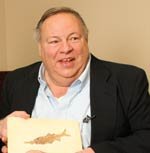 After owning the rare fossil of a fish eating a fish (top), valued at over $25,000, Bill Minnich felt convicted to donate the fossil to the Creation Museum. Now hundreds of thousands of people every year will see the undeniable evidence of Noah’s global Flood.

For 24 years students in Bill Minnich’s music class memorized more than notes and scales; they learned about fossilization and paleontology. A part-time mineral and fossil dealer, Bill used his full-time platform as a public school music teacher to evangelize his students. And he did so without receiving a single complaint.

While teaching the musical theme to the movie Jurassic Park, Bill thought that the timing was perfect to bring out his trilobites. He told the students that a trilobite was more than just a fossil; it was a “window to a world that once was,” he told them.

Bill also discussed the Bible’s account of Noah’s Flood, which, for many of his New York City students, may have been the only time they learned biblical truths.

In 1999, Mr. Minnich retired after 35 years of teaching, but his fossils had another lesson to teach. However, Bill was the one who needed to learn the lesson this time.

For 35 years Bill held onto an extremely rare fossil of a fish eating a fish, which he calls one of the finest examples of “bam” (his description for rapid burial) that he’s ever seen. But knowing such a fossil’s potential impact, Bill was convicted that he should donate it to the Creation Museum, where thousands of people every day could see the undeniable evidence of a global Flood.

“What I had hoarded was never mine to begin with; it was the Lord’s. I only watched over it,” says Bill.

Also see Amazing Fossils on Display at the Creation Museum.