What Carved the Grand Canyon?

Because its northern rim, which includes the Kaibab Plateau through which the canyon is cut, is at a high elevation, the Colorado River as we know it today could not have carved the Grand Canyon.

A couple of weeks ago we discussed how some scientists still suggest a flood of epic proportions may have carved the enormous Black Sea basin to the proportions we see it today, even though the geology of the region fails to provide evidence for such a flood.

But what about the Grand Canyon? Because its northern rim, which includes the Kaibab Plateau through which the canyon is cut, is at a high elevation, the Colorado River as we know it today could not have carved the Grand Canyon. (After all, water doesn’t flow uphill, not even if allowed to try it for millions of years!) The Grand Canyon was carved through—not around—the uplifted plateau. However, even secular geologists do not agree on when or how the canyon was formed.1

Some geologists seek the canyon’s source in an ancestral, yet-to-be-found river, perhaps in Utah. However, the canyon lacks the sort of erosion debris and geologic formations that would be present if it had formed through a slow process over millions of years, so some geologists believe a catastrophic flood formed it. Some of these—including geologists who accept the biblical history of the global Flood—maintain the Grand Canyon was carved by a sudden release of water dammed up behind the Kaibab uplift (aka Kaibab Upwarp). Creationist geologists believe this water was trapped in the aftermath of the global Flood. 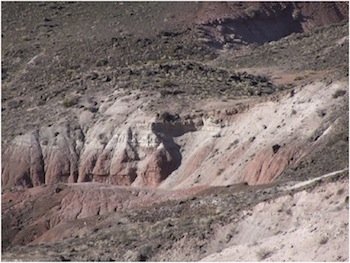 The Bidahochi Formation, the sediment remaining from an ancient lakebed conventionally considered to be “only” 8 million years old, rests on the pink mudstone of the Chinle Formation, conventionally dated at 225 million years. This apparent “missing millions of years” is an example of an unconformity. Biblical Flood geology also makes sense of this enigma. Image credit: National Park Service and LiveScience.com through news.yahoo.com. 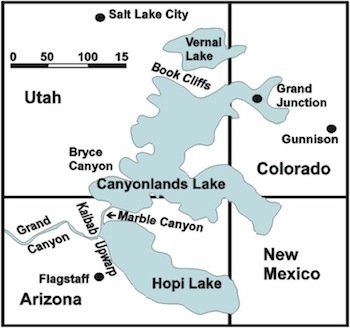 A study in December’s issue of Geosphere attempts to refute the idea that the Grand Canyon was carved through an uplifted plateau by trapped lakewater breaking through the high Kaibab Upwarp. The Geosphere study focuses on an analysis of the sedimentary remains of Hopi Lake. The author ignores that which biblical creationist geologists believe held most of the water that catastrophically broke free to carve the canyon in the years after the global Flood. This map shows the locations of three former lakes on the Colorado Plateau. The lakes were likely formed in the aftermath of the global Flood as some of the water running off of the uplifted plateau was trapped behind naturally forming dams. See chapter 18 of New Answers Book 3 for a more complete discussion. Image credit: page 103 of Grand Canyon: Monument to Catastrophe, edited by Dr. Steven Austin (Santee, California: Institute for Creation Research, 1994) through www.creationinthecrossfire.org.

William Dickinson, a University of Arizona geology professor, wishes to discredit the flood-origin theory of the Grand Canyon’s origins. “I don't think it's a valid story, and my main purpose is to dismantle it,” he says, referring to his latest study, published December 13, 2012, in Geosphere. Dickinson reports that analysis of the sediment remaining from Lake Hopi (aka Lake Bidahochi) shows it was the size of Utah’s Great Salt Lake but was too shallow to have produced sufficient floodwater to have breeched the ridge and carved the canyon. He says, “There's no evidence from sedimentology that it was ever a deep lake.”

Geologist Richard Young adds that the sediment remaining from Lake Hopi also indicates the lake is too young to have carved the canyon. He says, “There's no way the lake could have been there for 20 [million] or 10 million years.”

While Dickinson is now certain that the flood-from-a-lake theory is now laid to rest, he isn’t prepared to say where the canyon-carving-river he posits was. Describing the direction he’d like to see research move in, he explains, “One of the hardest things to hindcast is to know how big a river you're looking for in Grand Canyon country. What was the river like up in Utah? I hope that if people would just abandon the Hopi Lake spillover game, their thoughts would lead them on to worrying about Utah.”

So has the Flood geology model, which explains the geology of the Grand Canyon, just taken a dive? No. Dickinson only considered Lake Hopi, which—based on the geology of the region—was not the only source of bottled-up post-Flood lakewater for canyon-carving. Biblical Flood geologists implicate the much larger Canyonlands Lake as the main catastrophic agent that broke through the Kaibab uplift and sliced through the barely hardened Flood sediments of the Colorado Plateau. Creationist geologist Dr. Andrew Snelling of Answers in Genesis explains, “What Dickinson conveniently forgets is that the Flood geologists don’t rely on Lake Bidahochi for carving the Canyon. He conveniently ignores the very much bigger Canyonlands Lake.”

The dating of Hopi Lake sediments that Young mentions are based on unverifiable assumptions, but based on biblical history the lakewaters don’t need to have been there for 10-20 million years to have had a minor role in carving the canyon. If these sediments were the result of subsequent deposits in lakewaters left by the global Flood, they are in fact less than 4,500 years old.

Furthermore, as the journalist from “Our Amazing Planet” mentions in her article, the sediments of the Bidahochi Formation rest atop a great unconformity, “a missing period of geologic time, with the 8-million-year-old lake silt blanketing the 225-million-year-old pink mudstone that forms the Painted Desert.” Biblical flood geologists don’t need to explain these “missing millions of years.”

The formation of the Grand Canyon defies the explanations offered by evolutionary geologists. It was carved through a plateau that had already been uplifted by some sort of geologic process. If this plateau was lifted up at the end of the global Flood, then floodwaters rapidly draining off of it scoured away what secular geologists believe to be millions of years’ worth of sediment. Some floodwater was trapped to form a huge lake system. During the post-Flood years, water levels eventually grew and breached the natural dams to carve the canyon, a monument to catastrophe. Dickinson’s study does not lay this scenario to rest.