Mica, Mica in the Sand, Tell Us Something Really Grand!

Sometimes skeptical scientists just need to listen to what the rocks are saying.

My graduate school professor, Dr. Steve Austin, was a serious field geologist. But periodically, his childlike delight in exploring God’s creation shone through. He taught us to let the rocks and the earth “speak to us,” as Job 12:8 (NKJV) said several millennia ago. While on field trips, he would ask us to consider how large boulders ended up on mountain slopes of the Anza Borrego Desert. He would say—and I’m not kidding—“Boulder, boulder on the ground, tell us something really profound!”

I learned well from my professor and have come to apply his rhyme not only to boulders but also to small sand grains. 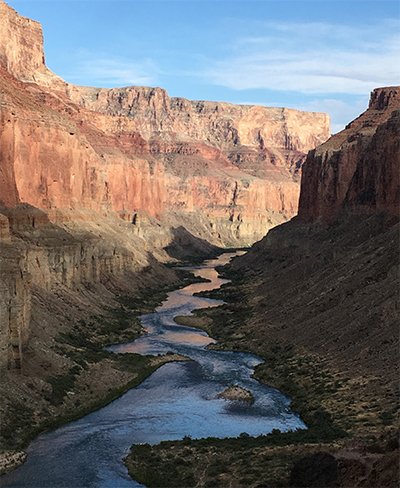 For some time now, I have been studying a famous layer of yellow rock known as the Coconino Sandstone found in the walls of Grand Canyon. Other creationists and I have devoted many years to this sandstone because most other geologists interpret the sandstone as sand dunes that formed in an ancient desert some 275 million years ago and later fossilized (hardened into rock). How different from the view that Noah’s watery flood laid down these layers quickly around 4,300 years ago!

Conventional geologists know the Coconino is a problem for those of us who trust the accuracy of the Noah’s flood account described in Genesis 6–9. They have used the Coconino to try to make creationists look foolish—because you cannot have a desert in the middle of a global flood.

The answer requires arduous field work and looking closer in the laboratory—a lot closer—under the microscope. For the answer is granular, literally looking at sand grains.

Sandstone is made up of sand grains cemented together. As my team started to study the Coconino, our goal was to observe the sandstone in as many locations as we could. During the process, we collected many rock samples so we could examine the details under the microscope. We also visited many modern sand dunes in deserts so we could examine their windblown processes and sand grains carefully and then compare the two.

We noticed almost right away one astonishing difference between the Coconino sand and the sand grains of modern sand dunes. We weren’t surprised to find that by far the primary mineral is quartz, because quartz is chemically resistant and hard (7 on a scale of 10). It is the same mineral used to make window glass. About 90% of the Coconino sand grains are also composed of quartz. However, Coconino has another common mineral that is not so common in desert sand.

In almost every one of the 400 microscope slides of Coconino that we observed, we found the mineral muscovite. What’s that? Well, it is a silver-colored type of mica that is extremely soft (2.5 on a scale of 10)—about the same hardness as your fingernail. All types of mica are flexible and can peel apart into paper-thin sheets, thin enough so that light can easily pass through. (We carefully looked for micas in our desert sand dune samples, but we found none except for when the sand was in close proximity to a mica source like granite.)

As we thought about our observations, we realized that mica is so soft that it probably was chewed up quickly in desert settings as grains of quartz violently collided during strong winds. But how could we test this?

Pictured are two examples of microscope slides collected from the Coconino Sandstone in the Grand Canyon region. Delicate mica flakes (arrows) couldn’t survive if the sand were deposited in windblown deserts. The surrounding quartz grains (some labeled Q) would chew them up.

But mica can survive underwater because water cushions the collisions, as would have occurred during Noah’s flood.

Also note the jagged nature and the varied sizes of the quartz sand grains, characteristics of water deposits. 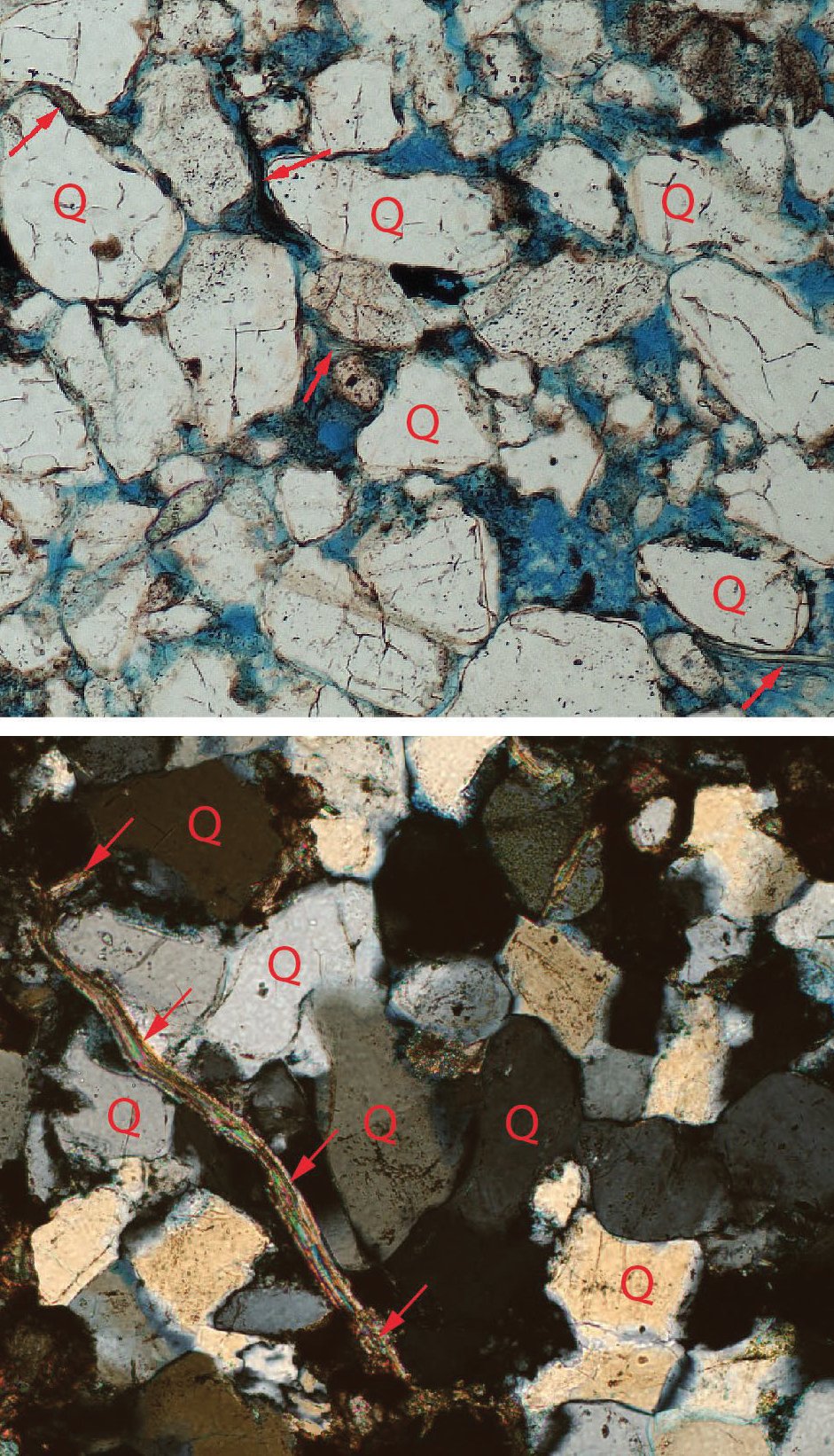 The upper image was photographed with polarized light and the bottom image with cross-polarized light, causing the different colors.

Alex, a Cedarville University geology student who was on the team, came up with an ingenious experiment. He attached a model airplane motor and propeller to a large pickle jar, with the blade sticking into the jar. He placed a small amount of muscovite-rich sand into the jar. He then adjusted the speed of the propeller so the sand moved slowly around the bottom of the jar similar to a small migrating sand dune.

He collected small amounts of the sand at regular intervals to see what was happening to the mica. We expected that the experiment might have to run a month or longer. But to our surprise, the mica quickly disappeared after four days.

A second experiment was devised to test the durability of mica when transported by water. Another Cedarville geology student used the same sand source and pickle jar that Alex had used. This time water was added, and the jar was rotated sideways on a rock tumbler. Again, we expected we might have to run the experiment for a month. But visible mica flakes could still be seen tumbling around in the sand after a year of continuous motion.

We decided that we could end our experiment at that time. By the way, the research was published in the journal Aeolian Research, which specializes in research regarding sand dunes and their processes.

The experiments confirmed that fragile mica grains are chewed up quickly in desert environments. However, if the quartz-mica mix is submerged, water cushions the collisions.

The results of our experiments are consistent with other real-world observations, which have been published in journals like Sedimentology and Earth-Science Reviews. Researchers have found that mica grains are quite abundant on the beaches along the coast of the African nation of Namibia. The ocean has carried this sand northward along the coast for hundreds of miles, but the mica survived the entire way despite the chaotic surf.

But guess what? Strong winds have picked up some of the sand and carried it inland to the massive dunes of the Namibian Desert. Mica cannot be found in these sand dunes, even short distances away from the beach. The researchers surmised that mica either gets quickly broken down or wafted away by the wind.

Now, back to the Coconino. If it were a vast desert deposit, as purported by secular geology, then why is there so much mica? This soft, shiny, inconspicuous mineral is trying to tell us something really grand. Instead of being an embarrassment to the creation geologist, the Coconino Sandstone is a powerful testimony to formation of this rock under the waters of Noah’s flood.

Mica, mica in the sand, tell us something really grand!

Formation of the Coconino Sandstone—Water Not Wind

The massive sedimentary strata known as the Coconino Sandstone in the Grand Canyon is one of the most common formations used as evidence against the Genesis flood. Secular geologists say it was formed in a desert over millions of years. The debate is whether its fossilized sand dunes were formed by wind or under water. Features would be very different under these two conditions.

Gentle Slopes. In modern windblown deserts, dry sand avalanches at a steep angle of about 34°. The Coconino does not have steep angles—the average is only about 20°.

Different Grain Sizes. Sand grains in desert dunes are usually very similar in size, or well sorted, because the wind carries only select sizes. However, Coconino sand grains are many different sizes, moderately to poorly sorted. 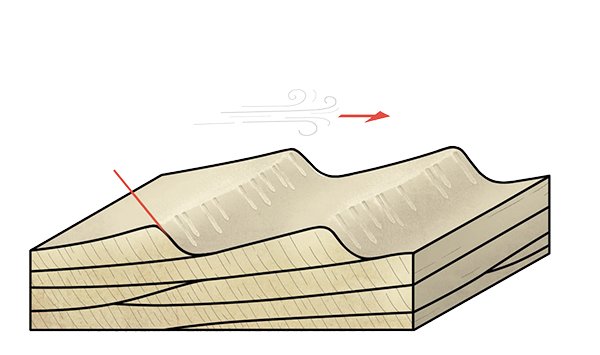 Winds in modern deserts blow sand grains into large piles called sand dunes. As sand grains collide with each other, the grains become rounded and get sorted by size. The piles of sand eventually collapse (avalanche), forming steep deposits called cross-beds. The angle is usually around 34°. 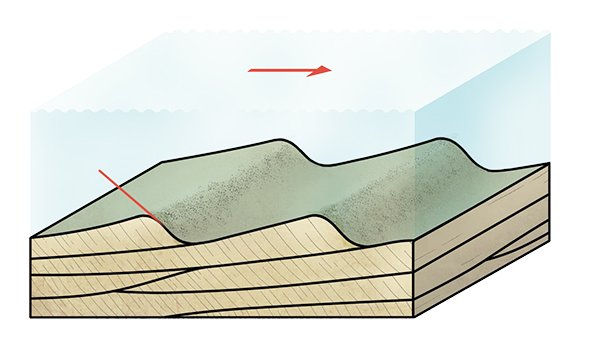 Under the ocean, strong water currents can leave piles of sand grains in large dunes. However, because water can cushion sand grain collisions better than air, the grains do not become rounded and a variety of sand sizes get mixed together. Water currents cause the piles of sand to collapse at lower angles than those found in deserts, forming gentler cross-beds with angles of about 20°.”

Dr. John Whitmore has been studying the Coconino Sandstone for over 20 years and is senior professor of geology at Cedarville University, where he has been teaching since 1991. He has written numerous articles and is coauthor of The Heavens and the Earth, a college-level earth science textbook.
Previous Article The Secondary Language That Leaves Evolutionists Speechless