The current edition of World magazine includes an article by the editor-in-chief encouraging Christians to rethink how they view Creation and the Flood.

With astounding photos and expert analysis from geologists, theologians, historians, and others, Grand Canyon: A Different View provides a biblical perspective on this magnificent canyon.

In the cover story for the current edition of World magazine (September 11 issue), the editor-in-chief examines the question of the historicity of the book of Genesis using the Grand Canyon as the backdrop. (World magazine has been dubbed “the Christian version of Time magazine.”) 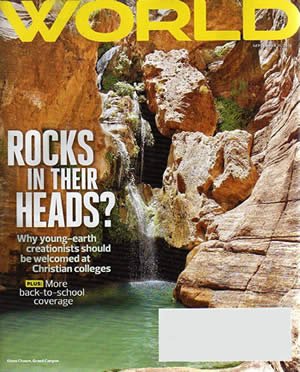 With a headline on the cover that declares “Rocks in Their Heads?” (we thankfully note the rhetorical question-mark in referring to young-earth creationism), the lengthy article by Marvin Olasky was largely composed as he rode the rapids of the Colorado River that cuts through the Grand Canyon. He participated in an Answers in Genesis/Canyon Ministries’ one-week raft trip.

As he chronicled his journey, Olasky also offered comments on why Christian colleges should consider presenting a more balanced approach to the teaching of the book of Genesis, specifically its creation and Flood accounts (and when these events occurred in history). You see, the majority of Christian college/seminary professors teach an old age for the earth. Many of them also promote evolution over millions of years as the real explanation for the origins of life and living things—with God’s assistance along the way. Young-earth creation and a global Flood are not taught as viable views except in a minority of Bible colleges and seminaries. If they are mentioned at all in the other Christian institutions, they are often dismissed and sometimes mocked.

On Olasky’s raft were Answers in Genesis geologist Dr. Andrew Snelling (who has been into the Canyon more than twenty times and is the host of a new audio tour of the Grand Canyon) and historian of science Dr. Terry Mortenson. AiG friend, Tom Vail of Canyon Ministries, who navigated the rapids for this group, also provided some instruction regarding the Canyon’s formation. These three men explained to Olasky and the others on the trip that the Canyon’s formation came rather rapidly within the context of the after-effects of Noah’s Flood about 4,350 years ago, and not over millions of years.

In his article, Olasky summarized the arguments that young-earth creationists submit for a not-so-old Canyon:

For more evidence of the Canyon’s young history, its rapid formation, and its relation to the Flood of Noah’s time, see Vail’s article.

Olasky will be writing a follow-up piece for World about Christians who believe in an old earth and deny a global Flood. We believe Olasky will ask them the difficult question: how there could have been millions of years of struggle and death—as seen in the fossil layers in places like the Grand Canyon—before the Fall of Adam?

You may read the World article by Olasky on their website.

Previously on our website, we discussed Olasky's article on whether Christians can be more effective in sharing their faith if they tried to reconcile a belief in evolution with Genesis.

We are grateful that, although the names Answers in Genesis and Canyon Ministries were not mentioned in the World article (AiG was cited in an associated article), the piece did draw attention to the AiG research of Drs. Snelling and Mortenson that demonstrates the compatibility of good science with the book of Genesis.

You may find out more on the AiG website about next year’s raft trips that Tom Vail will be organizing, including those that will feature AiG staff (be aware that most of the raft trips are filled months ahead of their launchings).

AiG President Ken Ham has been on one of the shorter raft trips through the Grand Canyon. He remarked recently: “When I went on one of Tom Vail’s raft trips, not only was I struck by the awesome beauty of this incredible Canyon, but I was even more awestruck by the remarkable testimony that it offers to the reliability of the Bible’s account of a worldwide Flood.”

For information on AiG’s own Christian worldview magazine, see  the Answers magazine.