Contrary to conventional wisdom, crocodilians not only can digest fruit but seem to commonly and intentionally consume it.

Contrary to conventional wisdom, crocodilians not only can digest fruit but seem to commonly and intentionally consume it. A review of crocodilian frugivory, published in the print edition of the Journal of Zoology last month, found evidence that nearly three-quarters1 of the crocodilian species for which sufficient data is available eat fruit frequently. In fact, due to their far-ranging habits, crocodilians may join other fruit-eating animals as significant seed dispersal agents. Crocodiles, alligators, and caimans do not chew their food, so seeds can pass right through to populate the planet with more plants.

Alligators in captivity forage for a variety of fruit. Crocodilian dietary choices in the wild, however, have remained a mystery. Crocodilians—with their “obligate carnivore” status and reputation for aggressive carnivorous behavior—have never been considered frugivorous.

How’d That Get In There?

Dissection of alligators and crocodiles has produced many examples of fruit seeds and nuts in their stomachs. Of course, that did not mean that the animals intentionally ate fruit. They could have scooped up fruit or seeds with prey, or their prey could have recently eaten fruit. Some suggest that crocodilians swallow seeds to help grind other food in their stomachs. The authors of the recent dietary review had to survey a great deal of literature and other data to collect sufficient information to support a case for common fruit consumption among crocodiles, caimans, and alligators.

While the bulk of dietary data on crocodilians comes from postmortem examination of stomach contents and observation of captive animals, the authors of the review found that “a scattering of reports indicate that deliberate frugivory occurs among wild crocodilians.”2 American alligators are known to raid automatic wildlife feeding stations, not to intercept other visitors, but to enjoy the corn.3 There are even Central and South American fruits named “alligator pear” and “alligator apple” due to their reputed popularity with caimans. While accidental fruit ingestion doubtless occurs, some crocodiles, alligators, and caimans not only deliberately eat fruit but do so in large quantities. Some dissected animals have even had such a huge number of seeds in their stomachs that they had to have eaten hundreds of pieces of fruit—berry seeds corresponding to 945 berries in the case of one alligator and a peck (9 liters) of cotton seeds in the stomach of another—suggesting deliberate consumption.4 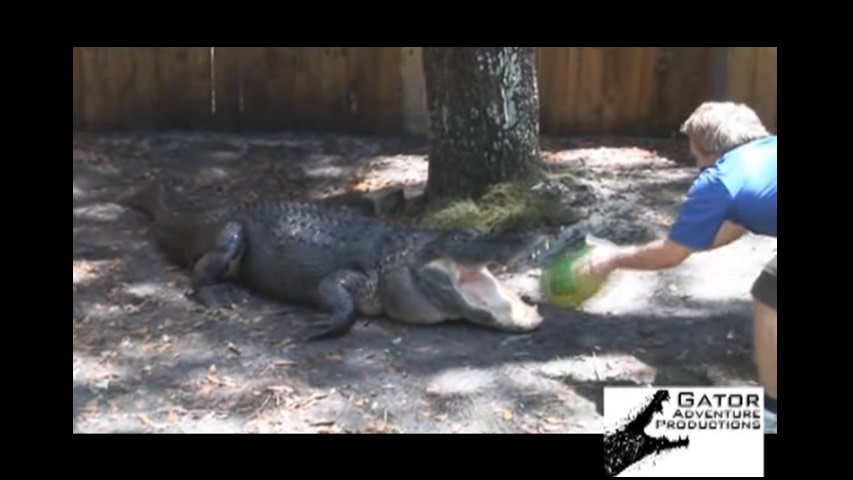 This captive alligator relishes smashing and eating watermelons. Such behavior was once thought to be anomalous, but it appears that many alligators, caimans, and crocodiles regularly eat fruit in the wild. Image by Gator Productions, via The Conversation.5

One reason that scientists have pretty much assumed fruit-eating among crocodiles was an aberration involves assumptions about carnivory. While the survival advantage of snapping up a mammal or bird seems obvious, as Brian Switek observed in National Geographic, “Why crocodylians are eating fruits and seeds, as well as how they’re detecting the plants, is unclear. With the exception of a fruit hitting the water and the crocodylian snapping in reflex, the attraction of fruits and seeds to the carnivores is a mystery.”6 Some have suggested “floating fruits might be consumed when mistaken for aquatic insects by crocodilians.”7 But neither such behavior nor the consumption of fruit-eating prey can explain vast quantities of seeds in the stomachs of some crocodilians. After reviewing all available data, the authors conclude that fruit consumption among these animals is common and deliberate. What sensory cues—color, smell, shape, taste, etc.—attract them to certain fruits remains a mystery.8

One might even think these animals were designed to be able to derive nutritional value from fruits and veggies.

Furthermore, crocodilian digestive systems, contrary to conventional wisdom, can handle fruits and veggies just fine. The authors report that though early research suggested these animals could not metabolize dietary carbohydrates, more recent research has shown that such carbohydrates have as much nutritional value for crocodilians as they do for us. Carbohydrate supplements to their high-protein diets improved their “food conversion efficiency and growth.”9 Crocodilians, it turns out, also have the necessary pancreatic and intestinal digestive enzymes to deal with carbohydrates. The authors conclude, “Thus, there is no a priori reason for assuming crocodilians consume fruit for reasons other than nutrition. While much remains to be learned about how crocodilians process carbohydrates and other plant-based nutrients, collectively, these studies suggest that frugivory is likely to yield nutritional rewards for crocodilians.”10

Indeed, one might even think these animals were designed to be able to derive nutritional value from fruits and veggies. Variation within created kinds of animals has obviously occurred since God originally created all kinds of animals about 6,000 years ago. Sometimes that variation has resulted in the loss of certain abilities, a good example being the inability of many species of mosquito females to reproduce without ingesting blood. However, it really should be no surprise to learn that crocodilians not only can eat fruit but are perfectly equipped to obtain nutritional value from it and enhance the efficacy of their overall nutrition by eating such a “balanced” diet. 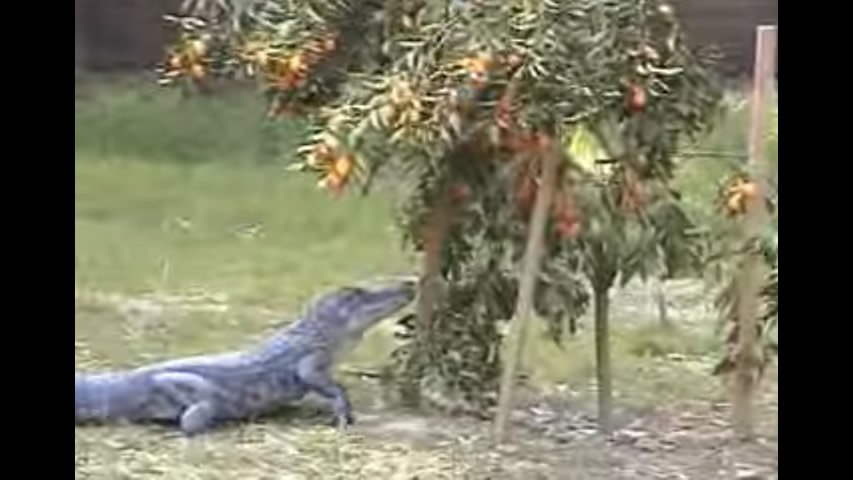 This alligator is helping himself to kumquats. Contrary to what has been commonly thought, many crocodilians in the wild deliberately and commonly also consume fruit. Image by Gator Productions, via The Conversation.11

God created all kinds of animals, but He did not create them to be carnivorous. God’s Word tells us that He designed all to subsist on plants for food:

And God said, “See, I have given you every herb that yields seed which is on the face of all the earth, and every tree whose fruit yields seed; to you it shall be for food. Also, to every beast of the earth, to every bird of the air, and to everything that creeps on the earth, in which there is life, I have given every green herb for food”; and it was so. Then God saw everything that He had made, and indeed it was very good. So the evening and the morning were the sixth day. (Genesis 1:29–31)

God our Creator pronounced His creation, on the sixth day of the world’s existence, to be “very good.” Death entered God’s perfect creation as a result of Adam and Eve’s rebellion against their Creator. Since then the world over which God originally gave man dominion has groaned under the curse of suffering and death (Romans 5:12-19; Romans 8:20-21). The very first animal death provided clothing of skin for Adam and Eve and served as a sacrifice demonstrating that the penalty for sin involves blood and death.

Because suffering and death entered man’s world, human beings see examples of the devastating consequences of sin all around us. The sight of an alligator picking its favorite fruit or smashing a watermelon with its sharp teeth and powerful jaws should conversely be a reminder of the perfect world that God made. Rightly understanding the reason we have carnivory—the reason that crocodilians will use their sharp teeth on animals as well as kumquats—should remind us of the sin that started all this suffering and the Savior who entered the world to solve our sin problem and through whose grace the world will someday be made over as a “new heaven and a new earth” without the curse of sin or death.