Does ancient sparkling water hold the keys to life’s origins?

Scientists report they have analyzed the oldest isolated water on earth. The sparkling mineral water has been bubbling up from bore holes and fractures in a copper and zinc mine near Timmins, Ontario, since the 1880s,1 but it only recently occurred to anyone to see how old the water might be. The researchers believe the water, trapped in tiny fractures in sulfide deposits without connections to other cracks, has had no direct or indirect contact with water exposed to earth’s atmosphere or the sun for 1.5 to 2.64 billion years.2 Because the water contains methane and hydrogen, they believe it could hold evolutionary clues about the original life on Earth or even Mars.

Geochemist Chris Ballentine and colleagues collected the water without exposing it to the air and analyzed it. He says, “We were expecting these fluids to be possibly tens, perhaps even hundreds of millions of years of age.”3 But their interpretations of the relative abundance of noble gas isotopes suggests even greater antiquity, 1.5 billion years at a minimum. Coauthor Barbara Sherwood Lollar says, “These are the oldest waters that have ever been identified. The Canadian Shield is some of the oldest rocks on Earth. These are billions of years old. And what we've shown is despite that, these fractures are still releasing water that are full of energy that could support life. We don't know yet if there's life in this, but what we've been able to show is it is habitable, meaning [having the] potential to support life because of the energy that's there.” 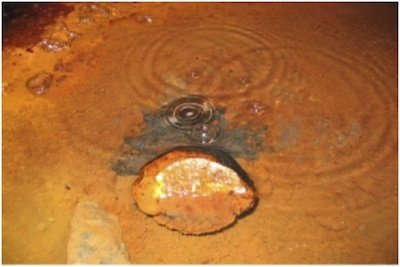 Researchers believe water percolating up though the floor of a mine over two miles below the Canadian Shield is the oldest isolated water on earth. Image by J. Telling, via www.nature.com.

Some microbes are able to subsist without oxygen and sunlight. Some of these have been found deep in a South African gold mine supposed to be millions, though not billions, of years old. Such chemoautotrophic microbes live in the toxic environment of hydrothermal vents deep beneath the oceans, too. Therefore the researchers believe that non-oxygen-dependent microbes may have evolved and been preserved in this sort of isolated “deep water” environment. Lollar says, “It's loaded with dissolved chemistry that actually can support life. We're understanding that there is deep life, that it's run by a different kind of energy, often. What we're really interested in now is finding out more about the nature of that kind of life. . . . It will help us understand how much of our planet is actually habitable. Are we really just a thin film of life on the surface? Or how prevalent is this subsurface life and what percentage of the world's overall biomass is down there?”

The assertion that the water bubbling up beneath the mine is the oldest on earth and over a billion years old is based on the usual unverifiable worldview-based assumptions.

The researchers believe the water they’ve found could give them a snapshot of earth before it developed an oxygenated atmosphere. Ballentine indicates the discovery may be relevant to evolutionary biology because the ancient water isolated in these small interconnecting fractures may have provided “secluded biomes, ecosystems, in which life, you can speculate, might have even originated,” he says, adding, “There is no reason to think the same interconnected fluids systems do not exist there.” Lollar explains, “Much of the Mars crust is similar to our ancient (Canadian Shield). It's also billions of years old crystalline rock, with a similar geography to the Timmins site. It's reasonable to think that same process could be going on today in the depths of Mars.” The researchers have not yet found any evidence of microbial life in their samples but plan to look. The assertion that the water bubbling up beneath the mine is the oldest on earth and over a billion years old is based on the usual unverifiable worldview-based assumptions on which the interpretations of radiometric data is based, isotopes of noble gases (like xenon, argon, helium, and neon) notwithstanding. Answers in Genesis geologist Dr. Andrew Snelling has reviewed the reported research and explains:

Their whole argument depends on two key issues, namely, the radiometric age of the host rocks the water came out of, and the excess 129Xe in the water above the level normal in air, which is believed to have been derived from radioactive decay of 129I. The measured 124,126, 128Xe levels are compatible with the assumed values in an atmosphere that evolved over billions of years. So it all boils down to the reliability of radiometric dating and the assumptions on which it is based, including the assumption that radioactive decay rates, including that of 129I, have always been constant at today’s measured rates.

The notion that earth once had a non-oxygen atmosphere is likewise an unproven assumption needed to create an imaginary ancient environment in which chemicals could make evolutionary progress toward becoming alive without getting oxidized (and thereby destroyed). The various assumptions on which radiometric dating methods are based are explained further at the links listed below. Dr. Snelling also notes the extreme inconsistency of the reported “dates” assigned to the water. He says:

Their results are inconsistent. They report the average groundwater residence times based on radiometric dating as

These represent error margins of between 47 and 56%!

Such error margins would be quite unacceptable for an engineer designing a bridge, but they make headlines when they are put forth in support of evolutionary dogma. It is impossible to know whether the water in these rocks really dates from the time of Creation or not. Dr. Snelling explains:

As for the likelihood that this water has been isolated from the atmosphere and sun since ancient times, their argument is too bound up in assumptions related to radioactive decay rates. Since some of the host rocks are volcanic in origin, and they have subsequently suffered from low grade metamorphism, one could equally argue that the heat and pressures should have squeezed out the original water, so what’s there now could have been introduced much later. The host rocks are likely related to the late stages of the effects of the upheaval to make the dry land on Day 3 of Creation Week (Genesis 1:9–10) and the resulting water movements during the last part of the Creation Week, and water could have then been reintroduced to them when the Flood began. Either way this water is no older than 6,000 or so years.

If microbes like those that thrive in the dark toxic chemicals of hydrothermal vents are found in the water, they will not be evidence for abiogenesis but only examples of earth’s biodiversity. No biological research has ever demonstrated that life emerged through random natural processes from non-living chemicals. Despite claims to the contrary, evolutionary efforts to explain the origin of life without God are worldview-based, not evidence-based. Likewise, if evidence of microbial life is ever found on Mars, it will not prove evolution generated life from lifelessness nor would it undermine the historical fact that God created all life and the entire universe about 6,000 years ago.

Creationists are not shocked to find exotic life-forms thriving in unusual places. Even if this water has truly been isolated from the atmosphere and sunlight for a long time, and even if microbes are found in it, that would not demonstrate that evolution happened or that the microbes are descendants of a primitive life form. It would only be another example of microbial biodiversity. When God created the earth and filled it with living things, He created fully functional creatures suited for many environments and with the capacity to adapt to others. The “extremophiles” may well have occupied a crucial ecological niche from the beginning.

Previous Article Is the Dawn of the Early Bird Too Good To Be True? Next Article Cousin Achilles: The Little Primate That Could