Whenever we hear a foreign language, we may not know what’s being said, but we know it means something. It isn’t gibberish. The words convey thoughts and meaning by an intelligent source.

In recent times, scientists have discovered an unmistakable language within all living things. Like a miniature library, DNA stores piles of information in extraordinary molecules that specify the details of everything from the shape of flower petals to the color of your eyes.

DNA resembles a language in many uncanny ways, as though a supremely intelligent Author and Life-Giver left His indelible message in every living thing.

The Letters of a Language

Using different combinations of four basic units, called nucleotides, DNA molecules can store all sorts of information, just like the dots and dashes of Morse code, or the binary numbers in computers.

The four nucleotides are combined into codes for twenty chemicals known as amino acids. By rearranging these twenty “letters of the genetic alphabet,” God designed the language so that it could produce all the proteins that living things need—humans alone have over 100,000 proteins.

Similarly, English speakers can combine the letters of the alphabet into any words they need—now numbering hundreds of thousands. 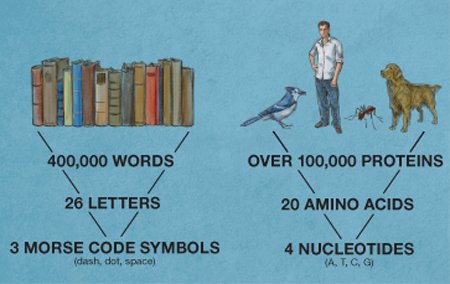 Unwrapping a Strand of DNA

When it comes to storing massive amounts of information, nothing comes close to the efficiency of DNA. A single strand of DNA is thousands of times thinner than a strand of human hair. One pinhead of DNA could hold enough information to fill a stack of books stretching from the earth to the moon 500 times.

Although DNA is wound into tight coils, your cells can quickly access, copy, and translate the information stored in DNA. DNA even has a built-in proofreader and spell-checker that ensure precise copying. Only about one mistake slips through for every 10 billion nucleotides that are copied. If only our word processors were that good!

Interestingly, any two humans are 99% identical at the genetic level. A mere 1% makes up the many differences we see among people throughout the entire world.

Even if two beings have a copy of the exact same DNA, they are still unique individuals. For example, even though identical twin babies have 100% identical DNA, they have different fingerprints. So the invisible Creator makes it clear that the source of our individuality is not just coded into DNA. We’re not just a bucket of molecules, but we are unique persons with souls, given to us by the Author of life.