Fossil graveyards are always dramatic finds, and a Jurassic turtle bone bed in the Turpan Basin of northwestern China’s Xinjiang province is no exception. “Bones upon bones, we couldn’t believe our eyes,” says paleontologist Oliver Wings. German and Chinese paleontologists found this fossil graveyard in 2008 and have been working to excavate a portion and analyze some of the turtles. University of Tübingen’s fossil turtle specialist Walter Joyce says, “This site has probably more than doubled the known number of individual turtles from the Jurassic. Some of the shells were stacked up on top of one another in the rock.”

Though there are fossilized sharks, dinosaurs, crocodiles, and mammals in the region, this graveyard seems to belong to the turtles. There are many complete turtle skeletons as well as disarticulated ones. The shells are most heavily concentrated in a 10–20 cm (4–8 inches) thick layer in an area 10 x 2 meters (about 33 x 6½ feet) along Mesa Chelonia.1 Based on a finding of 18 turtles in one half-square meter block and noting neighboring areas of the mesa with lots of turtles, the team calculates the graveyard could contain as many as 1,800 turtle fossils. 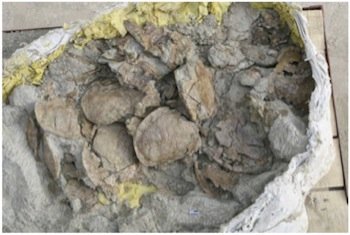 These are turtle fossils from the bone bed in northwestern China’s Turpan Basin. The shells are about 8 inches in diameter and are densely packed together. The turtles are a species of the genus Annemys. Turtle expert Walter Joyce is excited about the chance to study the biodiversity of this particular turtle. “We know from living organisms that individuals of some species look very similar, whereas individuals of other species show a lot of variation,” Joyce explained. “It is therefore always difficult to assess if your fossil looks different from others because it is a new species, or because it is part of an already known, but variable species.”2 Evidence suggests the turtle population and a great deal of sediment were violently deposited and catastrophically buried by water. Image credit: Museum für Naturkunde Berlin on livescience.com. 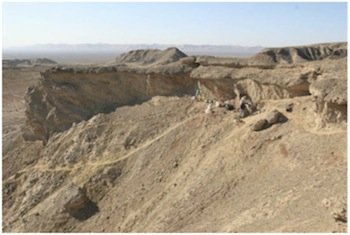 This is the fossil site on Mesa Chelonia in northwestern China’s autonomous region of Xinjiang. The researchers suspect the graveyard is Middle Jurassic, but emphasize that stratigraphy in the region is “still in its infancy” and therefore “may arrive at other results in the future.”3 Image credit: Museum für Naturkunde Berlin on livescience.com.

The team believes the turtles had gathered in a riverbed during a drought, died there, and then were struck by a flash flood that carried the lot of them along in a southwesterly direction with a great deal of sediment, depositing them where we find them today.

Why were these turtles all buried together? Because “drought-induced mass accumulations of turtles”4 occur in modern-day Australia, the team believes the turtles had gathered in a riverbed during a drought, died there, and then were struck by a flash flood that carried the lot of them along in a southwesterly direction with a great deal of sediment, depositing them where we find them today.

Geological evidence for such a drought is lacking, however. The team writes, “The sedimentological evidence to support this drought scenario is unfortunately limited. Among geological criteria for drought sediments, none are present at Mesa Chelonia. In particular, there is no evidence for mud cracks, evaporites, or caliche [a drought-associated mineral deposit] in any of the strata associated with the fossils.”5

The researchers propose a drought-induced gathering to explain the congregation of so many turtles, but the evidence to support it is not only “unfortunately limited” but completely lacking. The evidence for the drought is non-existent, and they cite none. On the other hand, they do describe the “high population density . . . in many modern turtle communities”6 and also note that turtles in another fossil graveyard, the Green River Formation’s Black Mountain turtle layer, “faithfully reflect”7 such a high population density.8 There is therefore no need to hypothesize a drought to explain the gathering.

Though evidence does not support a pre-burial drought, the findings do support a sudden and catastrophic burial. The researchers say the lack of stratification or sorting and the inclusion of vertically embedded turtles indicate the water-borne debris was a high-density, high-energy, turbulent mudflow. The lack of abrasion on the fossils suggests they were not carried far, and the lack of scavenging suggests they were buried quickly.9

A violent mudflow that carried away a population of turtles, ripping some to pieces and burying them suddenly, is consistent with the global Flood. Additionally, the underlying bed, the researchers note, was sufficiently soft to be deformed and shaped by the turtle-transporting mudflow,10 another finding consistent with the rapid accumulation of sedimentary layers during the global Flood. Catastrophic deposition associated with the global Flood produced many fossil graveyards around the world and explains the turtles of Turpan Basin.