The World’s a Graveyard

Fossil graveyards found in rock layers around the world are evidence of the global Flood.

After noting in Genesis 7 that all the high hills and the mountains were covered by water and all air-breathing life on the land was swept away and perished, it should be obvious what evidence we would expect to find.

Wouldn’t we expect to find rock layers all over the earth filled with billions of dead animals and plants that were buried rapidly and fossilized in sand, mud, and lime? Of course, and that’s exactly what we find. Furthermore, even though the catastrophic geologic activity of the Flood would have waned in the immediate post-Flood period, ongoing mini-catastrophes would still have produced localized fossil deposits.

Graveyards Around the World

Countless billions of plant and animal fossils are found in extensive “graveyards” where they had to be buried rapidly on a massive scale.

Countless billions of plant and animal fossils are found in extensive “graveyards” where they had to be buried rapidly on a massive scale. Often the fine details of the creatures are exquisitely preserved.

For example, billions of straight-shelled, chambered nautiloids (figure 2) are found fossilized with other marine creatures in a 7 foot (2 m) thick layer within the Redwall Limestone of Grand Canyon (figure 1).1 This fossil graveyard stretches for 180 miles (290 km) across northern Arizona and into southern Nevada, covering an area of at least 10,500 square miles (30,000 km2). These squid-like fossils are all different sizes, from small, young nautiloids to their bigger, older relatives. 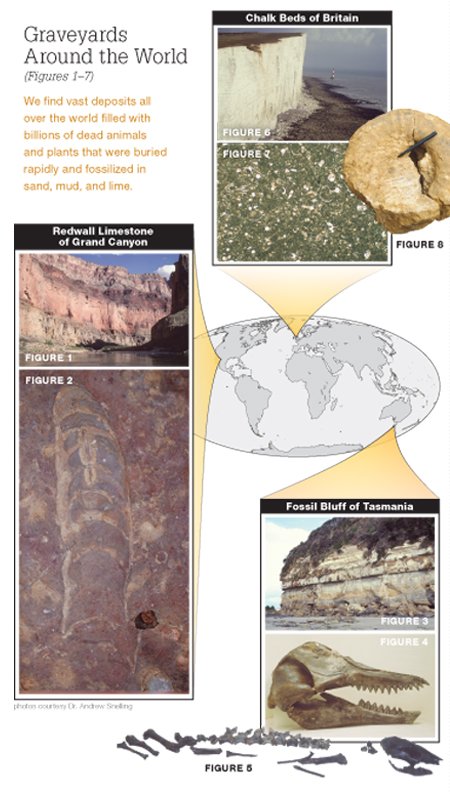 To form such a vast fossil graveyard required 24 cubic miles (100 km3) of lime sand and silt, flowing in a thick, soup-like slurry at more than 16 feet (5 m) per second (more than 11 mph [18 km/h]) to catastrophically overwhelm and bury this huge, living population of nautiloids.

Hundreds of thousands of marine creatures were buried with amphibians, spiders, scorpions, millipedes, insects, and reptiles in a fossil graveyard at Montceau-les-Mines, France.2 More than 100,000 fossil specimens, representing more than 400 species, have been recovered from a shale layer associated with coal beds in the Mazon Creek area near Chicago.3 This spectacular fossil graveyard includes ferns, insects, scorpions, and tetrapods buried with jellyfish, mollusks, crustaceans, and fish, often with soft parts exquisitely preserved.

At Florissant, Colorado, a wide variety of insects, freshwater mollusks, fish, birds, and several hundred plant species (including nuts and blossoms) are buried together.4 Bees and birds have to be buried rapidly in order to be so well preserved.

Notice in many of these examples how marine and land-dwelling creatures are found buried together. How could this have happened unless the ocean waters rose and swept over the continents in a global, catastrophic Flood?

At Fossil Bluff on the north coast of Australia’s island state of Tasmania (figure 3), many thousands of marine creatures (corals, bryozoans [lace corals], bivalves [clams], and gastropods [snails]) were buried together in a broken state, along with a toothed whale (figure 4) and a marsupial possum (figure 5).6 Whales and possums don’t live together, so only a watery catastrophe would have buried them together! In order for such large ammonites (figure 8) and other marine creatures to be buried in the chalk beds of Britain (figure 6), many trillions of microscopic marine creatures (figure 7) had to bury them catastrophically.7 These same beds also stretch right across Europe to the Middle East, as well as into the Midwest of the USA, forming a global-scale fossil graveyard. In addition, more than 7 trillion tons of vegetation are buried in the world’s coal beds found across every continent, including Antarctica.

Such was the speed at which many creatures were buried and fossilized—under catastrophic flood conditions—that they were exquisitely preserved. Many fish were buried so rapidly, virtually alive, that even fine details of fins and eye sockets have been preserved (figure 9). Many trilobites (figure 10) have been so exquisitely preserved that even the compound lens systems in their eyes are still available for detailed study. 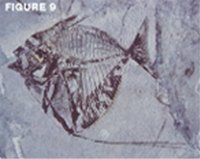 Figure 9—Some fish are buried so rapidly that fine details of fins and eye sockets have been preserved. Photo courtesy of Dr. Andrew Snelling.

Figure 10—This trilobite has been so exquisitely preserved that even the compound lens systems in their eyes are still available for detailed study. Photo courtesy of Dr. Andrew Snelling.

Mawsonites spriggi, when discovered, was identified as a fossilized jellyfish (figure 11). It was found in a sandstone bed that covers more than 400 square miles (1,040 km2) of outback South Australia.8 Millions of such soft-bodied marine creatures are exquisitely preserved in this sandstone bed.

Consider what happens to soft-bodied creatures like jellyfish when washed up on a beach today. Because they consist only of soft “jelly,” they melt in the sun and are also destroyed by waves crashing onto the beach. Based on this reality, the discoverer of these exquisitely preserved soft-bodied marine creatures concluded that all of them had to be buried in less than a day!

Some fish were buried alive and fossilized so quickly in the geologic record that they were “caught in the act” of eating their last meal (figure 12). Then there is the classic example of a female marine reptile, an ichthyosaur, about 6 feet (2 m) long, found fossilized at the moment of giving birth to her baby (figure 13)! One minute this huge creature was giving birth, then seconds later, without time to escape, mother and baby were buried and “snap frozen” in a catastrophic “avalanche” of lime mud.

Figure 12—Many fish were buried alive and fossilized quickly, such as this fish “caught in the act” of eating its last meal. Photo courtesy of Dr. Andrew Snelling.

Figure 13—This female ichthyosaur, a marine reptile, was found fossilized at the moment of giving birth to her baby. Photo courtesy of Dr. Andrew Snelling.

These are but a few examples of the many hundreds of fossil graveyards found all over the globe that are now well-documented in the geological literature.9 The countless billions and billions of fossils in these graveyards, in many cases exquisitely preserved, testify to the rapid burial of once-living plants and animals on a global scale in a watery cataclysm and its immediate aftermath. Often these fossil graveyards consist of mixtures of marine and land-dwelling creatures, indicating that the waters of this global cataclysm swept over both the oceans and the continents.

When we again read the biblical account of the Flood and ask ourselves what evidence we should expect, the answer is obvious—billions of dead plants and animals buried in rock layers laid down by water all over the world. And that’s exactly what we find. The global, cataclysmic Genesis Flood and its aftermath was an actual event in history, just as God tells us in His record of earth’s history.

The next article in this special geology series will examine in more detail the geologic evidence of rapidly deposited sediment layers spread across vast areas, caused by the Flood waters described in Genesis 7–8.

Previous Article Four Women, a Boat, and Lots of Kids Next Article Marvels of the Monarch