The Confusion of Elephant and Mammoth Classification

It is likely that all mammoths should be classified as one species, or at least within one biblical kind.

Mammoths are part of the order Proboscidea, or elephant order. The order was named from the word proboscis, meaning “long, flexible snout” or trunk. There are only two living representatives of Proboscidea, the African and Asian elephants. Many other types of elephants are found as fossils, including mastodons and gomphotheres.1 A particular type of mastodon, Mammut americanum, accompanied the mammoth into North America during the Ice Age. However, it is believed the mammoths and mastodons in North America lived in different habitats — mammoths preferring open grassland and mastodons favoring forested areas.

All of the animals in the order Proboscidea in general look like types of elephants. They mostly vary on the shape of the tusks, the details of the teeth, and the number and location of their tusks.2 The gomphothere is an interesting elephant type. It has four tusks, two small ones extending out from the upper jaw, typical of nearly all Proboscidea, and two that spread downward from the lower jaw. One type of gomphothere has two broad lower tusks that are shovel-shaped.

Ever since the beginning of the science of biology, scientists have attempted to group animals into categories. The groups were based generally on the way the animals looked or by their morphology. Carolus Linnaeus was the first to provide a major classification of living animals about 250 years ago, starting with the kingdom and ending with the variety (table A1.1). The second lowest level, the species, is supposed to be an interbreeding unit in nature that produces viable offspring.

There are problems defining a species for several reasons. For many organisms, sex is irrelevant; there are no males and no females. Furthermore, biologists do not know how most living things reproduce in the wild.3 Some types of organisms may look similar, but do not breed. There have been a number of surprises when supposedly separate species that do not normally breed in the wild have mated and produced offspring in zoos. This brings up the question of what really is an interbreeding unit. Biologists have learned over the years that animals that can potentially breed do not normally mate because of various nongenetic factors, including physical appearance, social behavior, and different habitats.

When scientists applied Linnaeus’s system to fossils, they encountered many problems. Sometimes a fossil is only a scrap, such as a piece of jaw or teeth, and secondly, there appears to be much more variety with fossils than there is in living animals. The worst problem is that the test of interbreeding to determine the boundaries of a species can never be applied with fossils. The resulting classification criteria become quite nebulous and subjective. There are biologists who favor making any variation in teeth or bone a different species. These are called the splitters, who multiply the number of species. Then there are the lumpers, who accept a fair amount of variety for their definitions of species, genus, family, etc. These two groups have battled for years.

There are several methods now employed for classifying organisms. Since any one organism has hundreds of characteristics that can potentially be used to compare with other organisms, the biologists must decide which characteristics are important. This can be rather arbitrary. Those characteristics that are not important, but similar in organisms that are classified far apart, are attributed to parallel or convergent evolution. Such a similarity in organisms classified far apart is attributed to animals living in similar environments. These animals supposedly develop similar structures in similar environments. This concept is questionable because there is an abundance of different variables on both the regional scale and the microscale that make up any one environment, and it is doubtful that any two environments would be close enough over millions of years to produce similar structures.

Scientists who classify animals, called taxonomists, have run into numerous problems in attempting to group the various elephants.4 It seems that the splitters have had a “heyday” with the multiplication of species within the order Proboscidea.5 Fox and Smith6 state:

In all, Webb clarifies the often cumbersome elephant taxonomy, with its long “splitting” tradition in nomenclature . . .

Many subjective elements are inherent within the classification system, as indicated by the recognition that parallel evolution and intra-taxon variability are widespread phenomena.7 So, the art of classifying the elephants is difficult. Tassy and Shoshani8 state their frustration over the whole enterprise: “The classification and phylogeny of proboscideans is a never-ending academic game . . .”

The main classification criterion for Proboscidea, as well as other animals, is the shape of the teeth.9 As stated in a recent conference that Foronova and Zudin10 attended:

The wide dispersal of elephants into the vast territories of Eurasia and North America in the Pliocene and Pleistocene led to the appearance of a large variety of forms. The group systematics, based partly on cranial features and mainly on molar structure, are complicated and often confused. 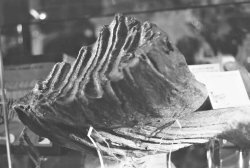 How well do teeth serve as a classification scheme? The literature indicates that the answer is not very well. The crowns of African elephant molars are diamond shaped, while in the Asian elephant they are composed of thin parallel ridges, called lamellae, that are similar to mammoths (figure A1.1).11 There is also a fair amount of variability within the two types of modern elephant teeth.12 To indicate how arbitrary and subjective the use of teeth can be in classifying Proboscidea, there is a case reported in the literature of one fossil mastodon from Spain that exhibited teeth from two different “families” of Proboscidea:

What does this say about employing teeth to classify species, especially when taxonomists argue over fine details of teeth morphology?

Obvious evidence that the splitters have gone wild is that the two types of living elephants, the African elephant, Loxodonta africana, and the Asian elephant, Elephas maximus, are classified into two different genera. There is even talk of adding a second species within the African elephant genus, based on mitochondrial DNA.14 However, it is known that the two genera of modern elephants can interbreed successfully, which is normally one of the tests for determining varieties within one species.

This successful mating occurred only once.15 It happened in the Chester Zoo in England between a male African elephant and a female Asian elephant. The male offspring, named Motty, died 10 days later of a disease (necrotic enterocolitis). Hybrid offspring do not occur in the wild because the range of the African and Asian elephants does not overlap in nature. Hybrids are more likely to occur in zoos, but generally, a zoo that owns both genera of elephants would not house them together. Based on the definition of species, the two living genera of elephants should probably be classified as one species.

The example of the successful mating of the two living genera of elephants indicates that many other elephants should be classified into the same species. The diamond shape of the African elephant teeth resembles the teeth of the Ice Age American mastodon, commonly found in surficial sediments in the northeastern United States. There are not many other differences between these two animals. The thin parallel ridges of the Asian elephant resemble the teeth of mammoths.16 Besides more hair, the differences between the woolly mammoth and the Asian elephant are minor. This suggests the likelihood of interbreeding capabilities of American mastodons and mammoths.

Mammoths are a genus within the order Proboscidea and have the same classification problems as with other elephants. It is believed by geologists and paleontologists, who study fossils, that the order Proboscidea evolved about 50 million years ago from northern Africa.17 The first mammoths are thought to have appeared in Africa four million years ago and spread northward and evolved in Eurasia and North America. Evolutionists believe the woolly mammoth is one of the last species to have evolved from other types of mammoths in Siberia as a result of the extreme cold.18

The taxonomy of mammoths is usually split geographically into a Eurasian and a North American group. The classification scheme is based mainly on such variables as molar hypsodonty (height of a crown), number of lamellae (ridges on the crown), and enamel thickness. History shows there are a multiplication of mammoth names, and when similar types are discovered in Eurasia and North America, the similarity is attributed to the vague and seemingly unreasonable concept of “parallel evolution.”19

True to form, there is significant within-species variability to explain similarities between two supposedly different species, applying such adjectives as an advanced or primitive character.20 Harington and Shackleton21 point out some of the problems with the mammoth classification scheme:

It is likely that all mammoths should be classified as one species, or at least within one biblical kind. Furthermore, I would include all the members of the order Proboscidea within one Genesis kind (see appendix 3). In general, there seem to be two main varieties, or subspecies, of mammoths on both continents. The woolly mammoth, Mammuthus primigenius, is one variety that is relatively small, about 9 to 11 feet (about 3 meters) tall and weighing about 12,000 pounds (5,500 kilograms). It is found in both Eurasia and North America. The second variety, for simplification, will be lumped together from both Eurasia and North America and referred to as the Columbian mammoth, Mammuthus columbi, which is about 13 feet (4 meters) tall and weighs 20,000 pounds (9,100 kilograms). The woolly mammoth generally favored the north, and the Columbian mammoth ranged mostly across the southern part of the mammoth range. There was overlap at the north-south boundary of the ranges, and there seems to be a continuum between the two varieties of mammoths. Haynes22 sums it up:

However, there may be a gradient [continuum] based on body size and tooth morphology that could indicate that M. columbi and M. primigenius were not descendants of two entirely separate dispersals . . . No clear differences in postcranial morphology distinguish the two species; enamel thickness is considered partially diagnostic, but individual teeth and even parts of a given tooth have variable enamel thickness.

Author Michael Oard gives plausible explanations of the seemingly unsolvable mysteries about the Ice Age and the woolly mammoths. Many other Ice Age topics are explained including super floods, ice cores, man in the Ice Age, and the number of ice ages.