Lyuba, a baby woolly mammoth, has left frosty Siberia for a world tour, which includes a stop this spring in Illinois. This is one celebrity that won’t be welcomed down any red carpet in Chicago, though, for Lyuba died thousands of years ago at one month old.

The size of a large dog, Lyuba is extremely well-preserved, even though secular researchers have dated her at 40,000 years old. Creationist researchers argue that this infant mammoth actually died around 2000 BC, during the Ice Age that followed Noah’s global Flood. Lyuba’s astonishing lack of decay supports a death that was much more recent than the nonbiblical timescale. 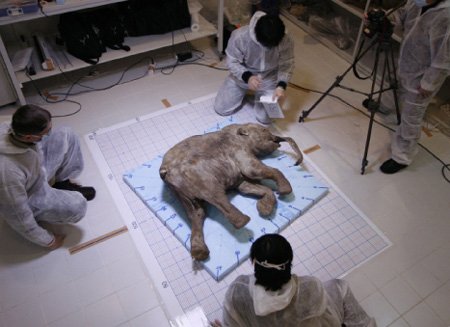 An international team of scientists studied Lyuba after her discovery, performing an autopsy and DNA analysis. Lyuba will be on exhibit at the Field Museum in Chicago this spring through fall. Photo © RIA Novosti

With such well-preserved tissue available, a long-range goal of scientists is to clone one of these giants back to life. How? By taking a cell of a deceased woolly mammoth and inserting it into the womb of an Asian elephant.

Such a marvel would be possible because mammoths and elephants both descended from the same elephant kind, which God created during Creation Week (Genesis 1) and preserved on Noah’s Ark to repopulate the planet after the Flood (Genesis 7–9).