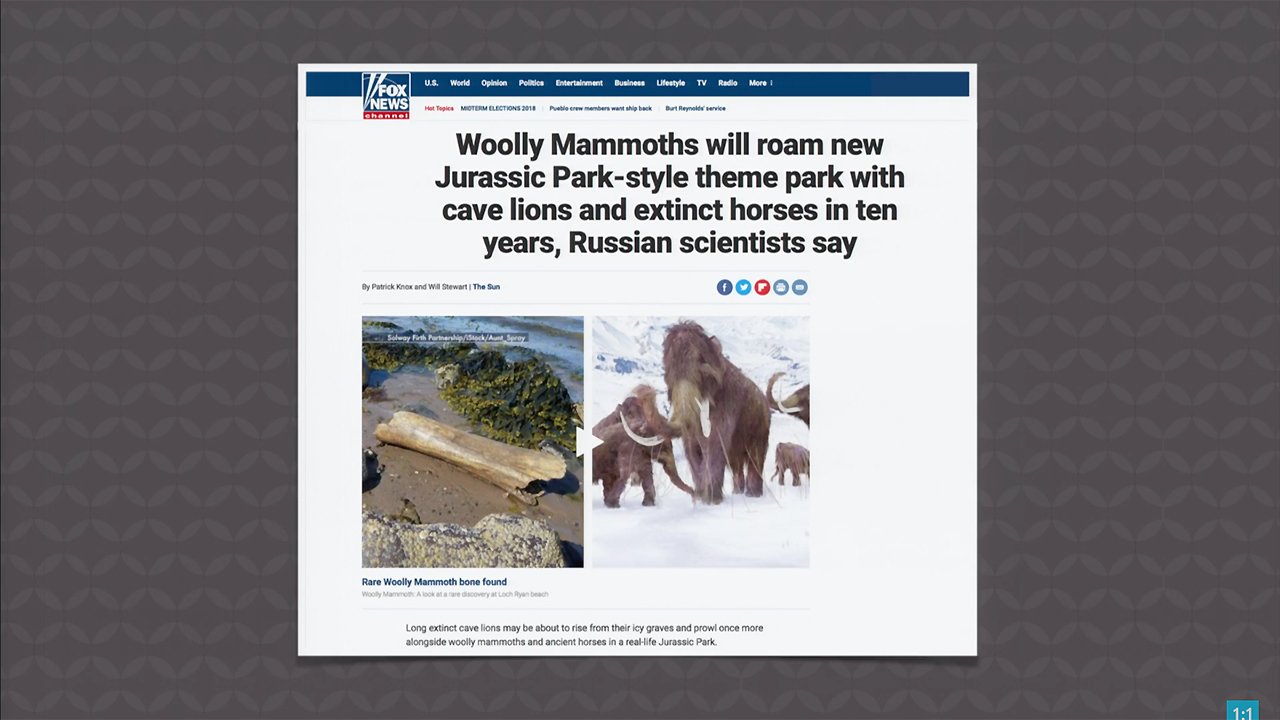 You might want to start saving your money now. In only 10 years or so, you’ll be able (so we’re told) to see woolly mammoths, rhinos, cave lions, and long-extinct horses in a Siberian “Pleistocene Park”. Scientists from Russia, South Korea, and Japan (as well as Harvard University geneticist George Church) are all working towards cloning these ice age animals and then putting them into a research (and tourist) park near Northern-Eastern Federal University (NEFU) in Yakutsk, Siberia.

According to the Siberian Times, there are already cloning experiments underway on extinct ancient horses and cave lions. Woolly mammoths would have to be recreated from cells found in remains buried in the Siberian permafrost. Quite a few mammoth remains have been found, and a group of scientists are actively looking for more pristine samples.

Once enough intact DNA is found (and supplemented with elephant genes), it would be implanted into an Asian Elephant embryo and would be born from an elephant surrogate mother. Alternatively, Professor Church has plans to use an artificial womb in order to bypass using a surrogate elephant mother. Now of course, these would actually be mammoth-elephant hybrids, not true woolly mammoths.

Aisen Nikolaev, head of Yakutia region where the cloning center and park will be located, stated:

“Back in 2014, a group of my friends and I proposed a project to create an Ice Age Park with mammoths—everyone laughed then, but they’re not laughing now. Today, technology is developing at an explosive pace, and what yesterday seemed to be scientific nonsense, today is an absolutely clear prospect for scientists. I believe that miracles are possible.”

“We are seeing now that every year brings more and more high quality mammoth remains. I am certain that with the current speed of development of genetic technologies we will be able to reach some real results in the near future.”

Now most of these news stories throw out numbers like 10,000 to 30,000 years ago for the date of these animals’ extinctions. But this is based on evolutionary assumptions and is not accurate. Looking at this from a biblical worldview, we would put Ice Age animal extinctions at roughly 2000–1800 BC.

I also find it interesting that the word miracles is used here by Governor Nikolaev in this context. While it is certainly amazing that technology has progressed to the point that bringing back extinct animals may be possible, the work being done is pure operational science, being carried out by intelligent humans. They are not creating new information but using genetic information that already exists! But the real miracle on display (and which is just offhandedly accepted) is the complexity of the DNA that these scientists are extracting and working with, which obviously points to an intelligent Creator—Christ Jesus (Colossians 1:16-17).

This item was discussed today on Answers News with regular cohost Bodie Hodge and guest Bryan Osborne, AiG’s curriculum specialist. Answers News is our twice-weekly news program filmed live before a studio audience here at the Creation Museum and broadcast on my Facebook page and the Answers in Genesis Facebook page. We also discussed the following fascinating topics:

Watch the entire episode of Answers News for September 27, 2018.