Megalonyx—Gentle Giant of the Ice Age

It was designed for life on the ground, starting with its feet.

Among the living mammals, sloths are an odd group.1 Hanging upside down in trees, eating leaves, and generally not moving very much (or very fast!), they are nonetheless favorites at zoos. After all, they’re kind of cute. But if you go to a natural history museum, you’re likely to see a sloth skeleton which looks very different from the sloths hanging around in the zoo. These are the giant ground sloths, and they were built for walking.

One of the most common giant sloths known from North America is Megalonyx jeffersonii. Fossils of this extinct animal are found all over the continent in sedimentary deposits formed just prior to and during the Ice Age that occurred after Noah’s Flood.2 From West Virginia to California, from Texas to North Dakota, and even throughout Canada’s Northwest and Yukon territories, this sloth really got around!

Feet Made for Walking

Now Megalonyx certainly doesn’t look like a typical sloth. At up to 10 feet (3 m) long, weighing 1,000 pounds (455 kg), and walking on all fours, it was about the size of an American bison. At that size, this short-faced, barrel-chested behemoth likely didn’t spend any time hanging upside down in trees! Instead, it was designed for life on the ground, starting with its feet. 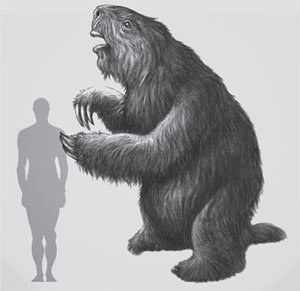 You see, unlike most sloths, the hind feet of Megalonyx are what biologists call “plantigrade.” That means they are built like human feet: Megalonyx walked with its heel, foot, and toe bones all on the ground, just as you and I do. This provided good surface area for carrying weight and better balance when Megalonyx stood up.

And Megalonyx probably spent a lot of time standing in order to eat. To give this giant ground sloth added stability and to ease the stress on its massive legs, God provided Megalonyx with a thick, muscular tail (a rarity for land mammals), which meant that Megalonyx easily balanced on a “tripod.” Its massive hips gave ample area for strong muscles, while Megalonyx spent time ripping down and feasting on soft leaves and fruit from trees.

Bending down those huge branches to reach its mouth was the job of Megalonyx’s powerful arms. The arm and shoulder bones are large, and have wide wings and large knobs where big muscles attached.

Each of the three fingers on the hand was equipped with large, powerful claws, up to 8 inches (20 cm) long! Unlike the claws of modern lions, these “giant claws” (what Megalonyx means) were mostly used to grasp and tear up branches and leaves. However, they also made for a very effective defense against predators: one swipe from the arm of a Megalonyx may have been more powerful than a grizzly bear’s!

But such encounters were probably rare for this gentle giant. Its large size, big claws, and ability to stand up made it look very, very big. This meant Megalonyx probably didn’t worry too often about predators. 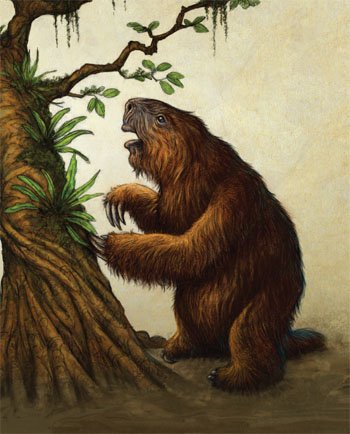 So instead of worrying, Megalonyx could concentrate on his main task: eating. One of the most peculiar anatomical features of sloths is their teeth, which lack the hard enamel found in humans and nearly all other mammals.3 Instead, sloths possess simple peg-like molar (back) teeth made primarily of the material dentin.4 Dentin is much softer than enamel, and wears out faster.

How can teeth that wear out faster be a good design? The surprising answer is that sloth teeth never stop growing. Because of this, Megalonyx (and modern sloths) could keep on eating even if a tooth was damaged, since the damaged part would wear out and be replaced by healthy dentin over time. Unlike nearly all other mammals, Megalonyx never had to worry about a chipped tooth!

Who would have thought that big, lumbering herbivores with flat feet, a fat tail, huge claws, and “weak” teeth could migrate all the way into North America from South America and be so successful? In the changing world after Noah’s Flood, including the Ice Age, Megalonyx reminds us that God’s intriguing and effective designs are often packaged in surprising ways. Indeed, His ways are higher than our ways, and hallelujah for that!

Marcus Ross is the assistant professor of geology and assistant director for the Center for Creation Studies at Liberty University. He holds a master’s degree in paleontology and a PhD in geosciences from the University of Rhode Island.