Run For Your Life! Evolution’s Solution

Good designs last, evolutionists conclude, but where did they come from in the first place?

Why is the number of vertebrae in the trunk of mammals, despite diverse lifestyles, “surprisingly constant”?1 Evolutionary biologists investigating biodiversity want to know.

To solve this riddle, Frietson Galis of Leiden’s Naturalis Biodiversity Center and colleagues examined the skeletons of 90 different mammalian species—774 specimens housed at 9 different natural history museums—assessing how much the shape and number of vertebrae in each section of the back varied. They found that there is minimal variation among fast, agile mammals, even up to the family level. Slower mammals are less consistent. 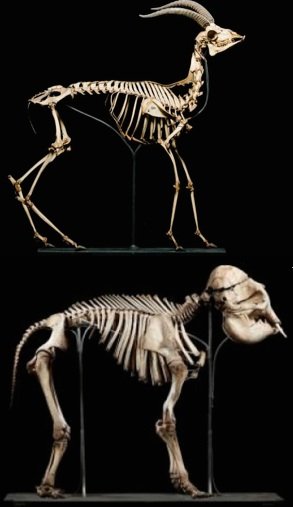 Here are two of the 90 species of mammals recently surveyed in an effort to explain the consistency of mammalian vertebral design. Fast, agile animals like the gazelle (top) and the predators that chase it have backs built for flexibility thanks to the long lumbar region. Slower running mammals that do not rely on speed for survival, like the elephant (bottom), have longer thoracic cavities and shorter lumbar regions. The vertebral shapes in fast mammals are also intricately optimized for flexibility, differing from the shapes found in slower mammals. Image by Joris van Alphen, via Proceedings of the National Academy of Sciences.2

Mammals that depend on speed and agility for survival—whether carnivores or the animals they chase—have vertebral columns optimized for flexibility. A greater proportion of their vertebrae are apportioned to the more flexible part of the back than in slow mammals.3 Those great evolutionary constructs resist further change, researchers say. In short, once upon a time evolution stumbled on speedy designs, vertebral plans that produced such fast, agile animals that natural selection prevented further random tinkering with their anatomy.

Researchers also learned that in families of slow mammals for which speed is not critical, spinal flexibility seems to be less important. Those animals are more likely to vary a bit, exhibiting variations that increase stiffness, yet those variations persist. Animals that have long been domesticated or crossbred, thus obviating the effects of natural selection based on survival, also vary more in the number of spinal vertebrae allotted to the more flexible trunk.

“The stiffness of the back of a mammal is key to whether evolutionary change is possible or not,” explains Frietson Galis. “The locomotion of slow mammals with a stiff back is only marginally affected by irregular lumbosacral joints, but for fast running mammals such joints are fatal,” adds coauthor Clara ten Broek.

Anatomy and biomechanical functionality are related. Ribs are attached to thoracic vertebrae, and this stiffens the upper back a bit. Sacral vertebra are fused together, producing a stiff region at the bottom. Thus an animal’s flexibility hinges on the total number of presacral vertebra and especially on the number of lumbar vertebrae—the vertebrae above the fused sacral bones and below the bones whose mobility is restricted by ribs. Therefore, anatomical designs that assign more vertebrae to the lumbar region are more flexible than arrangements with a large chest and a short lower back.

Comparison of the skeletons of fast, slow, wild, and domesticated mammals confirms these biomechanics. The fastest mammals—like cheetahs and gazelles—have a smaller proportion of their vertebral columns associated with the chest and a longer section apportioned to lumbar vertebrae. The number and the specific shapes of these lumbar vertebrae optimize flexibility in multiple dimensions, allowing for strength even when twisting as the animals gallop or bound along at high speed. Within each fast family of mammals, the vertebral design is remarkably constant.

Within families and even individual species of slower mammals—like elephants and badgers and pigs—the number of vertebrae apportioned to the flexible lumbar region vary. Those variations are typically in the form of an increased allotment of vertebrae to the lumbosacral region, where the bones may be at least partially fused. Thus, the variations that occur are changes that decrease flexibility. Such stiff-backed variations occur with some regularity among mammals not built for speed.

This study confirms the principles of natural selection within each animal family. Animals whose lifestyles in the present world make them depend upon speed for survival tend to maintain a skeletal structure that optimizes their speed. Flexibility-limiting variations can develop in populations of animals whose survival does not depend on their ability to run down their dinner or to flee from faster animals.

Survival-of-the-fittest, the necessity of running fast to live—or to eat—is a by-product of the suffering and death that entered the world after Adam’s sin.

Yet none of this has anything to do with a molecules-to-man kind of evolution. None of this demonstrates how various kinds of vertebral body plans could evolve from a common mammalian ancestor. Natural selection, an observable phenomenon, does not supply the novel genetic information to produce newer more complex kinds on animals but only affects the variations within the population of each kind of animal. Domesticated animals are less likely to be affected by natural selection, as human management and artificial selection favor survival of animals that might be otherwise weeded out. But they only vary within their created kinds and certainly do not embark on a path of upward evolutionary complexity.

Biological observations confirm that animals reproduce and vary within their created kinds. The researchers found that the degree of variation was consistent within each sort of animal “at the family level.” Biblical creationists regularly point out that our modern categories—like phylum, family, genus, and species—most nearly reflect the “created kinds” of Genesis at the family level. Representatives of each kind of air-breathing land animals were preserved with Noah’s family on the Ark about 4,350 years ago, and from those kinds of animals the biodiversity we see today has developed. Not only do the findings of the study reflect the principles of natural selection within each family of animals but also they show how our Common Designer—our Creator, God—used similar designs in many kinds of animals, with engineering nuances of vertebral shapes and proportions that best support the functional needs of each animal’s lifestyle both before man’s disobedience and the Curse caused sin and death and afterward.

The Creator God of the Bible is a wise engineer and a grand designer. God has told us the truth about our origins and the origins of the animals in the Bible, as well as the truth about our sinful nature and about how the rebellion of Adam led to the suffering and death we see in the world. Survival-of-the-fittest, the necessity of running fast to live—or to eat—is a by-product of the suffering and death that entered the world after Adam’s sin.

As we marvel at God’s designs that optimize each kind of animal for the niche it occupies in this world, we should give thought to the sin guilt we all bear. God, because He loves us (John 3:16–18), has also designed a way for those who repent and trust in Christ’s sacrifice for sin to be reconciled (Romans 6:23; Romans 5:8) to Him, our Creator, and to have abundant and eternal life with Him.

Previous Article Did All Dinosaurs Have Feathers? Next Article Plants for the “Prehistoric” Palate