The journal Science reported in September the discovery of the first mechanical gears to be found in a living organism, located on the hind legs of an insect (the nymph stage of the leafhopper Issus coleoptratus).

Leafhoppers are only a couple millimeters long, but with one mighty jump they can spring at a velocity of 3.9 meters per second (nearly 9 miles per hour), with an acceleration of nearly 400 g (a fighter pilot in the heat of battle experiences less than 9 g). 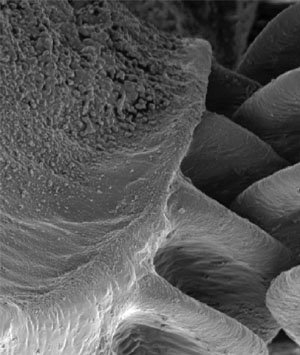 Scanning electron micrograph image of the intermeshing gears in the leafhopper.

The jump takes only two milliseconds. If both of the leafhopper’s hind legs didn’t push off at precisely the same time, it would spin out of control. Yet nerve impulses can’t travel fast enough to coordinate this feat. The solution is a miniscule set of gears between the legs.

As soon as one leg begins to move, the other one does too. Ten to twelve tiny gear teeth—just 6–12 ten-thousandths of an inch (15–30 thousandths of a millimeter) long—are located on the inner surface of each hind leg. These curved cogs mesh under the abdomen. As the insect cocks its legs to jump, they must move in unison, no matter which leg moves first. During the jump, the gear cogs roll past each other at a rate of nearly 50,000 teeth per second.

Rather than being symmetrical like most manmade gears, the leafhopper nymph’s gear teeth are curved.

Rather than being symmetrical like most manmade gears, the leafhopper nymph’s gear teeth are curved and all point toward their point of contact. Coauthor Gregory Sutton says this unique type of gear is built for “high precision and speed in one direction. It’s a prototype for a new type of gear.”

Yet again, our Creator has given us a glimpse into His matchless creativity. This perfectly functioning, finely tuned, irreducibly complex gear is another testament to His handiwork, clearly seen in all of creation.