We’ve all heard about “the five senses”—sight, taste, touch, smell, and hearing. But are there other ways to experience the world? Yes, it turns out that God designed certain animals with “super senses” that make us look weak in comparison!

How Do You Experience the World?

In a thunderstorm you can watch the rain pelting the neighbors’ rooftops, while you sniff the damp dirt, hear the crackling thunder, taste the moist air, and revel in the water running down your face. A simple rain shower can engage all five senses. With each sense we can experience the wonderful world God has made, for we know “the hearing ear and the seeing eye, the Lord has made them both” (Proverbs 20:12). We rely on our senses to tell us accurately about our surroundings. However, our five senses cannot detect everything. The world is full of information beyond our reach, but many animals have “sixth senses”—super senses that enable them to experience other dimensions of our world. These bonus senses help these creatures survive and thrive in their habitats.

One special sense is called mechanoreception. This sense allows web-spinning spiders to perceive minute pressure on their exoskeleton. Spiders have specialized organs called slit sensilla. These organs are small grooves at the spider’s joints, which change shape under stress. As the spider sits on its web, the slightest movement on the strand causes a slit to change shape, and mechanoreceptors in the slit detect the change.

The slit sensillum is so precise that the spider can determine the creature’s size and weight, or establish if the strain was just a passing breeze. The slit sensillum and other special senses are possibly as important for survival as the spider’s own eyes.

Animals that fly by night and can’t rely on vision need an alternative way to navigate safely without relying on their eyes. Bouncing sound waves off nearby objects is a handy way to move around if you have the right equipment. Bats do, and scientists are still uncovering new surprises about the complex, interacting components that must all be in place for this system to work. 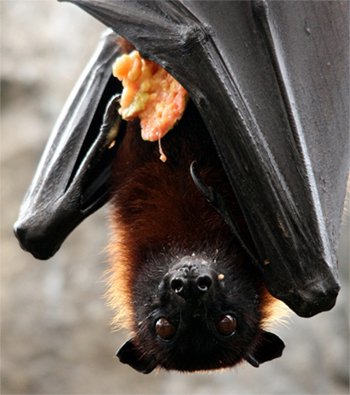 Bats rely on complex echolocation to maneuver in the dark.

Two things are needed to see with your ears (a phenomenon more commonly known as echolocation): a sound producer and a sound receiver. Bats use their vocal cords to produce sound waves, controlling the intensity, direction, and frequency. This sound is loud enough to easily bounce off any object, whether moving or stationary, and return to the bat.

The sound receivers, the bat’s ears, may be the most interesting parts of the echolocation system. Bats have complete control over which sounds their ears pick up. Otherwise, their highly sensitive ears would go deaf whenever they made their loud, high-frequency sounds.

So when the bat produces sound, either it uses its middle-ear muscles to close its ears or it adjusts them to hear only a certain frequency. As the sound waves bounce back toward the bat, the frequency shifts, due to something called the Doppler Effect. This allows the bat to protect its ears from the loud frequency going out while retaining the ability to hear other frequencies coming in.

But not all animals live in the dark. Even when your world is full of light, it can be difficult to find your way. Another impressive method of navigation, used by pigeons, is called magnetoreception. Homing pigeons can detect the earth’s magnetic field and use it as a map to find their way home. 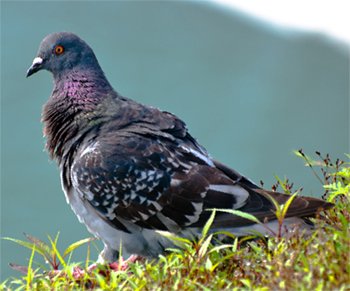 Pigeons can navigate their way back home using magnetoreceptors located at the base of their beaks.

In flight, there are three dimensions to account for: left and right, up and down, and forward and backward. Like other birds, pigeons are known for their excellent eyesight. Most of their navigation can be handled by landmarks and other visual cues. However, when they are put in a cage and transported to a strange location, how do they manage to find their way home?

Though scientists have yet to determine precisely how pigeons respond to the earth’s magnetic field, they have found many clues. The most promising hint is in their spectacular beaks. Along the skin lining of their upper beak are iron-containing particles called magnetite. The magnetite is attached to nerve endings arranged in a complex, three-dimensional pattern.

This three-dimensional spread is the key to creating a three-dimensional map of the world. The earth’s magnetic field moves in three dimensions, and the pigeon can detect it in all three directions. The details still are uncertain, but it is assumed that the sensory cells associated with the magnetite (called magnetoreceptors) sense slight changes in the angle of the magnetic field, enabling the pigeon to find its way home.

Looking for changes in magnetism isn’t the only way animals can sense the environment. Sharks, as well as many other vertebrates that live in the water, can locate other creatures with the aid of electroreception. This means they can detect electrical impulses. 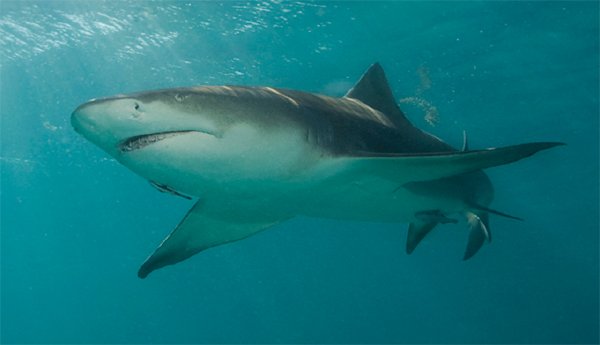 When a fish moves, its brain sends out a tiny nerve impulse to the muscles that contract. Those impulses create an electric field that extends into the water and can be detected.

Electroreception is found typically in animals that live in salt water. Even if humans had the ability to detect electric fields emanating from contracting muscles, it probably wouldn’t be very sensitive. Air isn’t a very good medium for carrying electric fields. However, salt water is because it has a higher concentration of ions.

Sharks have the most sensitive electroreception abilities in the animal kingdom. They can detect an electric field as weak as five billionths of a volt per centimeter, which is significantly weaker than the electric field produced by a ticking wristwatch. 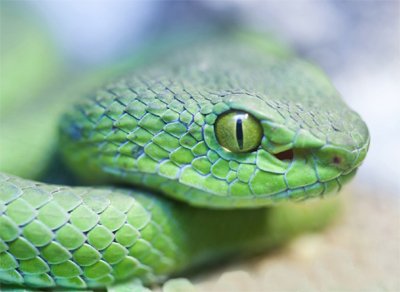 Many sixth senses help animals find food. For example, snakes known as pit vipers and pythons, as well as some boas, use infrared detectors called pit organs. On pit vipers these organs look like an extra pair of nostrils between the eyes and nostrils, but on pythons and most boas the pits are located on the upper lip. These specialized pit organs can “see” infrared radiation.

Every object with a temperature above absolute zero has heat. Some of the heat is emitted as infrared radiation, a type of light that cannot be seen with the naked eye. Heat receptors at the back of the pit organ detect infrared much the same way that photoreceptors (rods and cones) in your eye detect visible light. Pit organs detect temperature variations with great precision, as little as 0.0054°F (0.003°C).

Pit vipers often hunt at night, waiting for warm-blooded prey to pass by. Since animals give off infrared light, the snake can “see” with its pit organs, even in the dark. While pit organs are useful in today’s fallen world, they were not needed for this purpose before the Fall. Perhaps the vipers’ sixth sense aided in locating ripe fruit in the dark, though this is conjecture. (Ripe fruit emits infrared radiation up to a degree hotter than the surrounding plants, and rotten fruit is even hotter.)

Another possibility is that pit vipers used their pit organs to find warm resting spots, where they could absorb heat. Since they are cold-blooded, they cannot generate their own body heat through metabolism.

Since snakes no longer consume warm fruit, they need help from several senses to distinguish food from warm but inedible objects. Pit vipers don’t want to bite warm rocks! Amazingly, they can ignore background infrared radiation (from rocks and other inedible sources). This is partly due to a skill called adaptation, the ability to ignore certain unchanging stimuli. Your skin relies upon this skill as well. Your brain is not always conscious of the clothes touching your body unless something changes significantly in the texture, pressure, or weight. Similarly, the pit viper is alerted by movement and contrasting temperatures. When a warm-blooded mouse wanders by, it sticks out like a sore thumb against the cooler background.

Distinguishing heat sources is a bit difficult, so many pit vipers prefer to find a cooler place to sit and wait for dinner to come by. This explains why they often hunt at night, when it is cooler and the prey’s warm body stands out more sharply.

Handiwork of the Creator

These bonus senses might sound like science fiction, but God has designed the animal kingdom to exhibit these wonders abundantly every day. No incremental changes over millions of years could ever account for these astounding sensors, which work in perfect sync with the brain.

Each extra sense is every bit as complex as the traditional five. Just as the components of the eye could not spontaneously arise in stages through evolution, these complex senses could not arise without a Master Craftsman. The Creator’s handiwork, around six thousand years ago, gave these animals the ability to experience this world in a way we never have. But who knows, maybe we will someday . . . in our resurrection bodies!

Heather Brinson Bruce earned dual degrees in English and chemistry from Clemson University. She write for Answers magazine as a freelance author.