How the Scorpion Got Its Sting

A genetically engineered toxin is said to show how scorpions evolved.

How did the scorpion get its sting? An international team of scientists reports it has discovered how scorpion venom evolved from an ancestral protein shared with insects. They claim they’ve established “an evolutionary relationship of two distantly related protein families”1 and therefore between the animals that make them.

Scorpion tails deliver a toxic cocktail of compounds for defense and the acquisition of dinner. Shunyi Zhu, lead author of a paper published in the journal Molecular Biology and Evolution, reports scorpion neurotoxin is biochemically similar to certain insect-produced antimicrobial proteins. However, Zhu says it has been difficult to prove the evolutionary relationship between insects and scorpions because there is little genetic similarity, leaving scientists with “a puzzle for more than 20 years.”

To solve this “puzzle,” Zhu and colleagues first identified, in a molecular sense, the “business end” of the scorpion’s paralyzing toxin. This is the part of scorpion neurotoxin molecules that makes them toxic. (These toxins interfere with the cell membranes of neurons.) They called this part of the toxin molecule “scorpion toxin signature” (STS).

Then they searched insect-produced protein molecules called “defensins” for regions chemically resembling this STS. Defensins are protective proteins produced by many plants and animals. They disrupt microbial cell membranes but are otherwise nontoxic. 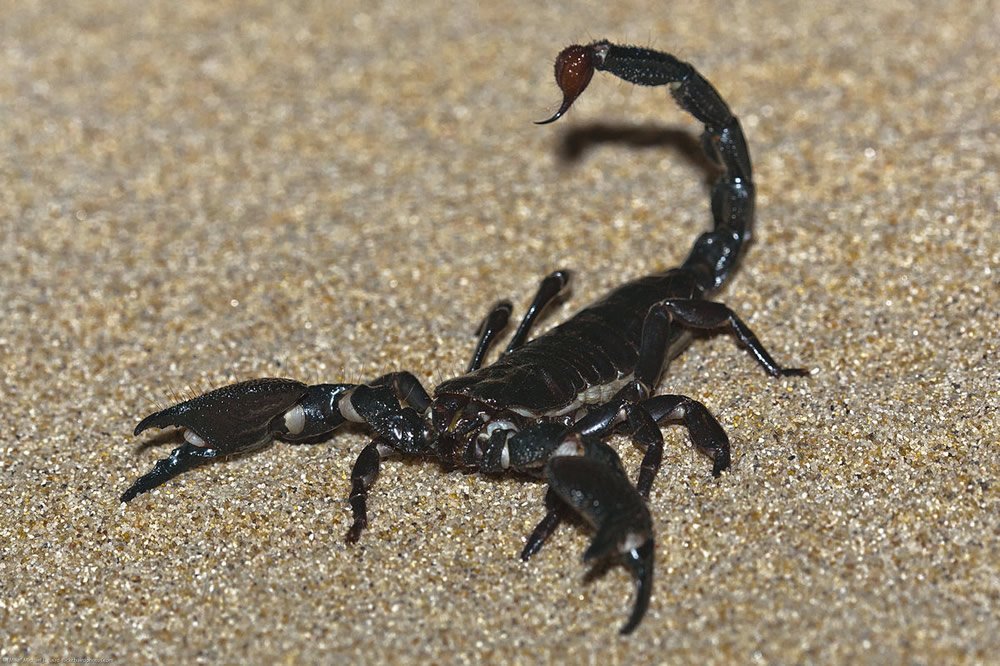 This scorpion, like all 1,700 species, can deliver a venomous sting with its tail. Scorpions are a dramatic reminder of the deadly consequences of man’s rebellion against God. Read more about scorpions in “Scorpions—Armed and Dangerous.” Image by Mike Baird and Flickr, via Wikipedia Commons.

The team found a region resembling the STS in the defensins of green shield bugs, spined soldier bugs, and three species of backswimmer. “It is surprising that only insect defensins from venomous insects contain scorpion toxin signatures,” says Zhu. “These defensins clearly represent an evolutionary intermediate and could have the potential to develop into a toxin with similar action to scorpion toxins.”

To determine just what sort of mutation might be required to transform an insect defensin into the STS, the researchers studied the genes that encode the corresponding proteins. They found that with a deletion from the insect gene, they could genetically engineer a scorpion-like toxic protein—which they named Navitoxin.

This model represents the 3D molecular structure of Navitoxin, a synthetic toxin created by genetically engineering a change in the structure of an antimicrobial insect protein. Navitoxin is structurally similar to part of the neurotoxin molecule produced by scorpions. Because Navitoxin can be genetically engineered in the laboratory, the evolutionary researchers assume a similar process was involved in evolving scorpions from non-scorpions. Image by Zhu et al., via BBC.2

“The most significant findings of our paper are the predictability of scorpion toxicity evolution—arising via structural deletion of a loop on an ancestral defensin scaffold recruited into the venom to remove steric hindrance of peptide-channel interaction,” Zhu explains. “Our work represents an excellent example of divergent evolution, where structural alteration in an ancestral scaffold led to functional shift of proteins from fighting against microbes to attacking prey.”3

The fossil record reveals marine scorpions that were larger than those we see today and also scorpions with proportionately larger claws and smaller tails than those alive today. Evolutionists believe scorpions had to evolve smaller tails with venom in order to survive on land. Zhu says, “I guess the emergence of toxins from defensins is a consequence of adaptation of scorpions to their decreased size that increases difficulty in capturing prey when they emerged from the seas.”4

Because they were able to genetically engineer this biochemical transformation in the laboratory, Zhu’s team believes scorpions evolved their venom from an ancestor shared with insects. They claim to have solved the “puzzle” by establishing the “evolutionary relationship” between these two different kinds of animals. However, the ability to perform these operations in the laboratory is not evidence that any kind of animal evolved into a different, more complex kind of animal. Similar chemistry does not demonstrate common ancestry.

Chemical analysis of various venoms has in recent years revealed that some toxic components are biochemical variants of substances with physiological roles elsewhere in an animal’s body. Genomic analysis can even reveal what mutations might have altered the molecular structure of a nontoxic protein to produce a poison. These discoveries may help us understand the origin of many defense and attack mechanisms that developed in God’s perfect creation as a consequence of the curse for man’s sin.

Mutations affecting previously harmless molecules may have been responsible for developing some toxins, but such changes represent only variations within each particular kind of animal. Revelations about the nontoxic components of mamba venom as well as the genetic basis for cobra venom illustrate this biblical biological principle—that organisms reproduce and vary within their created kinds.

The researchers in this study, however, are not discussing how genetic variations can produce adaptations within a kind of animal. They are instead claiming their chemistry demonstrates insects and scorpions share a common evolutionary ancestor. The fact that a gene encoding an insect protein can be genetically adjusted to produce a portion of a scorpion neurotoxin is their “evidence.”

Similar designs result not from evolutionary ancestry nor from convergent evolution but rather from having a shared Creator.

They admit, “Although the evolution of a Kv [potassium] channel-targeted toxin from an antimicrobial insect defensin has been demonstrated experimentally, it does not necessarily follow that this is the way that the event actually happened, and that the insect defensins identified here are valid surrogates of the true evolutionary intermediates.”5 Yet because they imagine that such evolution could and must have occurred, they interpret their work as “convincing evidence that venomous insect-derived defensins are valid surrogates of an evolutionary intermediate in linking defensins and α-KTxs [scorpion neurotoxins].”6 They conclude, “It is reasonable to infer that after scorpions diverged from other arthropods, an ancestral STS-containing defensin, similar to those identified here from the venomous insects, could be firstly developed and subsequently converted into a toxin through a single genetic event.”7 Thus, while they do not claim to have necessarily identified the “true evolutionary intermediates,” they believe their work proves there had to be such evolutionary intermediates between insects and scorpions.

But does this genetically engineered chemistry show that scorpions and insects share an ancestral connection? Not at all. The fact that a genetically engineered mutation in the laboratory can transform an insect protein into a toxin biochemically similar to the business end of a scorpion toxin does not connect the evolutionary dots between different kinds of organisms. Zhu’s team has not demonstrated the evolutionary transition they set out to show.

Biochemical similarities, like other similar designs seen in different kinds of organisms, are exactly what we expect to see in organisms designed by a common Designer—the Creator God—to live in the same world. It is likewise no surprise to find similar proteins and similar gene sequences in different species. Similar designs result not from evolutionary ancestry nor from convergent evolution but rather from having a shared Creator who created all living things to live in the same world.

Be sure to read “Scorpions—Armed and Dangerous” to learn more about the incredible designs God bestowed on the scorpion and also to explore the sorts of adaptations in these designs that make the scorpion scorned by many in this present sin-cursed world.

Previous Article Did Humans Evolve from a Fish out of Water? Next Article Why Do So Many Birds Fly in a V Formation?