The Curse ushered in a brutal world of animals hunting and killing each other to survive. Even in the midst of this death and violence we see a silver lining. God has lavished His care and mercy even on the smallest of creatures, which have an arsenal of defenses to thrive in a world teeming with hungry predators.

Have you ever wondered what living creatures were like before the Fall? We can easily imagine many creatures looking and behaving in much the same way as they do today. We can envision young antelopes leaping in play; butterflies sipping nectar from God’s ornamental flowers; birds and frogs serenading each other and their garden lords. No animals were fleeing in fear or squawking to warn their kin of predators.

God filled the earth with a marvelous array of defensive structures to remind us about His mercy.

But what about those animals today that maim, kill, and consume­­—panthers, pit vipers, and piranhas? Clearly creation has changed since sin entered the world, and the changes appear designed to get our attention. When we see death and suffering, we know deep down something has gone wrong. Creation groans, for earth is not how it ought to be. This gruesome aspect of creation—death by predators—vividly reminds believers of the consequence of man’s sin.

But something else surrounds the dark cloud of the Curse: the silver lining of God’s enduring mercy. In this dark world, God has bestowed protection on many creatures that are on the predator’s menu. All around us are reminders of God’s care, even to the smallest of creatures—such as arthropods, a broad category of animals that includes spiders and insects.

God appears to have bestowed nasty-tasting or poisonous chemicals on countless insects and other arthropods to protect them from hungry predators. Common examples are stinging bees and wasps. (Incidentally, some insects don’t have stingers or other delivery mechanisms. So predators get the “yuck” message when they eat one, which may prevent the next bug from becoming a meal.)

One of my favorite chemical-containing critters is the whip scorpion, or vinegarroon, which tells predators to bug off before they try to eat it. It has a built-in nozzle at the base of its tail, which it aims and fires at the threat, like a can of mace. The spray combines two chemicals, which work together. First, the caprylic acid cuts through the waxy coat of the arthropod predator. Then the acetic acid (vinegar) penetrates to send a clear message, “Don’t mess with me.”

Bright coloring often goes hand in hand with defensive chemicals. The creature’s body serves as a billboard, warning would-be predators about the danger of poisoning. Such coloring is like the skull and cross bones flag on a pirate ship. If the predator has previously had an unpleasant encounter, it may associate the bold or bright color pattern with a bad taste or an excruciating sting. 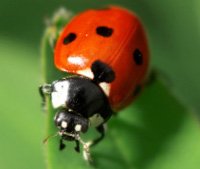 The bright red and black markings of a ladybug warn predators that they are not a tasty treat. © Djun|Dreamstime.com

Consider ladybird beetles. Their colorful armor is a warning. If harassed, they squeeze out a foul-tasting substance from their joints and seams. Similarly, wasps (and a variety of bees) have their own bright colors to remind predators that, if threatened, they will retaliate with stings.

Camouflage refers to the color patterns, behaviors, and shapes that God designed to allow a creature to match its surroundings, making it very difficult for predators to see.

A good example is the walking stick. As its name implies, it looks like a stick and is almost indistinguishable from surrounding twigs. The joints and seams on its six legs match the pattern of how smaller twigs branch from larger twigs at their nodes. It also walks with slow, wobbly, and halting strides that mimic the gentle sway of the slender branches on which it walks.

The list of camouflage designs is seemingly endless. Certain treehoppers, for example, look like thorns. The dead leaf butterfly folds its wings to look like a dead leaf, complete with a leaf stalk (petiole) attached.

A number of insects are pretty skilled at startling predators. Usually they have some sort of hidden marking that’s suddenly displayed when they are threatened.

One example is the polyphemus moth. The large eye-spots on its hind wings are normally covered by the front wings, but when approached by a predator, the front wings shoot forward, exposing the eyespots. These paired ogling “eyes” are known to startle some potential predators. 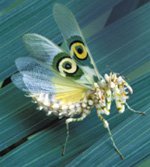 Certain praying mantises perform this stunt as well, but they also brandish their formidable front legs in case the eyespots aren’t threatening enough.

Reflex immobility—this is entomology’s fancy term for playing dead. Many beetles practice this stunt. It consists of simply not moving at all. Some predators are stimulated by walking, running, or wriggling. Inactive prey doesn’t attract attention. This reflex can cause the predator to lose track or interest and wander off to eat something that looks alive.

Autotomy literally means to “cut self.” Essentially, these critters have quick-release appendages that snap off at the least tug from a predator. A number of insects have this peculiar ability, but walking sticks are real pros at it. When a predator seizes a leg, the appendage pops off at its base and usually continues to twitch for some time, occupying the offending predator, which fancies itself a successful hunter. Meanwhile, the walking stick hobbles away with five legs. If it hasn’t reached adulthood, the walking stick will replace the leg during subsequent molts (shedding its outer layer), though the new leg may be smaller in size.

Too Sophisticated for Random Mutations

The defense mechanisms of just about every group in the animal kingdom could provide us with a lifetime of enjoyable study. Many arthropods are particularly well-equipped for defense. Their defensive features require interconnected designs in anatomy, physiology, and behavior, many of which are too sophisticated and complex to give credit to random degenerative mutations. It appears, instead, that these abilities were genetically present in the original creatures, but activated after Adam sinned, when God cursed the creation.

The glory must go to God for the amazing creativity and care that He lavishes on so many creatures that would otherwise be defenseless in a fallen world full of predators.

Previous Article Designed to Kill in a Fallen World Next Article Why Do God’s Children Suffer?