Did caffeine evolve again and again or did our Common Designer provide many plants with the genes to make it?

Coffee—love it or hate it—it affects your life, and even your language. Whether you start your day with “Coffee, black”1 or take your “coffee break” at the water cooler, whether you occasionally chat “over coffee” or get frequent-flyer-miles from your coffee shop app, whether you contribute to the economic welfare of millions who depend on coffee as their cash crop, argue Brits get a better buzz from tea, or believe “Things go better with Coke™”—the key chemical in “the most traded commodity after oil” has some impact on your life.2 Now an international team of researchers has sequenced coffee’s genome and concluded that convergent evolution produced caffeine more than once.

Caffeine is found in a dizzying variety of plants including coffee trees, tea bushes, yerba maté, cacao, kola, guarana, and even citrus trees. (The nectar of orange and grapefruit blossoms is caffeinated, as is the nectar of more familiar caffeine-producers, pleasing bees who come back for more.) The researchers sequenced Coffea canephora, the diploid “robusta” species that supplies nearly a third of the world’s coffee crop. Coffea canephorais one of the two parents of the hybrid tetraploid species Coffea arabica, which makes up most of the rest.3

Caffeine, a natural plant alkaloid, is the most popular and morally acceptable psychoactive substance in the world. Carl Zimmer of the New York Times writes, “Caffeine may be a drug, but it’s not the product of some underworld chemistry lab; rather, it’s the result of millions of years of plant evolution. Despite our huge appetite for caffeine, however, scientists know little about how and why plants make it.” He adds, “The new study . . . sheds light on how plants evolved to make caffeine as a way to control the behavior of animals—and, indirectly, us.”

Caffeine is built from a molecule called xanthosine through a series of enzymatically controlled steps. Enzymes (called N-methyltransferases) sequentially add “methyl” groups to key spots on the molecule, and the result is caffeine. The researchers found that Coffea canephora has 23 genes that produce various N-methyltransferase enzymes. Because these genes appear in different places on coffee genes than they do on tea and cacao genes, the team believes the series of enzymes needed to produce caffeine evolved independently in different plant lineages.4

Molecular biologist Robert Henry, part of the team that dug up coffee’s genetic roots, says, “The interesting thing is that caffeine synthesis has evolved separately in each of the three plants. It’s convergent evolution. Clearly caffeine is a particularly well-designed or biologically effective molecule if it has evolved independently at least three times.”5

Caffeine is built in a three-step process from xanthosine. Enzymes sequentially remove a “methyl” group (CH3) from “SAM” (S-adenosylmethionine) and attach it to a nitrogen (N) atom on the molecule. Some of the N-methyl transferase enzymes are shown here in abbreviated form (XMT, MXMT, DXMT). This pathway, with theobromine as an intermediate, is the most efficient enzymatically controlled pathway plants use to make caffeine. Image by F. Denoeud et al., via Science.6

The evolutionary researchers believe that the various kinds of virtually unrelated caffeine-producing plants share a very ancient ancestor that had an enzyme that methylated xanthosines. They believe this enzyme mutated again and again to make all the N-methyltransferases in play today. Coauthor Victor Albert explains that the many enzymes in the biosynthetic paths to caffeine are “all descendants of a common ancestor enzyme that started [messing] around with xanthosine compounds.” Albert says that coffee’s genetic ability to make caffeine is “an accident frozen in place very likely by the influence of natural selection.”7 How that hypothetical ancestral enzyme, much less the cellular machinery to build it in the first place, came to be, evolutionists of course cannot explain.

Plants produce caffeine from xanthosine through either of two biochemically distinct, enzymatically controlled pathways. Both production pathways coexist in tea and coffee plants, but the more efficient pathway dominates.8 It is not the different production pathways that the researchers are referring to when they say the caffeine evolved at least twice, but, the fact that the genes encoding the enzymes for the primary production pathway are nested in different locations on the genes of coffee, tea, and cacao.

Until recently the genetic basis for caffeine production in coffee plants had not been explored. If the genes needed to produce caffeine always occurred in similar places on plant chromosomes, evolutionists would assume they had evidence that caffeine production evolved once in a distant ancestor and got passed down through the ages. Now they know that isn’t the case. Therefore, they conclude caffeine production was so well-reinforced by natural selection that it evolved again and again. 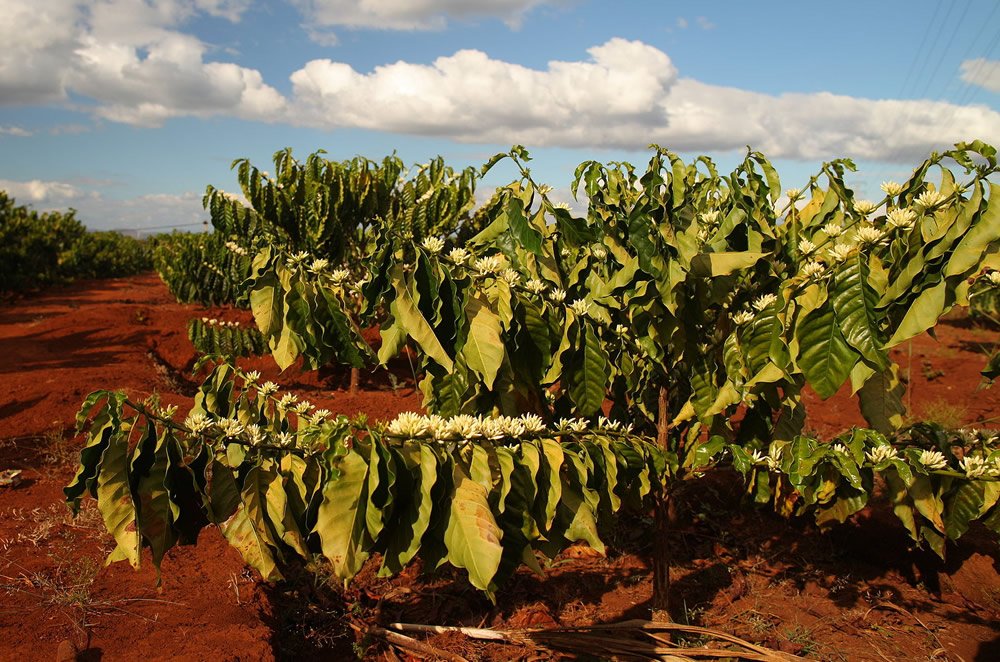 As a bee gathers nectar from a coffee blossom it gets a little bit of caffeine—enough to bolster its memory of the scent so it will seek it out again and again but evidently not enough to seem bitter to the bee. A little caffeine equips these plants to attract the faithful attention of their pollinators. Image by Shansov.net, via Wikimedia Commons.

Surviving and Thriving on Caffeine

Plants that produce caffeine offer a memory-enhancing buzz with a little caffeine in their nectar to pollinating bees, which then return again and again. Scientists also suspect caffeine might be a natural pesticide, supposing that the high concentration of caffeine in some caffeine-producing plants’ leaves might give a bitter jolt to leaf-chomping insects. Some suspect that rotting caffeine-rich leaves are also a deterrent to the germination of competing plants. 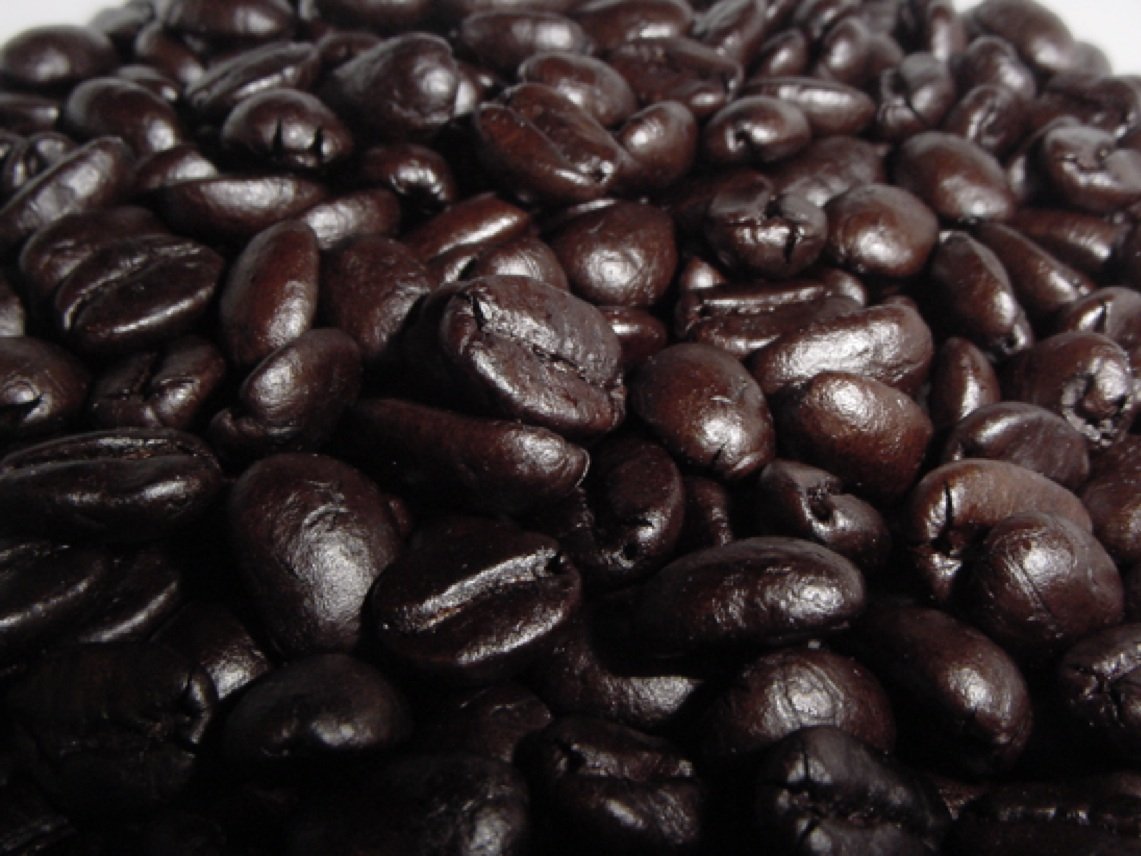 The Star Trek television series took coffee where no bean had gone before, but these dark roasted beans are on their way to being what Star Trek Voyager’s Captain Janeway called “the finest organic suspension ever devised” to please Earth-bound coffee connoisseurs.9 But how did coffee and many other unrelated kinds of plants come to make caffeine, and why? Image by Dodo, via Wikimedia Commons.

Evolutionists thus cite multiple reasons that natural selection would have favored the prosperity of caffeine-producing botanicals each time the series of enzymes needed for it evolved. “It’s a very cool fact that you can use one molecule to do a negative thing and a positive one,” comments neurobiologist Julie Mustard. “It may be a coincidence of biology that caffeine-producing plants have a similar effect on us—toxic at high doses but enhancing our brains at low doses. They’re manipulating all of us.”10

It is indeed “a very cool fact,” but it isn’t molecules-to-man evolution, or even chemicals-to-caffeine evolution. Natural selection could not have produced the information to build the enzymes to synthesize caffeine. The presence of caffeine in many different kinds of plants suggests instead that God designed many kinds of plants with the ability to make caffeine. After all, caffeine may offer many benefits to those plants—positively reinforcing the cooperation of pollinators, discouraging excessive munching by insects, and controlling the growth of competitive plants nearby. This is just a good design, not an example of evolution.

Variations in the Genome

The variations available in coffee’s genome could revolutionize the industry and benefit all. In addition to finding coffee’s genes for linoleic acid production, which affects the aroma and flavor of coffee, the researchers discovered disease-resistance genes that could help crop scientists produce hardier strains. In his editorial commentary “A Wake Up Call For Coffee,” Hebrew University Plant Sciences expert Dani Zamir calls attention to the economic importance of figuring out the potential phenotypic qualities associated with the newly identified genes. He writes, “The key for ensuring that coffee can survive as an affordable crop lies in the genetic variation found in African species.”11

Molecular biologist Robert Henry, part of the team that dug up coffee’s genetic roots, says, “We’re trying to understand the genetic control of the composition of the bean and then subsequently how that influences the ultimate quality of the coffee.”12 Furthermore, “We’d like to be able to extend the range over which we can grow coffee,”13 Henry says, hoping to see quality coffee someday grown successfully in non-tropical climes. He says, “This technology allows us to think about tuning coffee characteristics to a range of different market segments.”14

God created all kinds of plants and animals about 6,000 years ago, and this research supports the idea that God designed many kinds of plants with the ability to make caffeine. As God’s account in Genesis chapter one indicates and biological observations confirm—plants and animals are designed to reproduce after their kinds. We see in biology that great biodiversity develops, sometimes very quickly, as plants and animals vary within their created kinds, expressing much of the variety available in their genomes as well as variations produced through mutations and other ordinary genetic processes. It is, as Zamir notes, the genetic variety available within the coffee genome that produces countless phenotypic variations. That’s how biology works today, and there is no reason to imagine that it worked differently in an evolutionary past.