Creature Teachers at Your Local Zoo

At Your Local Zoo

You don’t have to travel far to enjoy a getaway that will also build your biblical worldview. In times of economic woe, just a little imagination and planning can transform a trip to the local zoo into an unforgettable “staycation.”

The book of Job includes an interesting command. We are told in poetic language to “ask the beasts, and they will teach you . . . and the birds . . . and the fish.” So what can the animals teach us? “That the hand of the Lord has done this, in whose hand is the life of every living thing and the breath of all mankind” (Job 12:7–10).

As warm weather returns after the long winter, a visit to the local zoo is a great way to enjoy a mini-vacation, especially in tough financial times. What great memories! Older adults relish reliving past escapades of riding camels, feasting on cotton candy, and reveling in a day outdoors. Young families look forward to making new memories.

As our day at the zoo begins, signposts point to the many animal exhibits, and we must decide where to begin. Even these signposts, pointing the way to cats, elephants, and other readily identifiable animals, teach us something about the Creator. He created all living things “according to their kind” (Genesis 1:21). 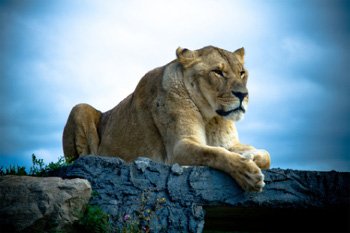 The differences between the original created “kinds” (roughly “families” in modern scientific terms) are easy to see. When you visit the cat exhibits look for Felidae in the signs. Lions, tigers, pumas, and many other species all belong to the same original cat family. © Shauna77 | Dreamstime.com

The “kind” is the basic biological unit within which every animal species belongs. In His infinite wisdom, God knew that the creatures would need to adapt to many different conditions in order to survive in a fallen world, so He enabled the original kinds to adapt to many different environments. Yet no matter how much animals vary within each kind, it is still easy to recognize how a cat differs from a dog or a rhinoceros.

The zoo’s signposts point to a major problem in evolution’s claim that all creatures evolved from a single ancestor. Nowhere do we find a seamless continuity between the major groups of animals. To the contrary, each kind has a vast, unbridgeable gulf separating it from other kinds.

It usually doesn’t require a scientist to identify these broad divisions between the original “kinds” (roughly “families” in modern scientific terms). When you visit the cat exhibits, for example, look for Felidae (the cat family) in the signs. Lions, tigers, pumas, and many other species belong to the same original cat family. In fact, many of the different species of wild cats can still be crossbred to produce offspring.

Knowing the challenges that each kind would face as it spread over the earth after the Flood, the Creator built into every kind the information necessary to produce many well-adapted species. In the process He marvelously reveals His love of variety. 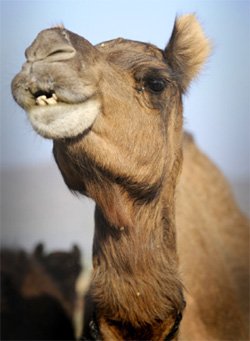 The camel is specially designed for hostile climates. Notice the long hairs that shield the ears, eyes, and nose from sand. © Neneo | Dreamstime.com

It is time to visit the camel family and take a ride, if available. At the zoo, every animal is noteworthy, but the camel’s special designs—from head to toe—are especially obvious. As you stroll through this part of the zoo, note how the “ship of the desert” seems specially designed to transport humans in hostile climates where no other beast of burden could survive.

Consider his face: long hairs shield the openings of the ears, eyes, and nose from sand. His toes: the flexible, wide foot pad spreads out like a snowshoe, keeping the camel from sinking into soft sand.

Camel hair is famous for its ability to insulate from both hot and cold. Take special note of how the camel’s hair rises straight up from the skin, then folds into a layer without lying directly on the skin. No other animal has this design. In this way, the evaporation of the water cools primarily the skin rather than the hair. This system makes the most efficient use of the precious water, which is released into the air for the purpose of cooling.

The camel has a unique gait, too, that allows him to continue for many hours without changing pace or wasting energy. Unlike most other animals, he is able to survive losing up to 25% of his body weight in water. Other animals and humans would die because their blood would be too thick to pump. We can easily see God as the Master Designer through this marvelous beast.

As you walk over to the llama exhibit, notice that it belongs to the same family as camels (Camelidae)! Just as one species is designed to survive in the post-Flood deserts of Africa, another species is designed to thrive in the cold, high mountains of South America. Can you find other special designs that help llamas endure the cold? Despite their differences both belong to the same original created kind.

Next we pass by the peacocks and arrive at the aviary. The variety of colors and design takes away our breath! Such beauty is one of the most obvious testimonies to God’s glory, yet it is easily overlooked. So much beauty is impossible for purely naturalistic evolution to explain, because biological beauty requires lots of metabolic energy and natural selection should minimize the waste of biological energy for nonessentials.

All other things being equal, an organism that puts more energy into survival and less into being beautiful should be more fit. Natural selection of living things, which began after the Fall, is removing the variety and beauty of animals.

Peacock feathers, in particular, have long been the subject of debate. Charles Darwin claimed that the peacock had beautiful feathers because the female chose beautiful males. But this only pushes the question back one step. Why does the female choose the less fit male? Wouldn’t the female who chooses the more fit male generate more fit offspring?

So the abundance of biological beauty at the zoo testifies to the enormous beauty that must have been in the initial creation. Only a few thousand years have passed since Adam’s sin brought death and decay into the world. 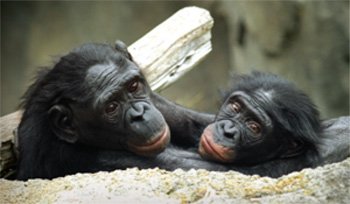 Although humans have some physical similarites with apes, an impassible gulf separates us from them. Even if we have 99% genetic similarity, this still means over 30 million molecular differences! © iStockphoto.com | kevdog818

No trip to the zoo would be complete without a visit to the primate house to see the chimpanzees. Evolutionists enjoy pointing out a similarity between chimp and human DNA (up to 99% by some estimates)1 to affirm their claim that man originated from an apelike ancestor. However, as physically similar as the greater apes are to man, an impassible gulf separates them from us.

Even if the 99% similarity is accurate, the human genome is made of 3 billion molecules, which would leave 30 million differences. That’s a lot of differences! Human DNA has perhaps 60% similarity with fruit flies, but that doesn’t mean we’re like them! All life requires basic chemical processes, and genes code for these. So we would expect all life to have many genetic similarities, regardless of their origin.

Perhaps you can’t discuss all the questions while standing in front of the chimp exhibit. But seeing the chimp could serve as prologue to a deeper look at Scripture, which tells us about God’s special love as He created us in His image (see p. 54).

One more “must” on any zoo tour is a visit to the lion exhibit. What does the lion “teach us” about God? The lion is mentioned more than 100 times in Scripture, so he plays an important role in God’s revelation, not only as a mighty creation but as a spiritual warning. Some time after the Fall, the plant-eating lion became a fearsome predator. His change in diet reminds us of the impact of sin and God’s judgment on the earth. Yet God has promised a future “restitution of all things,” when even lions will eat plants as they once did in the beginning (Acts 3:21).

Jesus Christ was prophesied to be the Lion of Judah (Genesis 49:9). By dying on the Cross as an innocent lamb, He overcame death, the world, and the devil. His humble sacrifice for sin illustrates His love and mercy, and shows His worthiness to rule forever over His people. God marvelously illustrates Christ’s power, strength, and great purpose through this beautiful beast, the lion.

With just these few samples, you can see how a trip to the zoo can be used to glorify God and teach others about Him. Don’t miss this special opportunity the next time you visit the zoo!