Image by Syrio, via Wikimedia Commons.

Juvenile leafhoppers synchronize their back legs with gears

The first functioning mechanical gears to be discovered in a living organism1 were reported in a 2013 Science article by University of Cambridge zoologists. These working biological gears are found in the hind legs of the Issus coleoptratus leafhopper nymph.2

These insects, which mainly hop around on European climbing ivy,3 are only a couple of millimeters in length, but with one mighty jump they can spring forward more than a meter at a velocity up to 3.9 meters per second4 (nearly nine miles per hour). As noted in Popular Mechanics, “In 2 milliseconds it has bulleted skyward, accelerating at nearly 400 g’s—a rate more than 20 times what a human body can withstand.”5 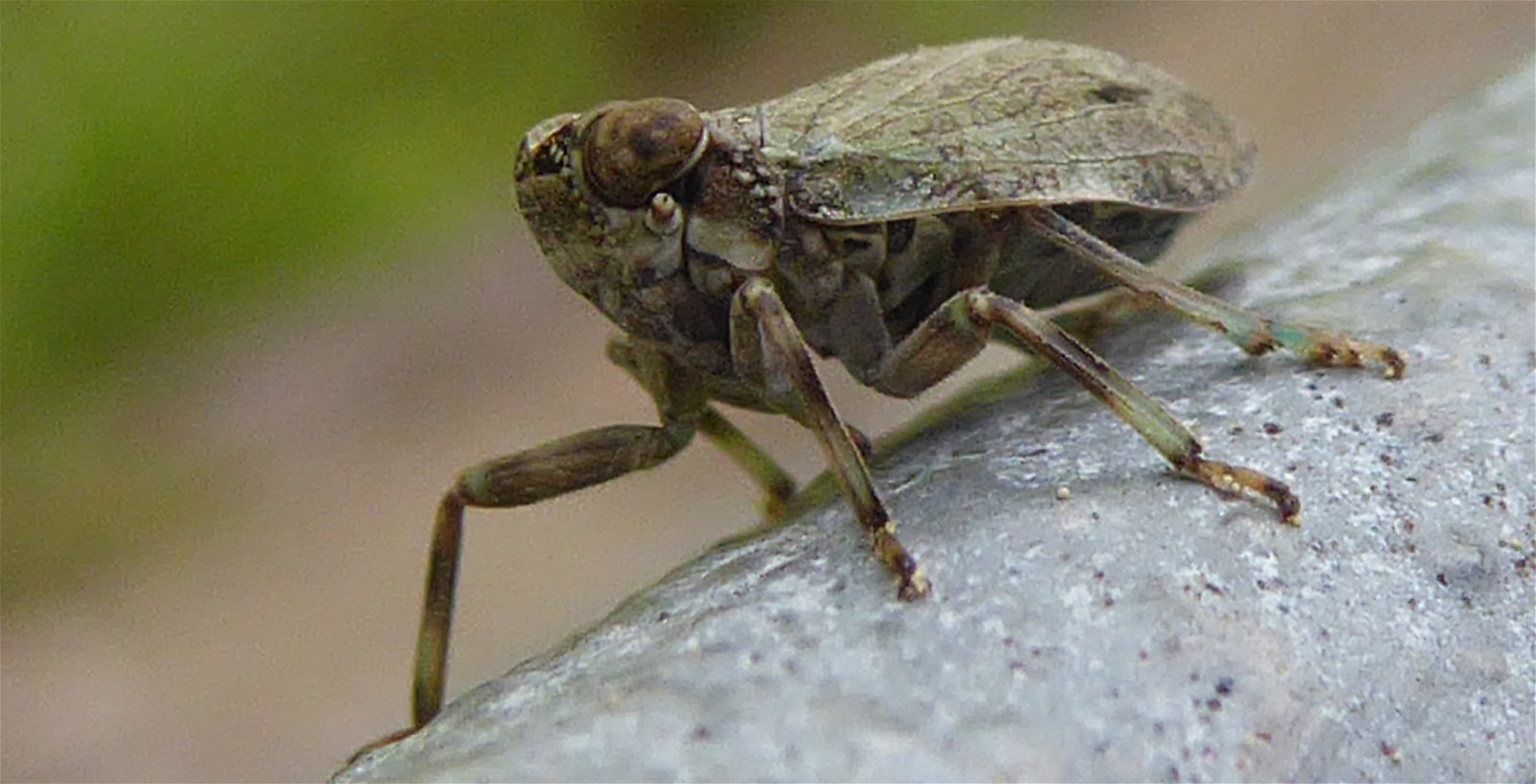 The Issus leafhopper nymph propels itself forward at nearly nine miles per hour, but if its hind legs didn’t push off at precisely the same time, it would spin out of control. Yet nerve impulses don’t travel fast enough to pull off this feat. The solution God designed for this tiny creature’s locomotive needs is a tiny set of gears.

Imagine what would happen if their back legs didn’t push off simultaneously! “As the legs unfurl to power the jump,” lead author Malcolm Burrows says, “both have to move at exactly the same time. If they didn't, the animal would start to spiral out of control.”6

Cambridge zoologists report that evolution solved the flightless leafhopper’s needs through mechanics rather than neuromuscular control. “The gears in Issus,” they write, “demonstrate that mechanisms previously thought only to be used in man-made machines have evolved in nature.”7 Lead author Malcolm Burrows comments, “Jumping is one of the most rapid and powerful things an animal can do, and that leads to all sorts of crazy specializations.”

Ten to twelve tiny teeth—just 15–30 millionths of a meter tall8—are located on the inner surface of each hind leg. These curved cogs mesh with each other under the abdomen as the insect cocks its legs to jump, forcing the legs to remain in unison as it takes off. The gear cogs remain engaged and roll past each other—at a rate of nearly 50,000 teeth per second— throughout the propulsive movements.9 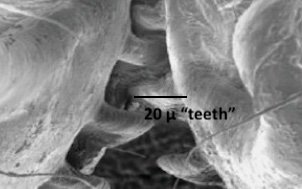 Leafhopper gear teeth are asymmetrically curved and point toward their point of contact. Man-made gears need to rotate in both directions and so have symmetrical teeth, but leafhopper leg teeth are designed only for one-way motion: these insects have no need to leap backwards. Co-author Gregory Sutton says this set of gears is built for “high precision and speed in one direction. It’s a prototype for a new type of gear.”11

Adult leafhoppers seem to outgrow their need for such “training wheels,”12 however. The insects lose their gears in the final molt before adulthood. Adults lack the leg gears, but they keep their larger legs in line with surface friction. According to Duke University biomechanics expert Steve Vogel, many other insects use friction to ensure leg synchrony. Commenting on the discovery, Vogel says, “There are a lot of friction pads around, and they accomplish pretty much of the same thing. So I wonder what extra capacity these gears confer. They're rather specialized, and there are lots of other jumpers that don't have them, so there must be some kind of advantage.”13

The adult jumping ability does not suffer from the loss of gears, as they achieve even greater take-off velocities—up to 5.5 meters per second (over 12 miles per hour) within a millisecond.14 The researchers suspect the friction possible between the larger adult legs may be even more effective than gears at synchronizing the legs.15

The tiny teeth can break, the researchers observed. While juveniles molt multiple times and could therefore replace a broken gear tooth, an adult with a broken gear tooth would be stuck: “The whole system might slip, accelerating damage to the rest of the gear teeth,” Sutton suggests. “Just like if your car has a gear train missing a tooth. Every time you get to that missing tooth, the gear train jerks.”16 So it is good for the insects that the adults outgrow their need for gears.

Though the nerve impulse that triggers the leap lasts a millisecond, the legs spring within 30 microseconds of each other. A microsecond is a millionth of a second, and is a thousand times shorter than the millisecond nerve impulse. The insect’s nervous system is therefore physically incapable of synchronizing its back legs, but these anatomical gears make every leap picture perfect.

This precise synchronisation would be impossible to achieve through a nervous system, as neural impulses would take far too long for the extraordinarily tight coordination required. By developing mechanical gears, the Issus can just send nerve signals to its muscles to produce roughly the same amount of force—then if one leg starts to propel the jump the gears will interlock, creating absolute synchronicity.

In Issus, the skeleton is used to solve a complex problem that the brain and nervous system can't. This emphasises the importance of considering the properties of the skeleton in how movement is produced.

“We usually think of gears as something that we see in human designed machinery, but we've found that that is only because we didn't look hard enough,” says co-author Gregory Sutton. He adds, “These gears are not designed; they are evolved—representing high speed and precision machinery evolved for synchronisation in the animal world.”

We might well ask just how Sutton knows the nymph’s gears were not designed. While he was able to use high-speed video to record the leafhopper’s leap and scanning electron microscopy to unveil its anatomy, he certainly was not able with his equipment to peer back through the mists of time to its origin. Sutton’s declaring that this is not design but evolution is more than presumptuous for a scientist in light of the fact that it is impossible to scientifically observe the origin of these biological gears, and rather appears to be just an attempt to “head creationists and intelligent design advocates off at the pass” by fiat. His remark is an expression of his worldview and his desire to explain this biological wonder without an intelligent Designer, not a conclusion based—like the actual observations of the gears themselves—on experimental science. Such tactics are sadly not uncommon among those who feel the need to proselytize for their godless religion of naturalism.

Evolutionists choose to ignore the possibility that our Creator engineered such marvelous mechanisms as that seen in this tiny creature.

Evolutionists choose to ignore the possibility that our Creator—or even a nameless intelligent designer—engineered such marvelous mechanisms as that seen in this tiny creature because they cannot observe the Designer’s hand in the laboratory. But the fact is that they cannot observe in the laboratory the evolutionary origin that they confidently believe occurred either. They also cannot demonstrate any mechanism by which random evolutionary processes can produce irreducibly complex designs. Observational science cannot confirm how an unobservable, unrepeatable event in the past occurred. Origins science is historical science and necessarily depends upon worldview-based beliefs about the past for its conclusions. Nothing about this discovery supports an evolutionary origin. No ancestral transitional gear or mechanism for this evolutionary product are even suggested, nor could it be experimentally confirmed if it were. There is no reason to suppose this gear design emerged through evolutionary accidents.

What is reported is a perfectly functioning, finely tuned, irreducibly complex mechanism for propelling these tiny animals safely through the air until they get big enough to go gearless. At that point, they jettison their gears and move on with their lives. And the information for making this complex mechanism is coded in the DNA of this creature. Evolutionists have no scientifically credible explanation for the origin of that genetic information.

What we see in this discovery is another marvelous design by a Creator who reports in His Word that He created each kind of living thing within the first six days of earth’s existence about 6,000 years ago. He created living things able to reproduce variety, but only within their created kinds. Nothing we see in observable biology is inconsistent with our Creator’s claims in His Word.

Be sure to watch the action videos at the end of the Popular Mechanics article to see the bug jump and an amazing close-up of these tiny God-created gears in action.